Formula 1's 2021 concept car has undergone its first windtunnel tests, and according to series chiefs the results of changes designed to improve the spectacle were "excellent"

In conjunction with the FIA, F1's in-house technical team has produced an initial concept ahead of the planned overhaul of the technical regulations for the 2021 season. A vision of that concept from an earlier iteration is illustrated by Giorgio Piola above.

After a phase of CFD (computational fluid dynamics) testing, F1 has now produced a 50% scale model, which has been tested in the Sauber windtunnel in Switzerland.

The 2021 #F1 car model was tested in the wind tunnel and discovered some promising findings ? pic.twitter.com/p3qz8bBAMj

F1 issued a video of the process via its social media channels.

The CFD tests, according to the FIA's head of single-seater technical matters Nikolas Tombazis, showed the 2021 concept sustained a downforce reduction of "5-10%" when in the wake of another car compared to the 45% that current cars receive.

Windtunnel testing has, according to Tombazis, correlated with those previous figures.

"Fundamentally, the CFD was correct," Tombazis told the official F1 website. "There have been no major surprises.

"So there is a 5-10% wake disruption, compared to the current levels of 50%, although it depends on the exact configuration you are testing and so on."

The car features the expected ground-effect package, produced by a pair of dramatic Venturi tunnels, while there is little in the way of the expansive bargeboard packages currently seen on the current generation of F1 machinery.

The changes seen are part of a push to improve the closeness of wheel-to-wheel racing and level of overtaking in F1, without the need for driver aids such as DRS.

There are many similarities with Piola's illustrations based on an earlier iteration of the car, but there is a difference in rear wings.

The newly-released windtunnel model shows a rear wing that transitions directly into the endplate, producing a vortex that sucks in the car's wake to limit the dirty air produced.

Piola's illustration below overlays elements of the 2021 design on a current car. 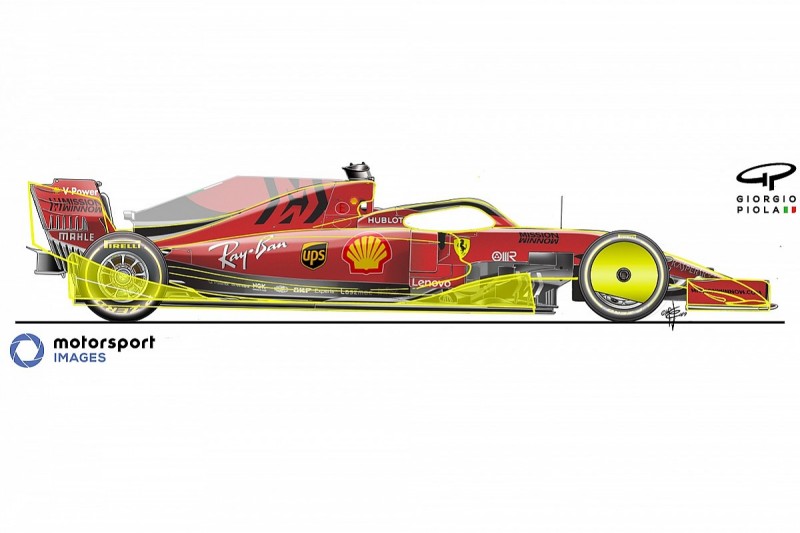 "[Results are] actually beyond what I thought we could achieve when we started the project" said Symonds.

"With the configurations we have got at the moment, the results are exceptional."

The five wing elements allowed currently has been cut to three, attaching at both ends between the nose and endplate to eliminate the 'Y250' vortex - a common tool in creating a barrier between the tyre wake and the floor.

There are also deflectors mounted above the wheel and attached to the front uprights to control the tyre wake.

"The fundamental point of all of this," Tombazis added, "is that we are trying to reduce the losses that the following car would face.

"The simplification of the leading car's aerodynamics also helps for wake performance because on the one hand the front car doesn't have as many methods to control its wake.

"On the other hand the following car, not having all these little, very sensitive devices is less susceptible to disruption."

Further changes seen in the video confirm the reintroduction of wheel covers on the 18-inch wheel rims, along with a reshaped halo fairing to better integrate the design with the car.

F1's self-imposed deadline to ratify the 2021 rules is October, although it is currently unknown if the design seen in the windtunnel has been updated.

The current contingent of teams have also been involved in the process of defining the 2021 rules, having been offered extra time to their simulation allowances to do so.

"The teams have been very good," Symonds added.

"The teams that have had the resources to do it have worked on a number of projects for us, and they are all fully informed of what is going on.

"We have meetings every few months, we send our geometry to them, they then run that in their own CFD environments and they feedback results to us."

F1's windtunnel model vs our 2021 concept

Earlier this week, we released our own concept for how we thought a 2021 F1 car should look.

There are a fair few similarities between our design and the latest hints released by F1, most notably in the decision to connect the nose directly to the centre of the front wing.

But F1's design also attaches the extra two allotted wing elements to the nose, while ours offers a little more leniency to the aerodynamicists by keeping them unattached at the inboard section.

Both pursue the ground-effect aerodynamics with the Venturi tunnels, although F1's concept has a much more pronounced opening underneath the sidepods.

The two concepts both exhibit sleek and simple bodywork, but ours has a number of stylistic choices around the engine cover area - namely, a small shark fin and a different intake system.

Whereas F1's concept opts for a more stylised halo design, we've taken a leaf from IndyCar's book with an aeroscreen head protection system.

In addition, F1 has the deflectors and wheel covers, while we've opted for a different style rear wing - although crucially, both designs appear to omit DRS.

Both cars have been conceived with the same goal in mind of producing a more compelling on-track product. 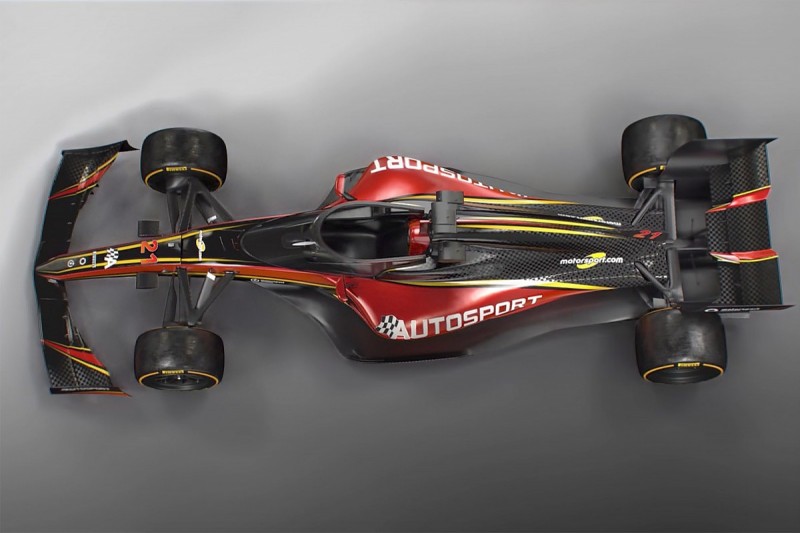