Mercedes has every reason to feel a renewed sense of optimism about its potential in Formula 1, after a raft of upgrades helped it shine in the British Grand Prix.

Although it was helped in part by a smooth circuit, which reduced the occurrence of bouncing, the promise shown by the car changes has left it confident that it is now on the right development path with its car.

As trackside engineering director Andrew Shovlin said: “The route that we want to take now is becoming increasingly clear. And that's encouraging from a development point of view.

“I think this update is the first one along the line that we started to create in Barcelona, and it's encouraging to see that it has worked.”

So let’s take a look at what Mercedes brought to Silverstone and what that tells us about where its focus is right now.

While the list of new items noted in the pre-event automobile display was extensive, a change made to its front wing was not mentioned so did not have much focus on it.

It escaped attention largely because there were no new parts involved. The change is visually disarming, the diveplane, which has been moved down to a lower position on the endplate, is the same item. You can even see the scars on the wing where the diveplane once lived. 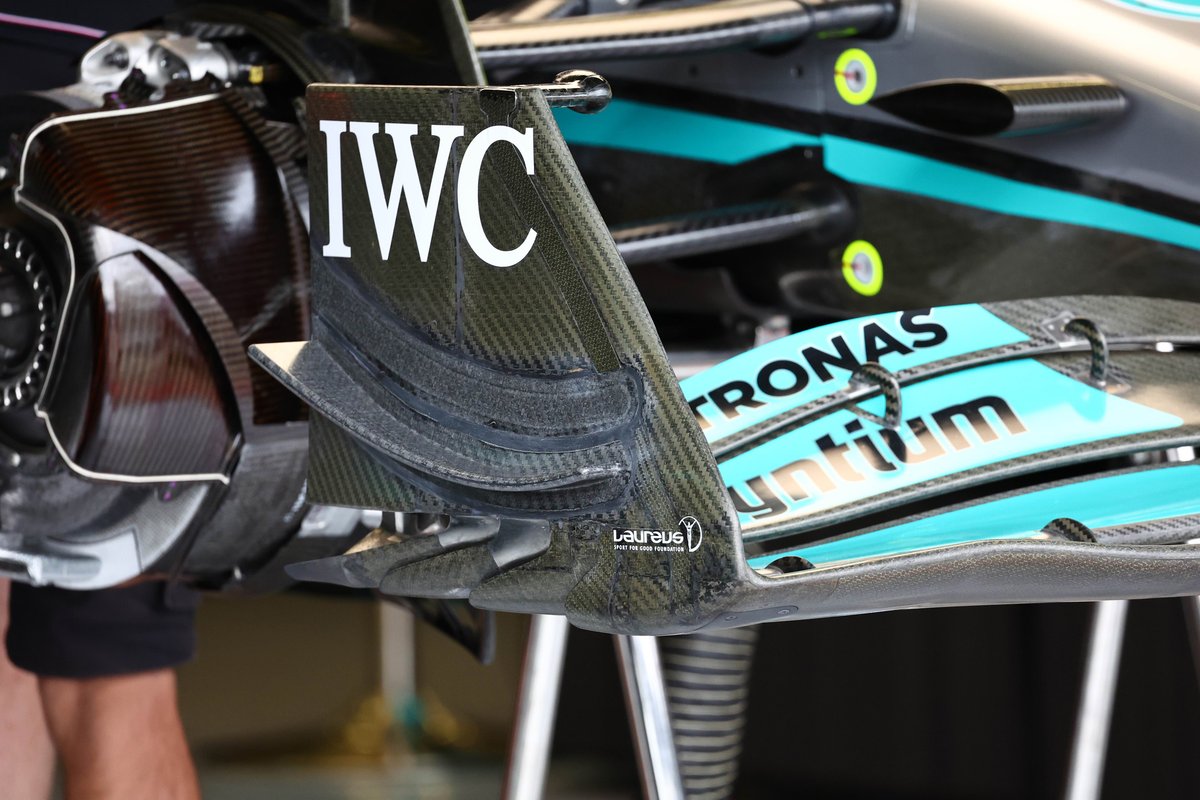 This change might seem quite small, but its repositioning will result in the wing performing quite differently. For example, both the passage of the airflow and how the pressure builds across the surface affects their interaction with the other surfaces, such as Mercedes’ unique flap and endplate interaction below.

This is not only decisive in the performance of the front wing but the ongoing effect the airflow's passage has downstream, with the wake generated by the front tyre affected by the directional change.

The floor, which we’ll cover shortly, has garnered more attention, owing to the problems that Mercedes has encountered this season.

However, the changes made to the car’s front end should not be downplayed either, as it is certainly significant when we consider how it will set up flow structures that will also be beneficial downstream.

The changes are also unique to the Brackley-based squad, proving Mercedes is still somewhat swimming against the current with these new regulations in its attempt to find performance where others have not.

This will be in lock-step with its decision to favour the zero-pod solution in some ways, but its rivals will undoubtedly look at this and see if there are aspects that might also help them unlock performance with their own solutions. 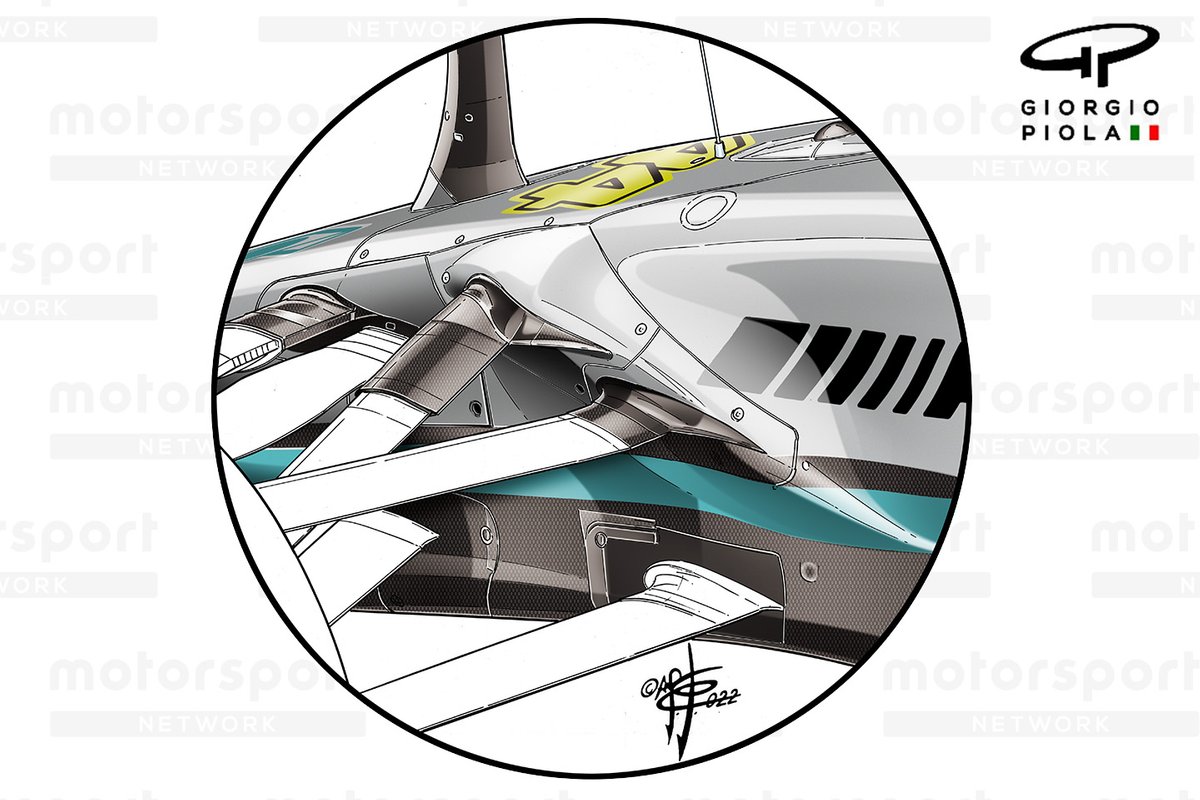 In order to achieve Mercedes’ goals, volume has also been added to the side of the chassis around the suspension members.

The suspension fairings also have fillet extensions added to them to match up with the changes.

These changes will result in the local airflow being downwashed towards the floor and sidepods, with the canards on the side of the chassis also reprofiled and repositioned in order to maximise the new flow conditions that have been created.

In order that these changes are fully maximised there will likely be future optimisations made.

For now though, in order for the aerodynamic aims to be met with the various surfaces improved, both the bib wing and floor fences have also been modified as part of the overhaul. 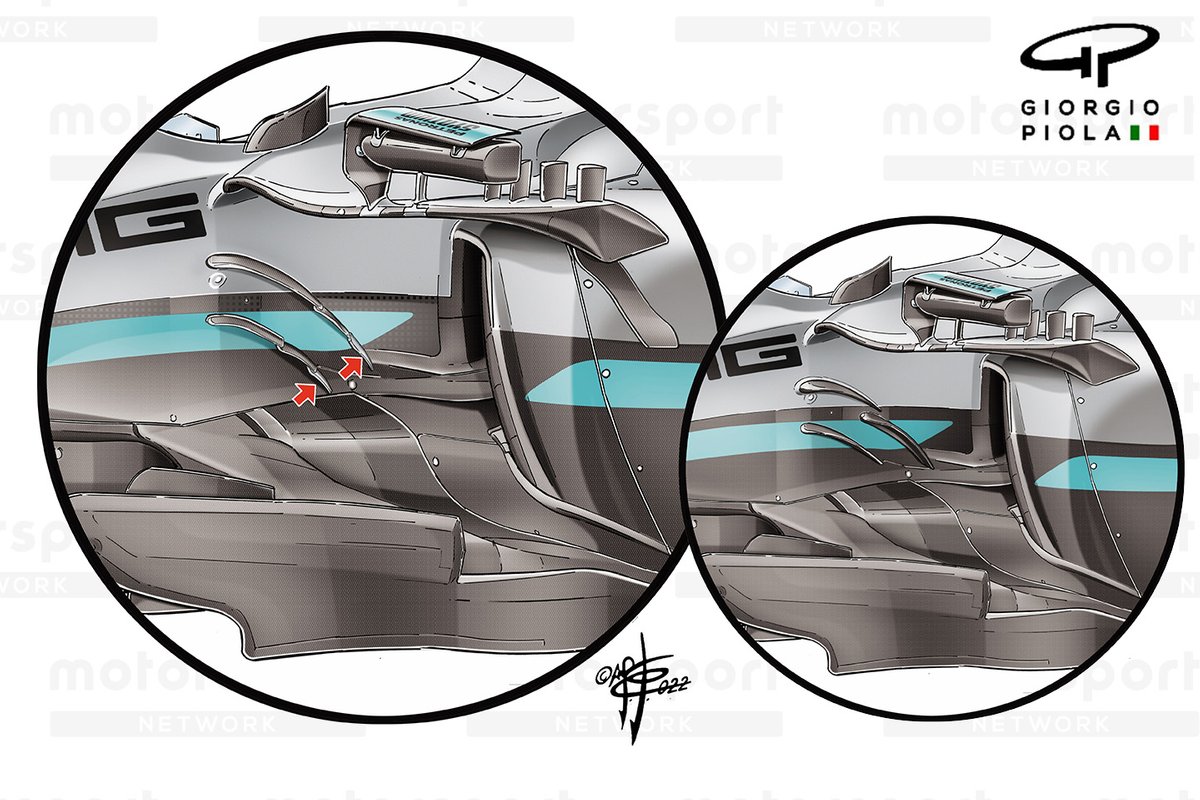 Mercedes also conjured up yet another new design for the edge of its floor.

At the centre of the redesign remains the DNA of the existing solution, with the scythe-shaped edge wing section still forming part of the solution, albeit having been extended forward to feature the upturned extractor section.

This section of the floor is extremely similar to the design employed by McLaren, albeit Mercedes has opted for what McLaren did originally: with only three strakes used to coerce the direction of the airflow as it’s extracted out from under floor - McLaren now has five.

The edge of the Mercedes floor alongside the detached scythe-like section of the edge wing is now fully decked out with a metallic finish to help reduce any flexion that might occur, while a new, more robust stay has been supplanted in the middle of this section too. 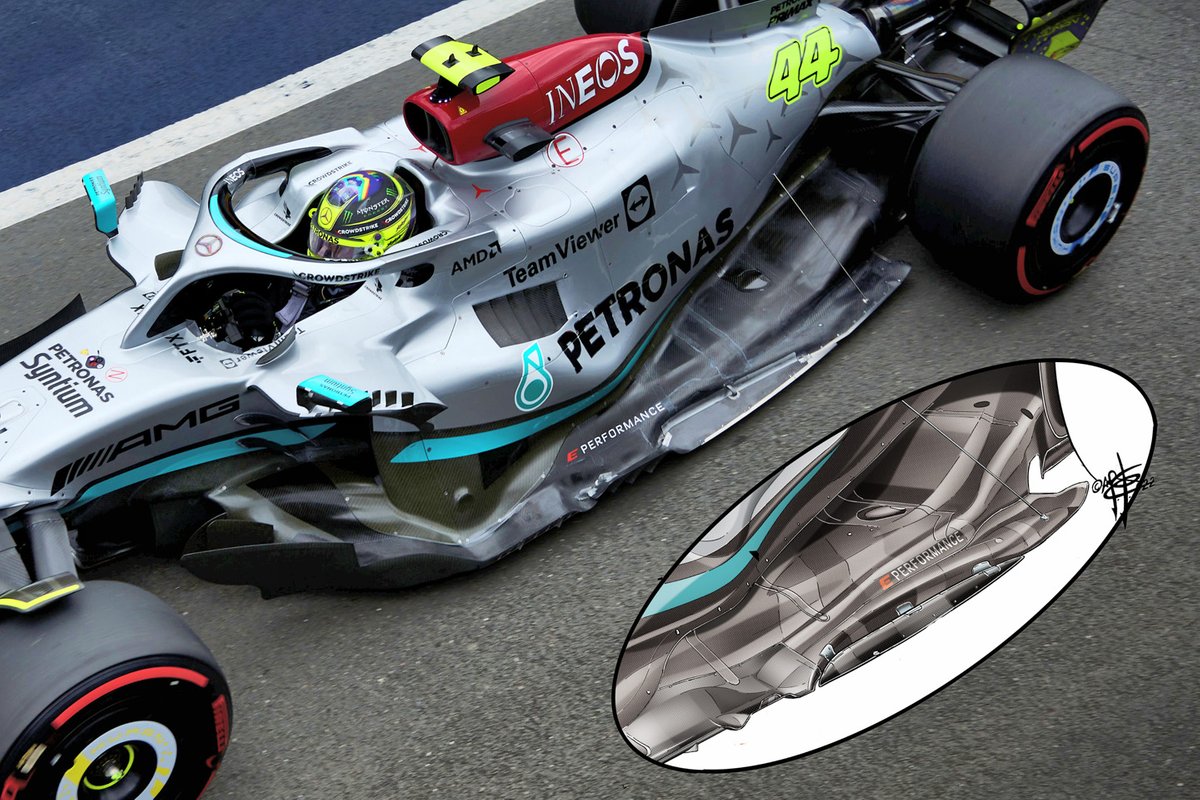 The stays used around the front extractor section also have a dual purpose, with their shape undoubtedly encouraging the production of vortices that will further enhance the performance of the floor’s edge.

All these changes point to Mercedes having a much better idea of how it wants the channel the airflow around and underneath its car – and it is certainly being done in a different way compared to the start of the season.

More recent changes also show that Mercedes’ frame of reference in regards to downforce generated versus the amount of drag it had on its car has missed its target during the early part of 2022.

In recent races it has been reducing that deficit and, for Silverstone, it redesigned the outer section of the rear wing in an effort to offset this further.

The changes made for Silverstone revolve around the rolled tip section, with Mercedes flattening out the upper section, thus stretching the wing’s span and altering how the tip vortex will form (Silverstone, right, below, edge highlighted in yellow). 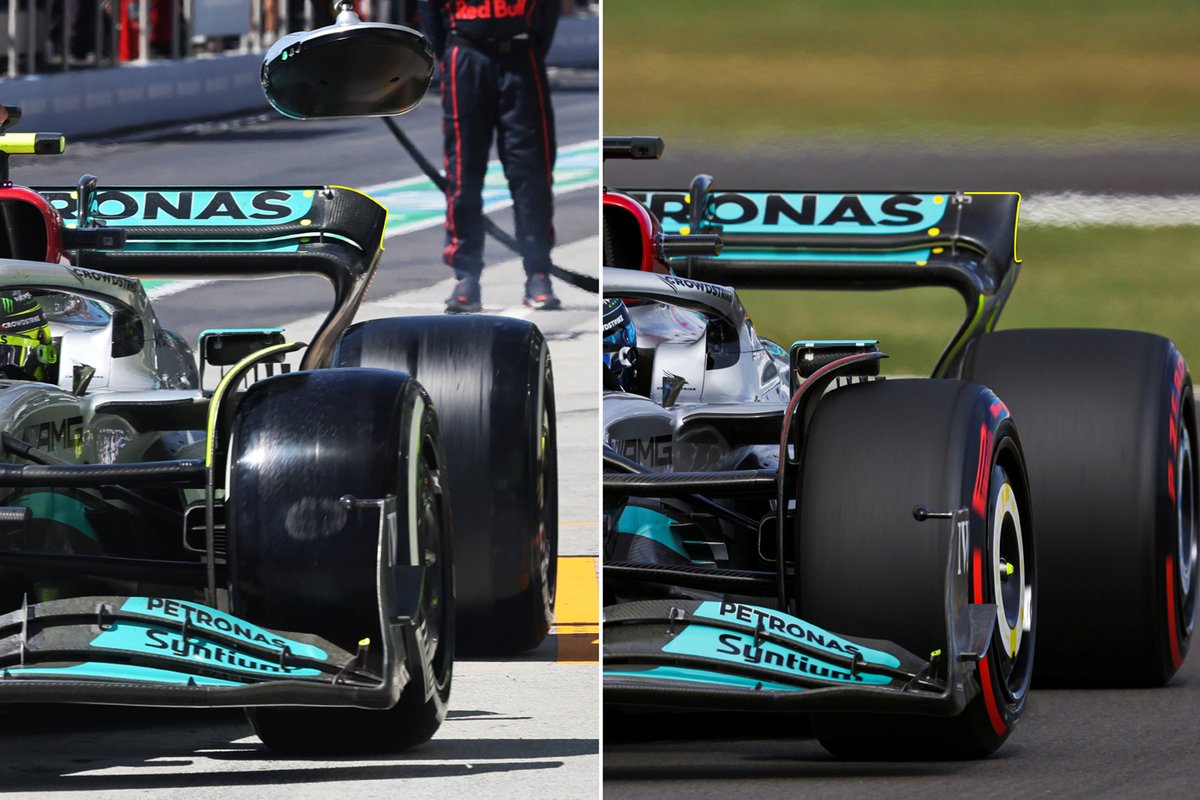