Max Verstappen’s British Grand Prix hopes were wrecked by a front wing endplate from Red Bull’s sister Formula 1 team AlphaTauri getting stuck under his floor and ruining his aerodynamics.

The world champion had just taken the lead from Ferrari's Carlos Sainz at Silverstone when he suddenly slowed with what he believed was a puncture.

However, after pitting for fresh tyres and finding his car was no better, Verstappen struggled on with a mysterious aero loss that the team suspected was caused by car damage. He eventually came home in seventh.

Television footage had shown him hitting a part from Charles Leclerc’s Ferrari early on in the race, and it was thought that it could have been related to that.

However, it was only after the grand prix that Red Bull discovered the problem had actually been caused by the endplate from an AlphaTauri front wing getting embedded underneath the Dutchman's RB18.

The part had been ripped off after AlphaTauri team-mates Yuki Tsunoda and Pierre Gasly collided on lap 11, wrecking their own squad’s hope of points.

Red Bull team boss Christian Horner, who showed reporters later on a photo of Verstappen in the post-race debrief holding the endplate, reckoned that the disruption to his car’s airflow was costing Verstappen about 20 percent of his peak downforce.

“We didn't have a puncture,” explained Horner, reflecting on Verstappen’s problem.

“He was reporting, because it was so bad, that it felt like a puncture. But basically on lap 11, he hit a piece of debris which was an AlphaTauri part from an incident that they had.

“So he's then done the race with a modified floor that had a piece of an AlphaTauri endplate stuck under the bottom of the car. It stayed in there and got stuck and wedged itself almost like a blockage.” 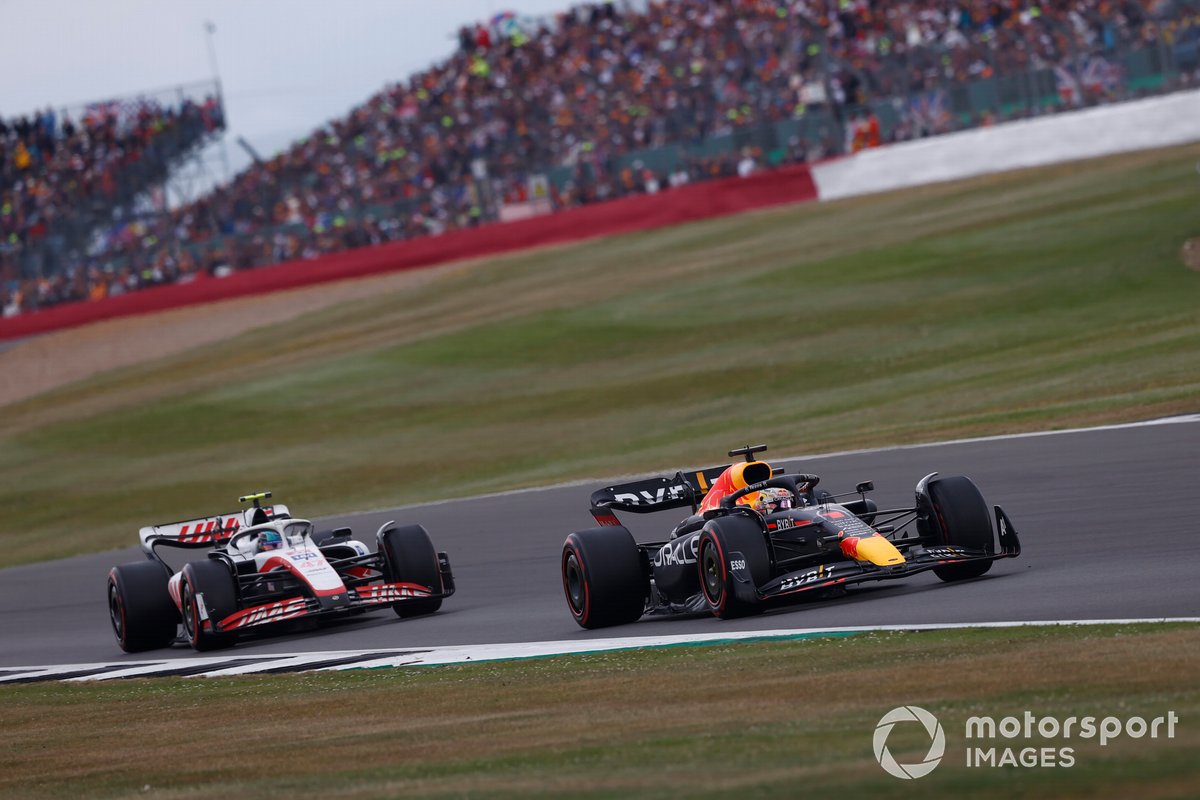 Verstappen explained that he did not know during the race what the problem was, but realised quite quickly afterwards how bad his car had been affected when he inspected it in parc ferme.

“When I jumped out of the car I had a look at the floor and underneath, on the left hand side, it is completely ruptured, everything is gone,” he said.

“Once I got into the lead and Carlos made a mistake, a few corners later in Turn 5, there was a piece a carbon.

“But, by the time I was there, I couldn’t move drastically left or right so I just tried to hit it head on. But instead it just went into my floor and it destroyed everything.

“It felt like a puncture because suddenly I had no balance and the car was hopping a lot. So we decided to box and even after that the car was just a handful to drive.”

Although Verstappen and the team did everything to try to better balance the car for the rest of the race, he admitted it was a struggle to look after the tyres.

“The tough bit was to find a nice aero balance because, of course, massive loss of mainly rear load to try and help the front wing.

“When you do that, you get overload so that wasn’t ideal on the hard tyre set. Then for the last set we went up again but it was very tough.

“But at the end of the day I think seventh place was a good result with the damage I had.”