Max Verstappen was surprised by his fast getaway at the start of Formula 1’s 2021 Emilia Romagna Grand Prix after Red Bull struggled to do so in wet conditions last year.

At the beginning of the 2020 Turkish Grand Prix in particular, Verstappen and then team-mate Alex Albon made shocking starts and dropped several places.

But at the start of last weekend’s race at Imola, the Dutchman was able to jump from third on the grid to take first on the run to the race’s opening corners – seizing the lead decisively in a clash with Lewis Hamilton at the Tamburello chicane.

Speaking the aftermath of his 11th F1 career win, Verstappen said: “It’s never easy a race like this; it’s quite stressful out there to make the right calls.

“The key, I think, was to have that good launch, which was also a bit of a surprise to me!

“After last year, where we always struggled in the wet, over the winter and the beginning of the year we definitely made some improvements with that and [last weekend] it was very good.” 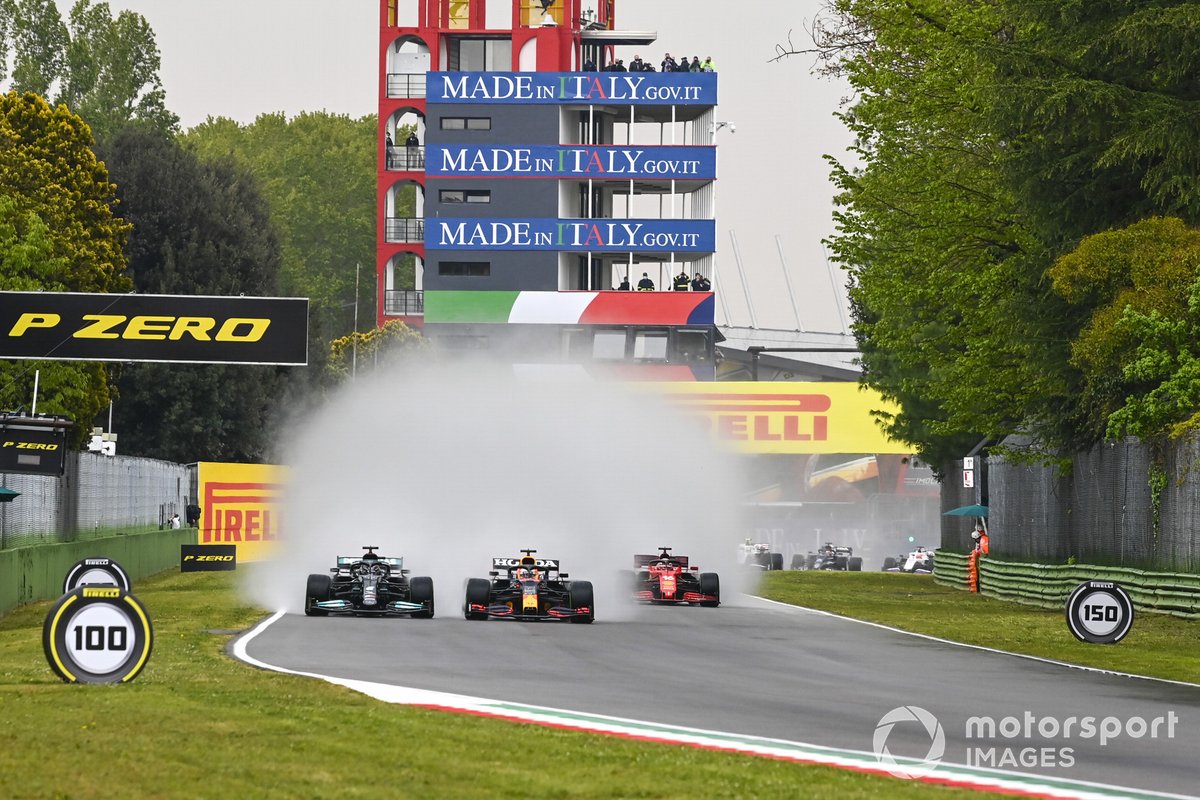 lh and Max Verstappen, Red Bull Racing RB16B battle at the start of the race

“Honda has done a great job over the winter,” he said.

“They've worked really hard and yeah all credit to them. I mean, their first victory at Imola since [Ayrton] Senna in 1991, so you know it's great for them to be getting this kind of result.

“And we couldn't honestly do it without their support. So yeah, really encouraging.”

Verstappen led the vast majority of Imola’s second F1 race in successive season since dropping off the calendar after 2006, despite proceedings being interrupted by a red flag period to clean up the wreckage of George Russell and Valtteri Bottas crashing heavily at Tamburello halfway through the event.

The closest he came to losing the lead – apart from during the intermediates-slicks pitstop phase where Hamilton led two laps after Verstappen came in – was when he briefly lost control of his car ahead of the rolling restart following the red flag.

“To make the right call from intermediate to slick tyres was not easy, because I saw a few guys ahead of me on slicks tyres, but they were struggling a lot,” said Verstappen, when explaining his race after the fast initial start.

“But even on the intermediates – they were finished [towards the end of the stint on the drying track], so to keep on going was difficult, a lot of sliding around.

“If you would go a few centimetres off line you could lose the car, so not easy out there. But once we put on the slicks all fine.

“Then of course we had the red flag, with so much debris into Turn 2, so basically the advantage was gone.

“And then I had my moment on the restart. That was a big one. Some secret tyre warming going on! But after that it was fine.”