Verstappen: Mateschitz news made for "tough entry" to US F1 qualifying

Max Verstappen said news that Dietrich Mateschitz had died made for a “tough entry” to Formula 1 qualifying in Austin before paying a heartfelt tribute to the Red Bull founder.

Shortly before the start of qualifying for the United States Grand Prix on Saturday, news emerged that Mateschitz had passed away at the age of 78 following a long battle with illness.

Mateschitz led the Red Bull brand into F1 as a sponsor before going on to acquire two teams, as well as playing an instrumental role in the development of many young drivers including Verstappen.

Red Bull opted to give Verstappen a race seat at the age of just 17 in 2015, paving the way for him to becoming the series’ youngest winner and a two-time world champion.

Verstappen qualified third on Saturday at the Circuit of The Americas, finishing 0.092 seconds behind polesitter Carlos Sainz of Ferrari.

Verstappen said the news made for “a tough entry to qualifying” for everyone at Red Bull and that the result “doesn’t matter” in the context.

“We’re more about what happened today, and also what he has meant to everyone within the team, and what he has built up in Formula 1, the company itself Red Bull, and personally to me,” said Verstappen.

“Because without him, I wouldn’t be sitting here today, and I wouldn’t have had the success I’ve had. It’s incredibly tough for everyone in the team.

“Luckily, I got to see him a couple of weeks back, so we could spend a little bit of time together. It’s still a tough day.” 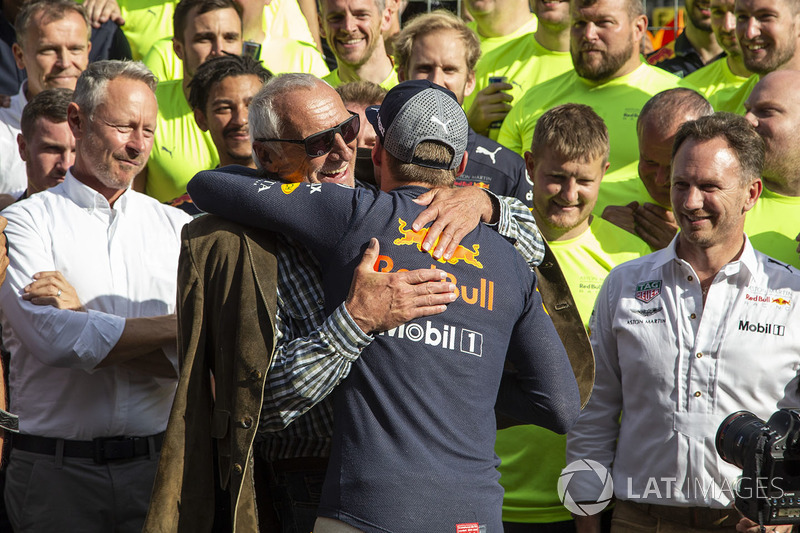 Verstappen said after jumping out of the car at COTA that Red Bull was “going to try and make him proud tomorrow”.

The team will clinch its fifth F1 constructors’ title on Sunday so long as it is not outscored by Ferrari by more than 19 points.

Discussing his session, Verstappen said he found the lap “very tricky” given the windy conditions through the first sector, as well as struggling to get his tyres in the right temperature window.

“I think at the end of the day, we were competitive on both strategies what we tried, and just in my first lap in Q3, I lost like three-tenths in the first corner, just hitting a few bumps and losing the rear

“It was just really tricky out there. And then the second run was good in sector one, sector two we looked very strong, and then I ran out of tyres a little bit in the last sector with big oversteer in the second to last corner.

“But all in all, we were still very close to pole. At the last race it was the other way around, I was on pole but it was all fine margins. Now when you don’t get it entirely together, you are P3, but at the same distance between the three cars.

“I think still, it’s a good result. We know that we have a quick race car. I think anyway tomorrow, we should be strong.”

Verstappen will move up to second place on the grid tomorrow as a result of Charles Leclerc’s penalty. Sainz said he thought Verstappen remained the favourite for the race given Red Bull’s recent strength on the long runs, and that he was “realistic” about his chances of converting pole into the win.

“It doesn’t matter if you are favourite or not,” said Verstappen. “I’m just going to have fun out there.”