Max Verstappen has offered himself up for some wet weather Formula 1 tyre testing if it would help Pirelli come up with better products for the rain.

The delays in getting the Japanese Grand Prix going on Sunday has reopened the debate about whether or not F1 needs a rethink about cars being better able to cope with poor weather conditions.

The most critical aspect in terms of wet weather safety is in ensuring that tyres can cope with excess water on track, and that there is no risk of aquaplaning.

But there is also the need to ensure that the range of wet weather rubber works, with Pirelli's current intermediate tyre performing much better over a wider range of track conditions compared to the extreme.

Speaking after the rain-hit Suzuka event, Verstappen said he would be more than happy to work with Pirelli to try out some new ideas to help improve things.

“I didn't want to take a dig out of everyone but I think we need better rain tyres,” said the Dutchman. “If you saw what we could do in the ‘90s or the early 2000s, with the amount of water on the track.

“I'm very happy to have a few test days and try all different kinds of tyres. But we need better rain tyres because I think the extremes are just slow and they can't really carry a lot of water away.

“That's why everyone always tries to switch very quickly to an intermediate because it's just so much faster per lap.

“You could see from one to the other lap, we went from the extreme to the inter today and we immediately went five seconds at least faster and that is just too big. And that's why nobody really wants to run that extreme.”

The performance contrast between the intermediate and the extreme wet prompted all drivers to take the original Japanese GP start on the inters before it was swiftly red flagged. 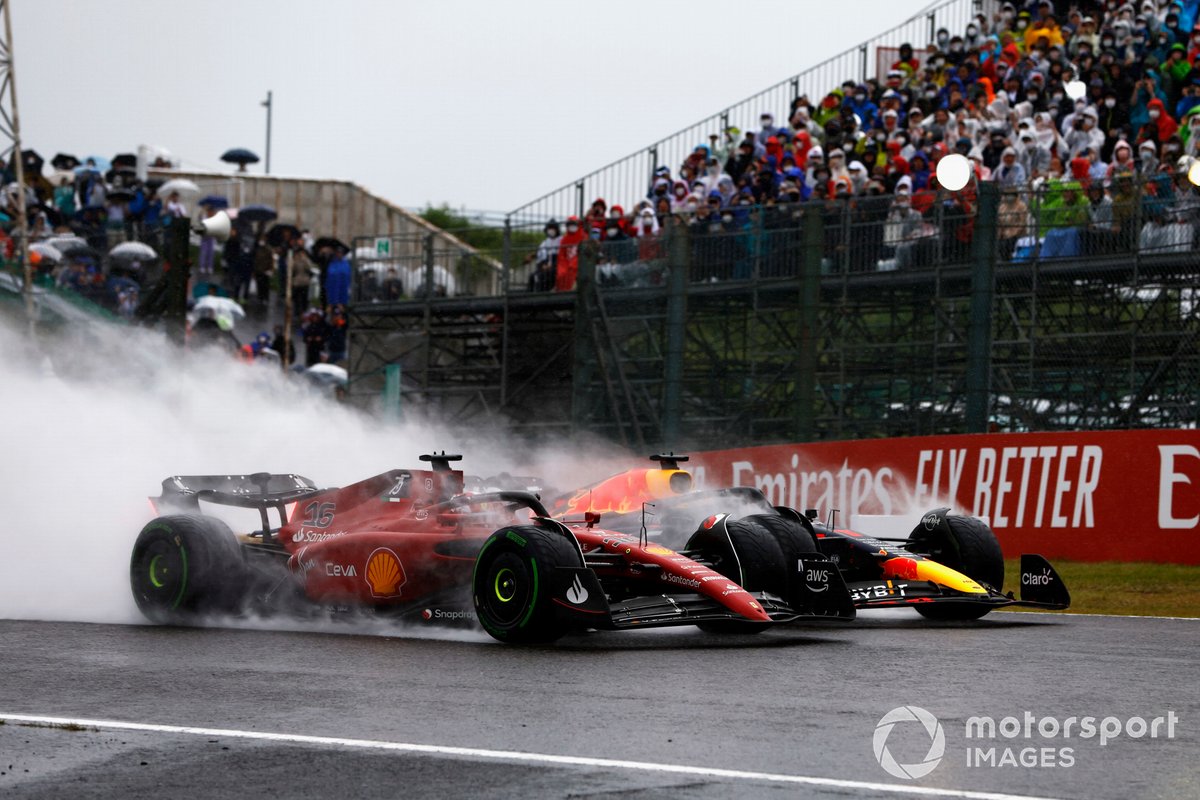 All drivers started on intermediates before the race was red flagged

While Verstappen thinks even the current extremes may not have been able to cope with the worst of the Japanese weather, he thinks tyres in the past were better at doing so.

“When it rained like it did when the red flag came out, and you would have put extreme tyres on, I think it would still be really difficult to drive,” he said.

“But then if you compare that to 20 years ago, that would have been perfectly fine. So there must be a solution.

“But this is not criticism because I'm very happy to help out. We should look into it.

“Maybe we can just organise more tests days in the wet and work together, to try and find better tyres to at least have an opportunity to really drive in the wet and not always only drive like two laps on an extreme, switch to intermediate and call it a wet race because a wet race is also normally driven with heavy rain.”

Ferrari’s Charles Leclerc believed one important aspect that needs looking at is the amount of water thrown up by the current tyres, as that makes it hard for drivers to see through the spray.

“I think a big problem of these cars is just the visibility,” he said.

“So whatever we can do to try and improve the visibility and minimise the spray, especially behind the cars, this will be hugely beneficial.

“I believe that sometimes we can actually run for the conditions of the track but just because of the visibility, because it's so dangerous being behind and you don't see anything, that we end up not running at all.

“We should try and find a solution, for some reason, to try and minimise the spray.”

How did Verstappen win the title? F1’s points confusion explained