Max Verstappen has blasted Formula 1 as being "more about penalties than about racing" after a controversial Saudi Arabian Grand Prix blighted by multiple incidents with title rival Lewis Hamilton.

The Red Bull driver finished second on-the-road to Hamilton in an ill-tempered race at the Jeddah street circuit that was twice red-flagged, with a five-second penalty added to his race time for gaining an advantage by driving off the track.

He has also been summoned by the stewards for an alleged breach of the FIA International Sporting Code for an incident with Hamilton at Turn 27 when the Mercedes driver alleged that Verstappen brake-tested him.

Verstappen had been ordered by his team to let Hamilton through, having run wide at Turn 1 to repel Hamilton's DRS-assisted move, when he slowed suddenly on the back straight heading into the final corner and Hamilton ran into the back of him.

Having stayed in front of Hamilton after this contact, he then heeded the order to let the Mercedes by into the final corner before immediately diving up his inside again.

The Dutchman was then given a five-second penalty, and as his medium tyres began to wear, was overtaken by Hamilton's hard-shod machine.

Verstappen had earlier been told to give up positions to Esteban Ocon and Hamilton for the second restart, following a pileup induced by Sergio Perez's mid-pack spin, after driving over the Turn 1 run-off to stay ahead of Hamilton.

Verstappen was awarded the driver of the day, and in an interview immediately after crossing the line, he vented his displeasure at how the race unfolded.

"Luckily the fans have a clear mind about racing because what happened today is unbelievable," he said.

"I'm just trying to race and this sport these days is more about penalties than about racing.

"For me this is not Formula 1 but at least the fans enjoyed it.

"I gave it all today but clearly not quick enough. But still, happy with second." 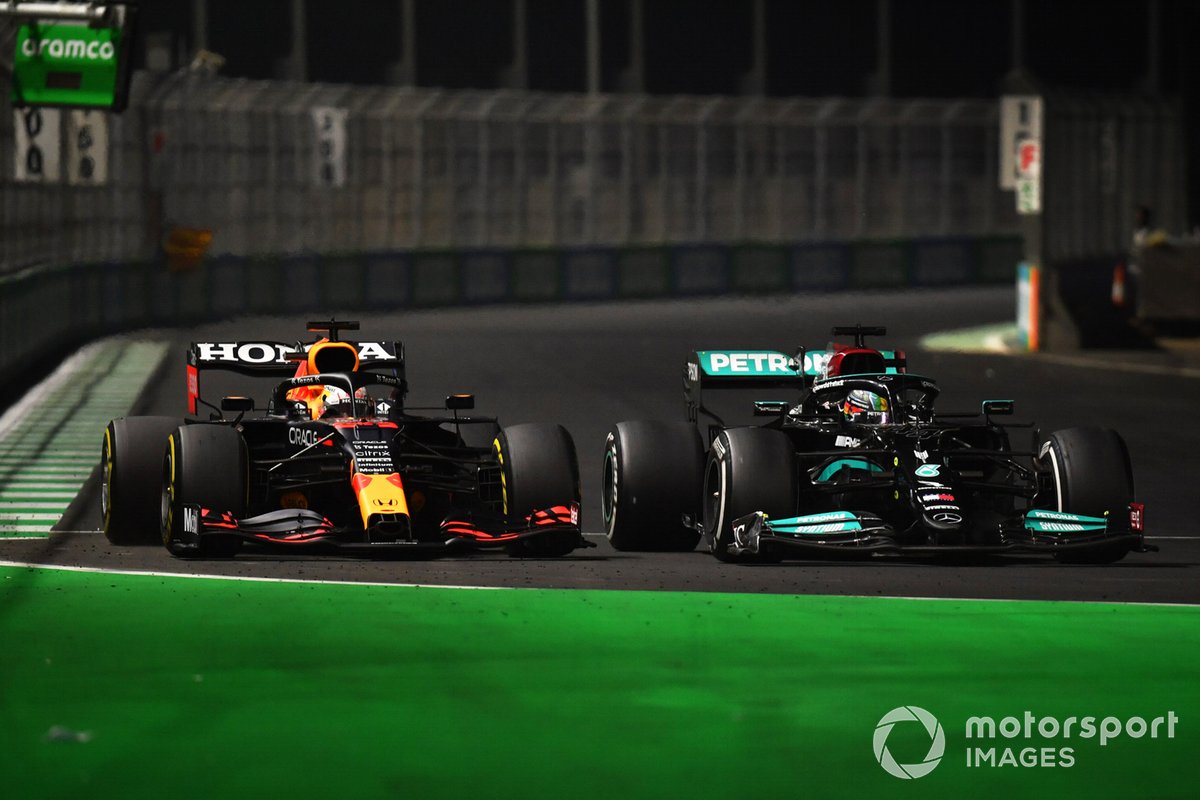 Speaking to the media after the race, Verstappen reiterated that he didn't agree with the decisions made by race control.

"A lot of things happened, which I don't fully agree with, but it is what it is," he said. "I mean, at least I tried it on track, you know, to give it all."

Asked directly about the clash with Hamilton, for which he has been summoned to the stewards, Verstappen said: "I slowed down.

"I wanted to let him by, so I'm on the right but he didn't want to overtake and then we touched.

"I don't really understand what happened there."

Verstappen and Hamilton are currently tied on 369.5 points heading to next weekend's Abu Dhabi championship decider, with the Red Bull driver ahead on countback.