Max Verstappen did not know if his brakes would work after the start of Formula 1's sprint race at the British Grand Prix having suffered a fire on the grid.

The Dutchman's front brakes were spotted smoking as he formed up on the front row of the grid at Silverstone for F1's first sprint qualifying event.

But with the cars at the grid coming into position quite slowly, Verstappen's situation escalated and his front tyres were briefly engulfed in flames.

Although he ignored the problem to deliver a brilliant getaway that secured him the race lead, he admitted to not being sure the brakes would be okay when he first needed them.

"Yeah, I was really worried about that," said Verstappen, who went on to win the race and claim pole for the British GP.

"A little bit of fire, it's okay, but it was becoming quite big and I was just looking at my mirror to the cars at the back and hoping they would speed up.

"So then, of course, I was not sure going into Turn 3 if my brakes were going to work. But luckily I didn't do too much damage.

"I think I saw a few people in the grandstand making pictures when the brakes were on fire, so for sure they got a good few shots there."

Although Hamilton pushed him hard on the opening lap of the sprint race, Verstappen was never really threatened after that as the title protagonists pulled clear of third placed Valtteri Bottas.

But despite his pace advantage, Verstappen is mindful that Red Bull is lacking in straightline speed this weekend – having locked itself in to a higher downforce setting after Friday practice. 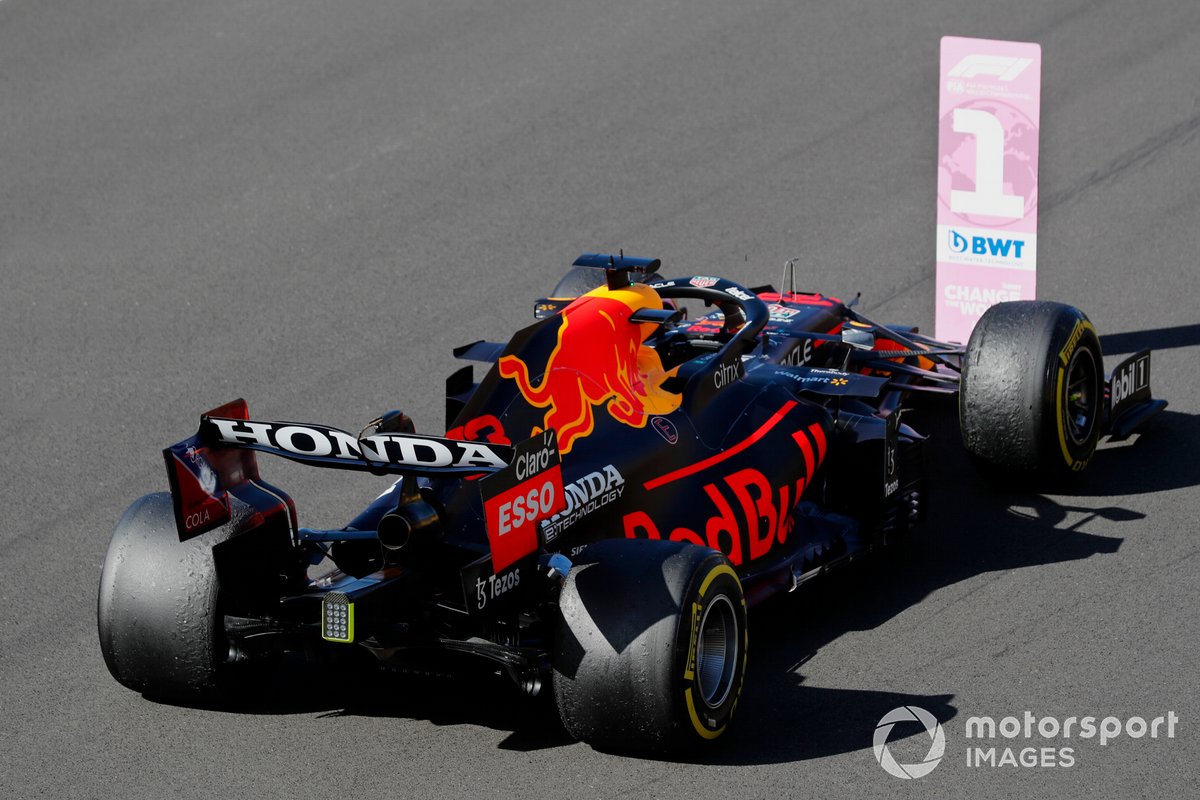 "It seems like we are quite quick through corners, and they are quick on the straight this weekend," he said.

"After only one free practice session, if you're not allowed to make any changes, and you don't hit it right. I think then you get stuck. So we are a bit stuck on the straight.

"That's why we have to make up our time in the corners. But in this more or less flat out race, because you cannot really call it flat out but at least pushing more, the pace was alright.

"But I still expect with a pitstop coming into play [on Sunday], two pitstops who knows it's again going to be a good fight."

Verstappen does not like the way that F1's parc ferme rules have forced teams to commit to their setups after just one practice session.

"I think we have to look at the schedule because to do an FP2 session, when you're not allowed to change the car, is a bit wrong in my opinion," he said.

"It's a bit of luck sometimes now, if we keep this format going for sprint races, that you only have one free practice to nail the setup.

"But of course we always have to look at ourselves, you know, to make sure that we can do better, but if I could do it again yeah for sure I would choose a bit more top speed."