Mercedes driver Bottas had claimed his third pole position of the season, and his first front-row start in 10 races, at Interlagos but was passed by Vettel into the Senna S on the opening lap.

Though Bottas came close to retaking the lead after stopping one lap earlier than the Ferrari, Vettel rejoined ahead and kept Bottas at arm's length for the rest of the grand prix.

Having not won since July's Austrian GP, the last race he started from pole, Bottas said it was "unfortunate" but "obvious" that he "lost the race" at the start.

"For me the issue was the initial wheelspin," he explained.

"As soon as I started to release the clutch I broke the traction.

"I had wheelspin and a poor getaway, I was trying to cover the inside, but looking in mirror I couldn't see Seb anywhere.

"I was guessing he would come inside, and he did."

Bottas was adamant he had the pace to keep Vettel behind him had he held the lead into the first corner.

"Our pace and our car was pretty similar today, there was not much pace difference," he said.

"Being first out of Turn 1 would have been quite a different race, but if and if..."

He conceded he now needs "some miracles" to snatch second in the championship having fallen 22 points behind Vettel with just the Abu Dhabi race remaining. 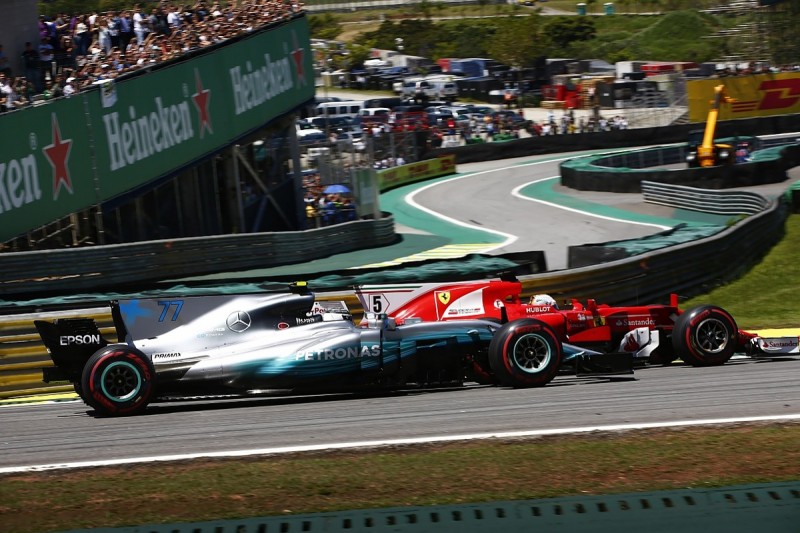 Vettel agreed it was crucial to make the pass at the start because Ferrari and Mercedes had "more or less the same pace" for the entire race.

He said he thought he had thrown away his chance to take the lead at the first corner.

"Initially I had a very good launch and thought 'I've got this', then maybe I was a bit too greedy, spinning up the wheels a little bit and losing some momentum on Valtteri," he said.

"Then I looked over and saw he was still struggling, and gained a bit on the second phase to get me momentum into first corner.

Vettel and Bottas circulated a couple of seconds apart throughout and the race winner claimed he was "pretty much flat out all the time" to stay ahead.

"We had less straightline speed than Mercedes this weekend," Vettel added.

"It was tough seeing him in my mirrors close, especially in the first and third sectors, so I had to nail the second sector each time."