The road-going version of the Aston Martin/Red Bull Advanced Technologies-developed Valkyrie, which will be built for the new World Endurance Championship rules as well, complete a demonstration lap of Silverstone on Saturday.

Aston's 1160bhp machine appeared in a livery inspired by the red camouflage design Red Bull shook down its 2019 Formula 1 car in at Silverstone earlier this year.

The company's CEO Andy Palmer told Autosport there were a "whole bunch of things at play" that led to the Valkyrie being run for the first time on the British GP weekend, in front of a sell-out crowd.

"First of all it's the ride-and-handling home of Aston Martin because our Stowe facility is just there," Palmer said.

"Second it's the home grand prix of the Aston Martin Red Bull team, and very close to the Red Bull home. That was important.

"There's a whole load of British fans there.

"And since we listed, there's a whole bunch of people who are shorting our shares on the premise or thesis that we can't make the DBX and Valkyrie work.

"To some extent it was a bit of two fingers to those guys, to demonstrate publicly that it not only works but it's bloody great as well." 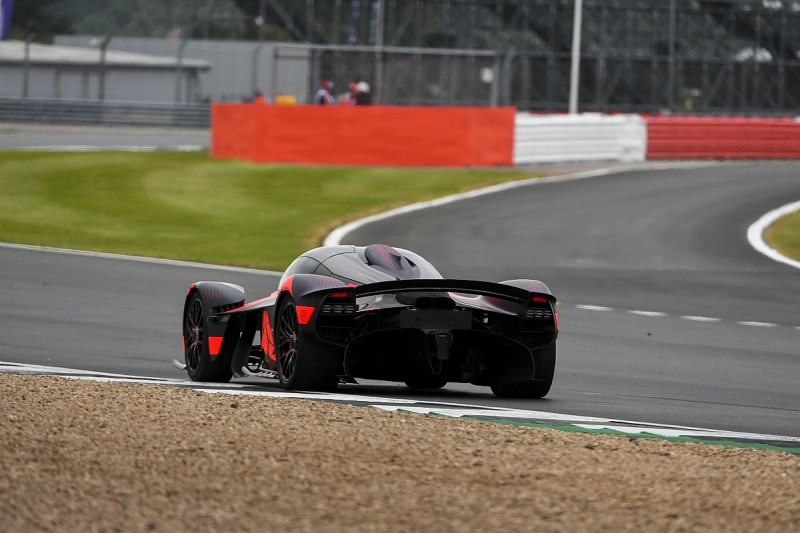 A coolant leak on Thursday night meant the team "only got the car reliably running on the Friday", said Palmer, who admitted he briefly thought the run would not happen.

He credited the Red Bull and Aston Martin teams for being able to get the car ready.

"Sitting on the apron, when the guys [say], 'It's ready to go, do we go?' - that lap was a long lap from my perspective," Palmer said. "But the car performed perfectly.

"From an achievement perspective, that's a car that is nigh-on impossible to achieve, and plenty of people have told us it's impossible.

"So to get it there is a huge milestone."

The team originally responsible for the concept engineering of the car will assist with the initial develop of the WEC version of the car.

At the same time, "a fairly significant build" will now begin for multiple road-going cars that will undergo various tests.

"Some go on to be crashed, some go onto rigs for long-term durability testing, some go off for calibration," said Palmer.

"They all go into various test modes to make sure we meet the test standards of Red Bull for a Formula 1 car, but also meet all of our standards for a road car.

"It's quite an arduous schedule now."

The Valkyrie may reappear on track to give a public "validation" of its performance.

"What you saw at the weekend it wasn't going flat out," said Palmer. "I'd like to see it unleashed.

"And then the biggie [milestone] is the first production car at the end of this year."