Despite a middling start to the 2018 Formula 1 season, Red Bull heads to the Monaco Grand Prix as one of the favourites for victory this weekend

That is partly because its Renault power deficit is unlikely to hurt as much on the twisty Monte Carlo street circuit, but also because of chassis progress made in a major revamp for the last race at Barcelona. 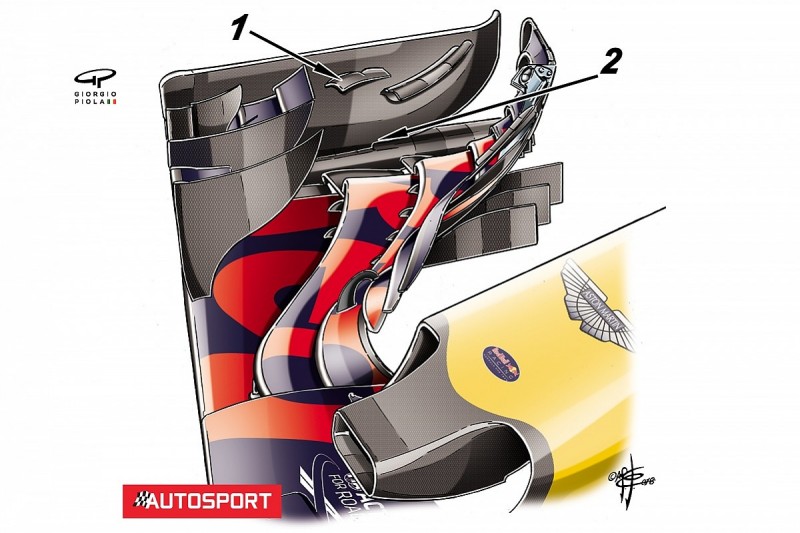 Among a raft of updates for the Spanish GP, Red Bull added a small canard to the inside of its front wing endplate (1). This is very similar to the one utilised by Ferrari since late-2017.

The canard, which like Ferrari's design features a slot in its centre, will pick up the airflow coming off the trailing edge of the wing section just in front of it and stop some of it spilling over the top of the front wing endplate.

The opening (2) is to allow the airflow to be forced out as low as possible in what everyone is now calling 'outwash end plates'.

Aiming low here is important because if the airflow tries to go over the top of the front tyre it creates lift on the tyre surface and reduces the forces on the tyre contact patch. 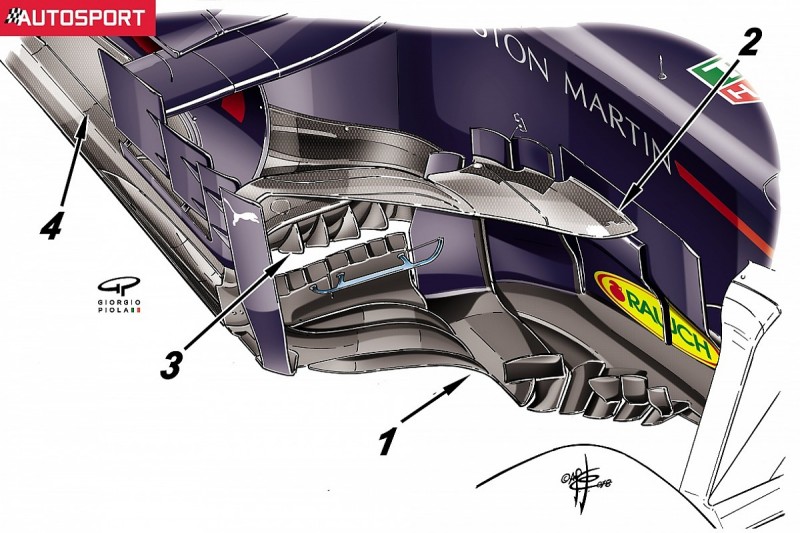 Last year, the rules were opened up in the bargeboard area to allow teams to design more sophisticated aerodynamic packages.

As this Red Bull example shows, with the multitude of turning vanes, both vertical, and horizontal, all finely placed for maximum performance, it is no wonder current F1 cars struggle so much in turbulent airflow or windy conditions.

Developing all these components to work hand-in-hand is difficult enough in just straight-ahead airflow, so turbulence or crosswinds are a real challenge.

Just take Daniel Ricciardo's off in Spanish GP Friday practice - it is likely that these components and their drop-off contributed to it.

Red Bull's main bargeboard has been heavily revised, with a new slot dividing the first element (denoted by the separation of the Rauch logo), while the secondary vertical element is now split into two. The black forward facing element now features a comb-like array of slots in its upper edge.

The lower footplate section (1) is used like a leading edge slat to help prepare the airflow that is going to the leading edge of the floor.

It also legalises the chassis boomerang (2), which is a delta-shaped wing section that comes out from the side of the chassis. This picks up the airflow coming off the trailing edge of the front wing and redirects it toward the sidepod.

This varies in angle of attack as it comes out from the chassis to optimise the airflow in each area.

While the almost imperceptible slots in its surface may seem odd, they mirror the slots created in the floor section below for legality reasons. Its outer end mounts to the forward vertical tyre wake control deflector, improving the entire structure's rigidity.

On the leading edge of the floor where previously the designers sited four strakes, there are now six strakes (3). Each of these sets up vortices that will travel under the flat section of the underfloor, energising this airflow.

The upward curvature of the floor has also been revised, which in tandem with additional strakes will help to reduce the risk of airflow separation as the car changes direction.

On the floor's outer edge, Red Bull has a fully enclosed longitudinal hole (4), similar to that pioneered by McLaren.

This helps to seal the underfloor from the effect of any turbulent flow that would ordinarily be pulled under the floor in this area. 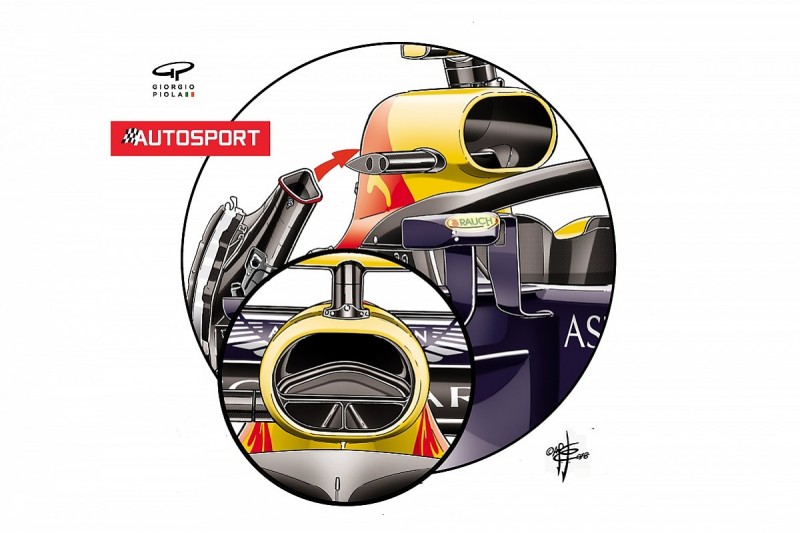 Keen to improve engine cooling efficiency, so it can run it harder for longer, Red Bull made alterations to the RB14's airbox and the layout of some of its ancillaries in Spain.

The changes required the team to repass the necessary load tests, given it's part of the roll over structure. The tweaks also resulted in the pipework running from the inlet to the various heat exchangers being revamped.

With so many different components to cool on modern F1 power units, teams struggle to find the best positions for cooling inlets.

Red Bull, like most teams, uses the airbox intake for this. With the engine being turbocharged, it will always be able to take the airflow it requires, so the airbox inlet is not as critical to performance as with normally aspirated engines.

Red Bull is one of only a handful of teams that has opted, at least at this stage, to streamline the halo with its fairing allowance, rather than fit winglets or vortex generating devices to it.

As such, it's highly possible that its calculations about how the airflow spilt from the safety device interacts with the airbox downstream may have been slightly awry and this change is partly a reaction to that. 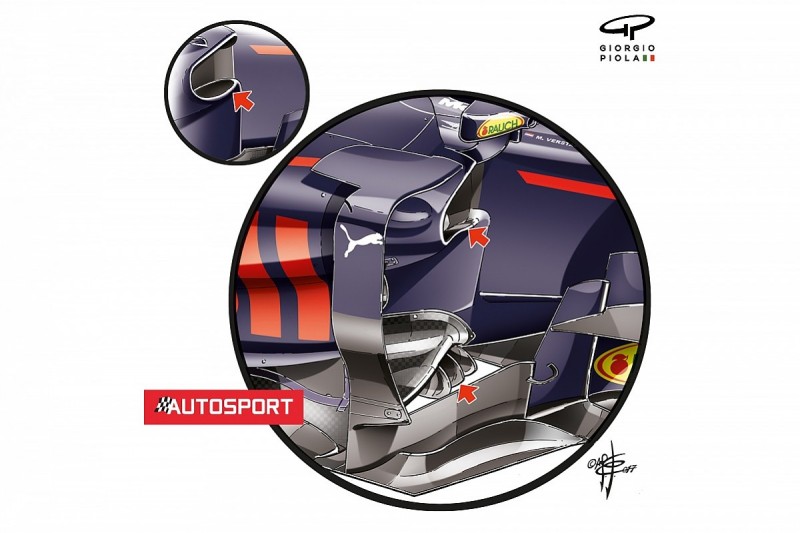 It will be extremely interesting to see how Red Bull's pace compares with its rivals in the coming races, especially when we consider that the RB14's development trajectory is ahead of the curve compared with 2017.

The team really began to unlock the potential of the RB13 just before the summer break last year, when it introduced a similar floor, sidepod and bargeboard overhaul in Hungary.