Formula 1 made its long-awaited return to Mexico last weekend after a year away with a fiesta atmosphere in the grandstands, but the fight for victory was one-sided.

It may have been a far cry from the strategic thriller of Austin or the late-rain chaos in Russia, but the Mexico City Grand Prix was nevertheless another chapter in the story of this year’s championship fight.

Max Verstappen took another step towards his first F1 crown with a crushing win against Lewis Hamilton, delivering one of his most dominant drives of the season as he crossed the line 16 seconds clear of the field.

It was an important response from Red Bull after Mercedes had surprisingly locked out the front row of the grid in qualifying, but how did Verstappen win by such a big margin?

Red Bull entered the weekend as the favourite for victory because of how it has performed at high downforce tracks this season. The Autodromo Hermanos Rodriguez may not look like a layout where grip would be important, but at more than 2,000 metres of altitude, the thin air means the set-up requirements are similar to Monaco or Hungary.

Mercedes hasn’t been able to match Red Bull when it comes to high downforce set-ups this season, meaning it always looked set to struggle in the race.

Toto Wolff noted afterwards that even if Verstappen hadn’t passed both of his cars for the lead at Turn 1, the Red Bull would have “driven circles” around Mercedes because its pace advantage was so big.

But that Turn 1 moment was also critical for Verstappen’s win. It stunned many of those in the paddock just how late Verstappen was able to get on the brakes before swinging his Red Bull into the corner to grab the lead away - so much so that Red Bull boss Christian Horner thought Verstappen had missed his braking point.

It was something Verstappen had practiced on his laps to the grid, pulling as far to the left as possible to use the added grip on the racing line. When Valtteri Bottas failed to block him off and left room for them to go three-wide into Turn 1, Verstappen knew exactly where to aim for.

He admitted afterwards that he was “really on the edge” with the late braking move, but got it done to the delight of the Red Bull garage. It is surely one of the moves of the season. 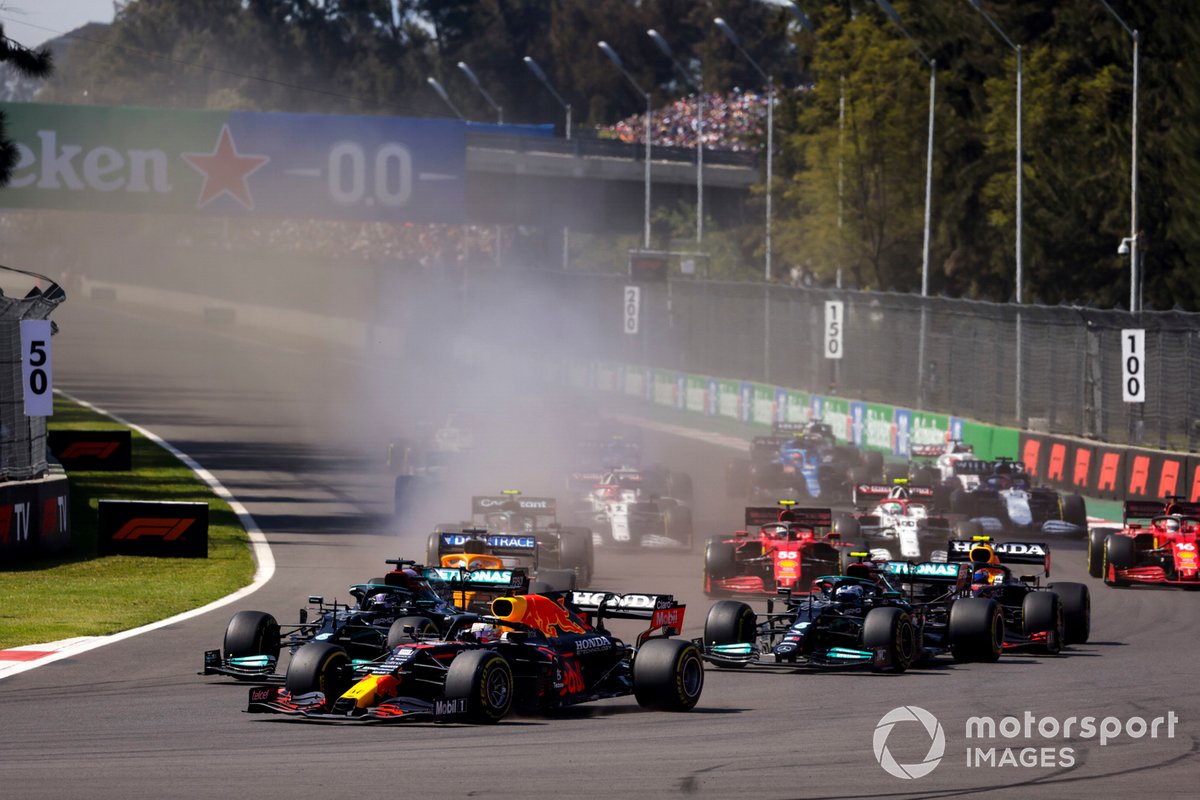 With the lead secured, Verstappen was able to check out and comfortably put a big gap between himself and Hamilton behind, meaning he never looked at risk of losing the race as he managed his pace and tyres perfectly.

With all of the top 10 starting on mediums, it was a straightforward one-stop race. But Hamilton appeared to struggle more with tyre wear than the Red Bulls due to the warmer conditions on race day.

With home favourite Sergio Perez lurking less than two seconds behind, Hamilton knew he had to pit soon or risk being undercut. Hamilton came in for a set of hards on lap 29, but looked at risk of losing the place to Perez when he emerged behind Charles Leclerc and lost time on his outlap.

But Red Bull opted against responding immediately, instead keeping Perez out to create a tyre delta. Once Verstappen pitted on lap 33, it also gave Perez the honour of becoming the first Mexican driver to lead his home race in Formula 1.

Perez eventually pitted on lap 40, coming back out nine seconds behind Hamilton, but the tyre advantage meant Perez quickly caught up, closing to within one second to gain DRS entering the final stages of the race.

But the same factors that played to Red Bull’s strengths in Mexico also make it so hard to follow other cars closely without overheating the car, because of the thin air. It meant that no matter how much Perez tried, he simply couldn’t get close enough to Hamilton to try and overtake, meaning the Mercedes driver held on for second place.

A long way up the road though, Verstappen had no such issues. He was even able to engage in some gamesmanship to try and stop Bottas taking the fastest lap away, without compromising his lead, ending the race with an advantage of 16 seconds.

He is now 19 points clear in the championship, meaning Verstappen has all of the momentum as we head into the final four races of the 2021 season.