In a new series for Autosport, we take a look at the moments and calls pivotal to deciding each grand prix, and find out what was the winning formula.

It ended in heartbreak for Lando Norris, who was just a few laps away from his maiden grand prix victory before a decision to stay out on slicks backfired, leaving the McLaren driver feeling devastated.

Sochi was always going to be a big opportunity for Hamilton and Mercedes in the title race. Red Bull opted to change Max Verstappen’s power unit after losing an engine in the Silverstone crash, meaning the Dutch driver would start at the back of the grid.

But Hamilton’s hopes of maximising the chance on offer were compromised by a messy qualifying session. Two mistakes and some unfortunate timing meant he couldn’t set a time on slicks, leaving him fourth on the grid as Norris took his first F1 pole.

Norris feared he would be a sitting duck on the long run to Turn 2 thanks to the powerful slipstream, and he did lose the lead as his former McLaren team-mate, Carlos Sainz Jr, moved ahead. But Hamilton also ended up going backwards after getting boxed in at Turn 2, leaving him as low as seventh on the first lap.

Sainz and Norris were able to pull clear of the pack through the opening stint. Tyre graining caused Sainz’s times to drop off, allowing Norris to pass him for the lead on lap 13. 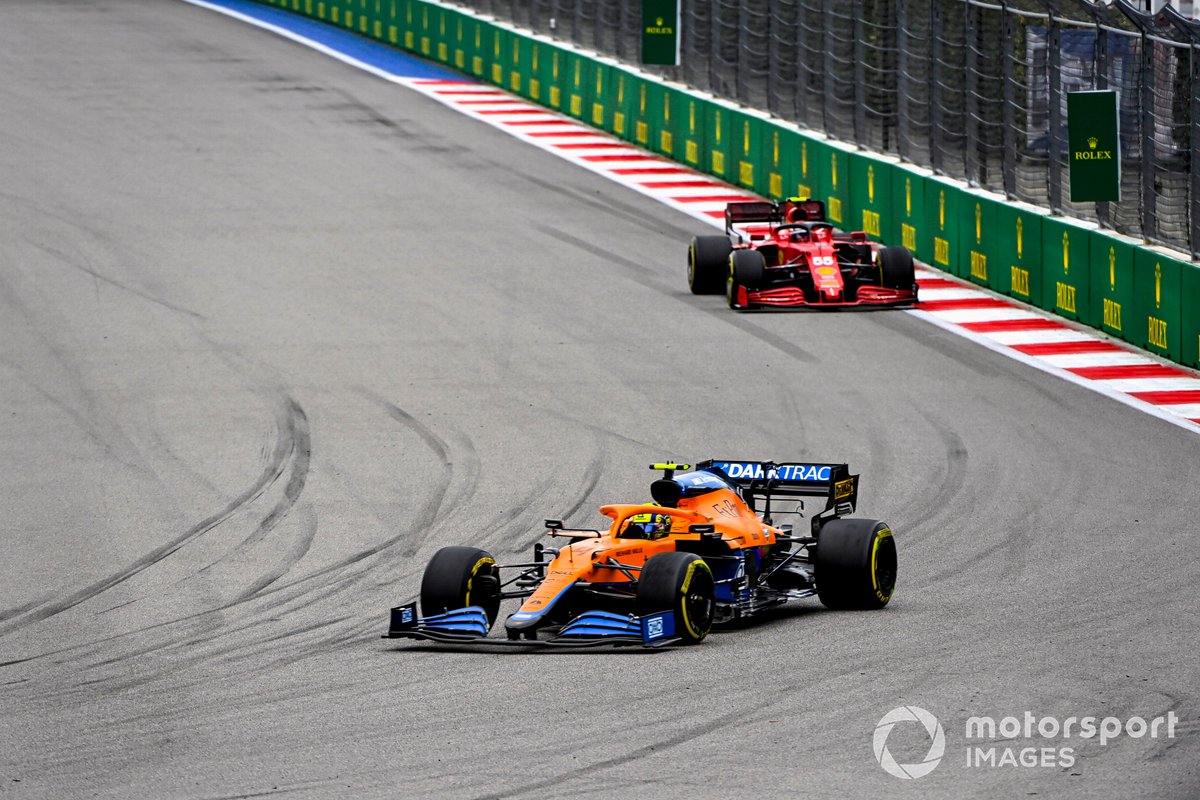 Norris had no such problems managing his medium tyres, stretching his stint all the way to lap 28 - two laps longer than Hamilton, who had fallen almost 14 seconds behind the McLaren after getting stuck behind Daniel Ricciardo.

But once Hamilton had clean air and a fresh set of hard tyres following his stop, and after quickly passing Lance Stroll, Sainz and Pierre Gasly, he was able to carve into Norris’s advantage, setting fastest lap after fastest lap.

A gap of eight seconds on lap 30 had been reduced to less than two seconds by lap 40, forcing Norris to dig deep and start to respond to Hamilton’s pace by posting some fastest laps of his own. The gap continued to fall though, leaving Hamilton almost within DRS range of Norris entering the final 10 laps.

And then, after a race of radio messages and eyes on the sky, the rain finally arrived. The fans were first to react, digging out their umbrellas and raincoats in the grandstands, and it left the drivers facing a critical call: do we pit for intermediates, or stay out on dry tyres?

Rain initially hit the track around Turn 5, but was not heavy enough to make it immediately wet enough for intermediates despite some slippery moments. Norris and Hamilton both said they wanted to continue on slicks for the time being, with Norris making his thoughts very clear to engineer Will Joseph on the radio. 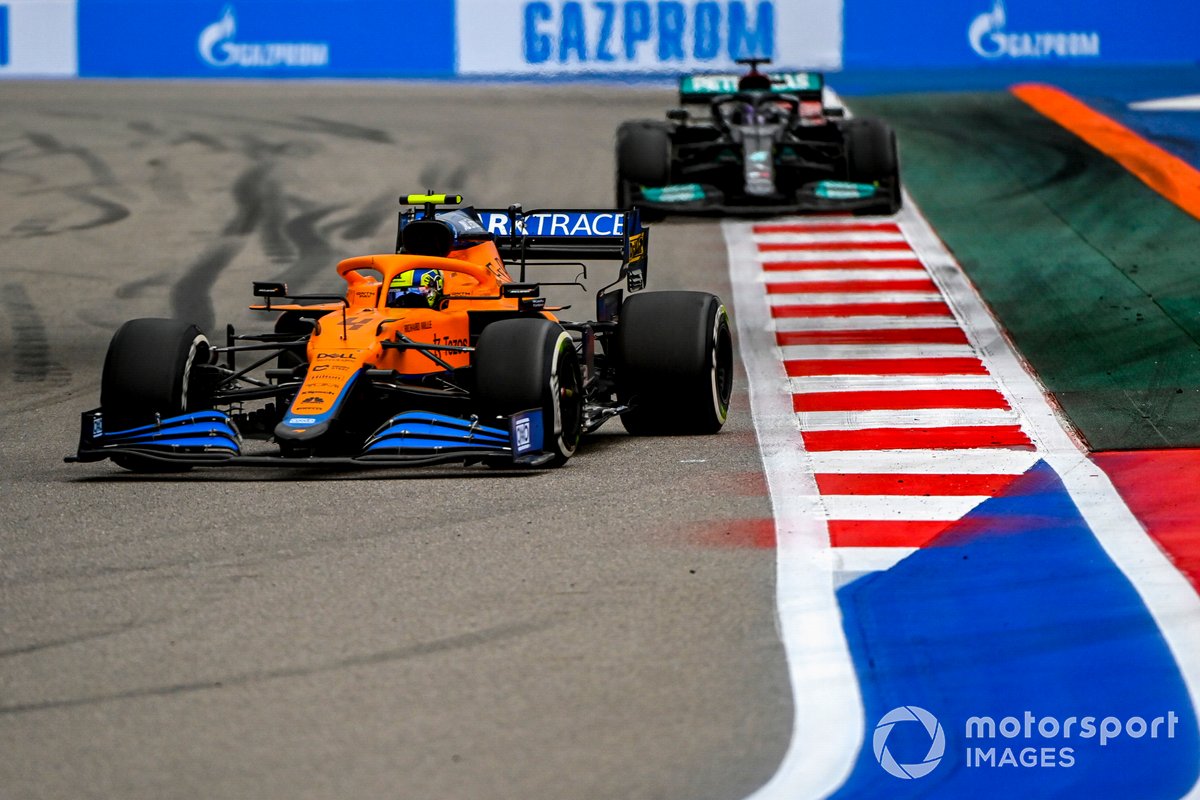 A couple of minutes later though, the rain was growing heavier - and more was coming on the radar. On lap 48, Hamilton was told to pit by his engineer, Pete Bonnington. But he ignored the call, carrying on for another lap as he closed right up on Norris.

Aware that conditions would only worsen, Mercedes jumped back on the radio to Hamilton, adamant that it was the right decision to pit. On lap 49, he finally came into the pits for a set of intermediates. Norris was now left all alone at the front, tip-toeing around the damp track after committing to staying out.

Sadly for Norris, it was the wrong decision. On lap 51, Norris spun off the track and was left struggling to keep his car in a straight line. He eventually hauled his car into the pits, cutting the white line at pit entry and landing a reprimand in the process, in a lap that was timed at more than three minutes.

By the time Norris was back out, he had fallen all the way to eighth place. He managed to regain a position by passing Kimi Raikkonen late on, but seventh was far less than he deserved.

McLaren team boss Andreas Seidl conceded after the race that the team could perhaps have been firmer with Norris to get him to pit, and will review what happened. You can be sure that Norris will learn from the experience and come back stronger for when he does finally win his first grand prix.

For Hamilton though, the timing had been just right. He was able to cross the line over 50 seconds clear of the field, making it the biggest winning margin in a grand prix since his win at Silverstone in 2008 - even if the gap to the rest of the pack did not tell the full story of a race. 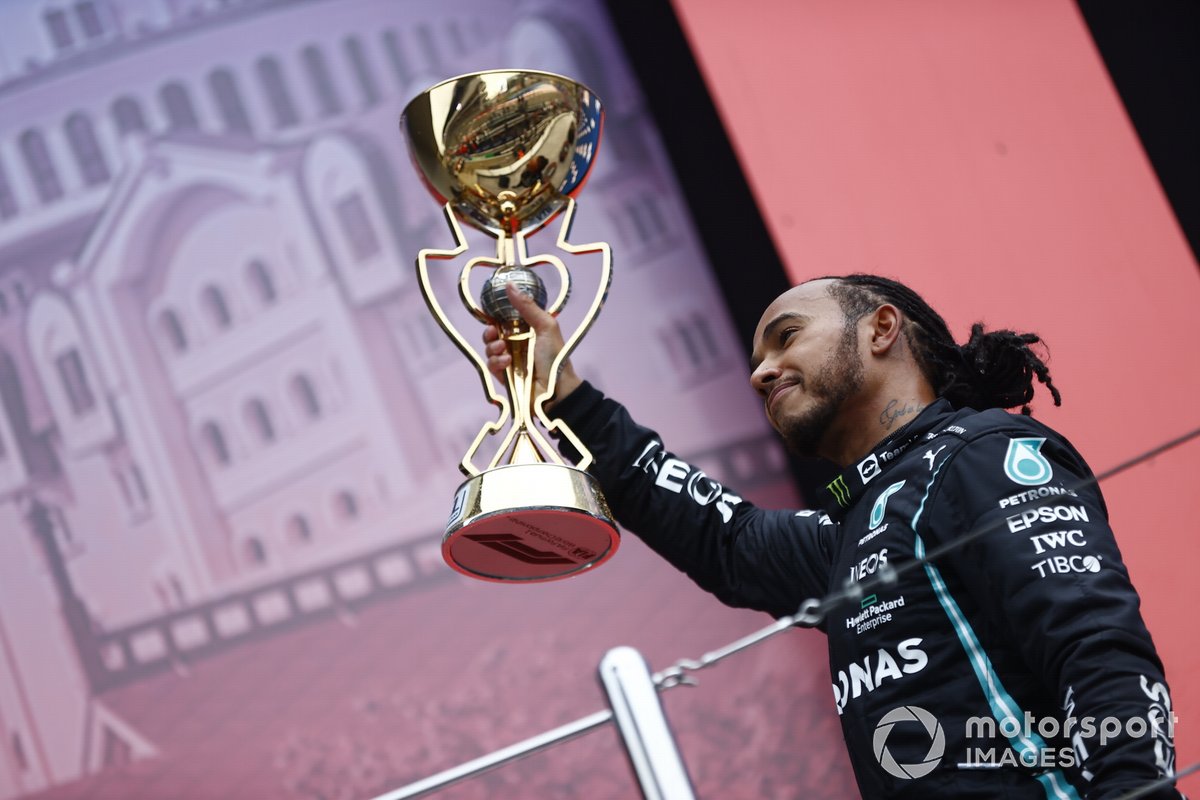 The late rain allowed Max Verstappen to recover to second place, meaning Hamilton’s championship lead is just two points heading to Turkey. With the title battle so finely poised, calls such as the switch to inters in Sochi could prove critical.

F1 is not a game of chance. It’s a game of strategy. So is winning big in poker or casino. See where your strategy can get you. https://promo.partypoker.com/en/promo/lp/motorsport