The tiny margin between Formula 1's title protagonists Red Bull and Mercedes is forcing both to rethink their aerodynamic set-up at races this year.

With speed gains in any area now being enough to swing form one way or another, the two teams have been locked in a game of cat and mouse about set-up approaches.

Of particular focus has been downforce levels, and especially rear wing configurations, as both balance the right level of downforce needed against the drag and impact this will have on tyres for qualifying and the race.

The drama surrounding flexi-wings fuelled intrigue about the designs of both teams, but that's not been the only development in a fight that is incredibly tight. 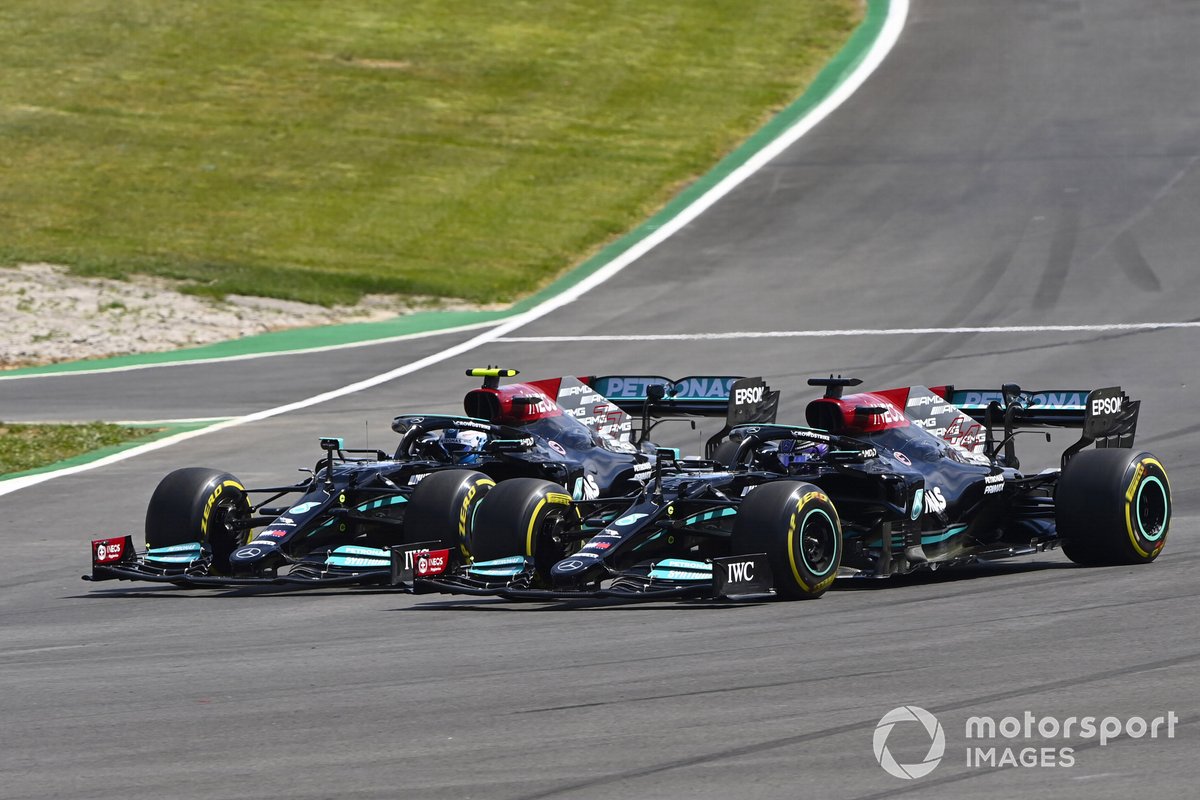 The Portuguese Grand Prix was the first real sign that the teams were so close to each other that they were making concessions in order to one-up their rival.

In that instance, Lewis Hamilton's car was fitted with a lower downforce rear wing, which gave him the straight line speed boost needed to overhaul not only Verstappen but his team mate too.

The wing used by Hamilton employed the double wing pillar configuration, but also features a smaller mainplane and top flap, with the latter having a much shallower V-groove in the centre too. 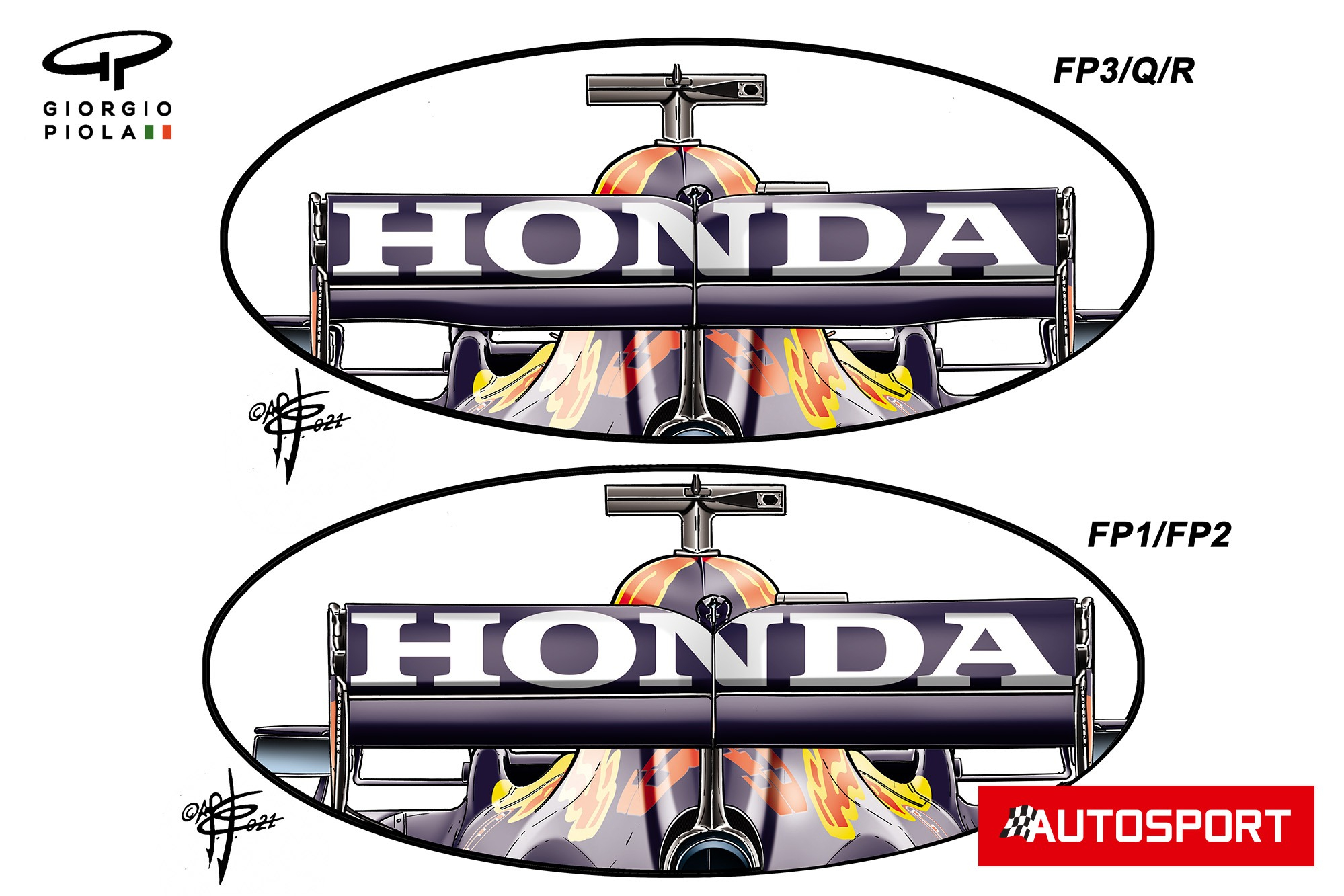 It was in Spain where the drama increased though, as Red Bull had arrived with a new rear wing that would be traditional fare for what is considered a high downforce circuit.

The wing featured the more traditional shape and deeper profile in order to provide the downforce and balance required by the lower speed corners of the Circuit de Barcelona Catalunya.

However, with an eye on its rival down the pitlane, and not wanting to be susceptible to being overtaken, as it had been in Portugal, Red Bull switched to its spoon shaped rear wing for FP3, qualifying and the race.

This, of course, was the catalyst for the discourse over flexi-wings, as Lewis Hamilton and Toto Wolff made comments that threw the practice under the spotlight once more. 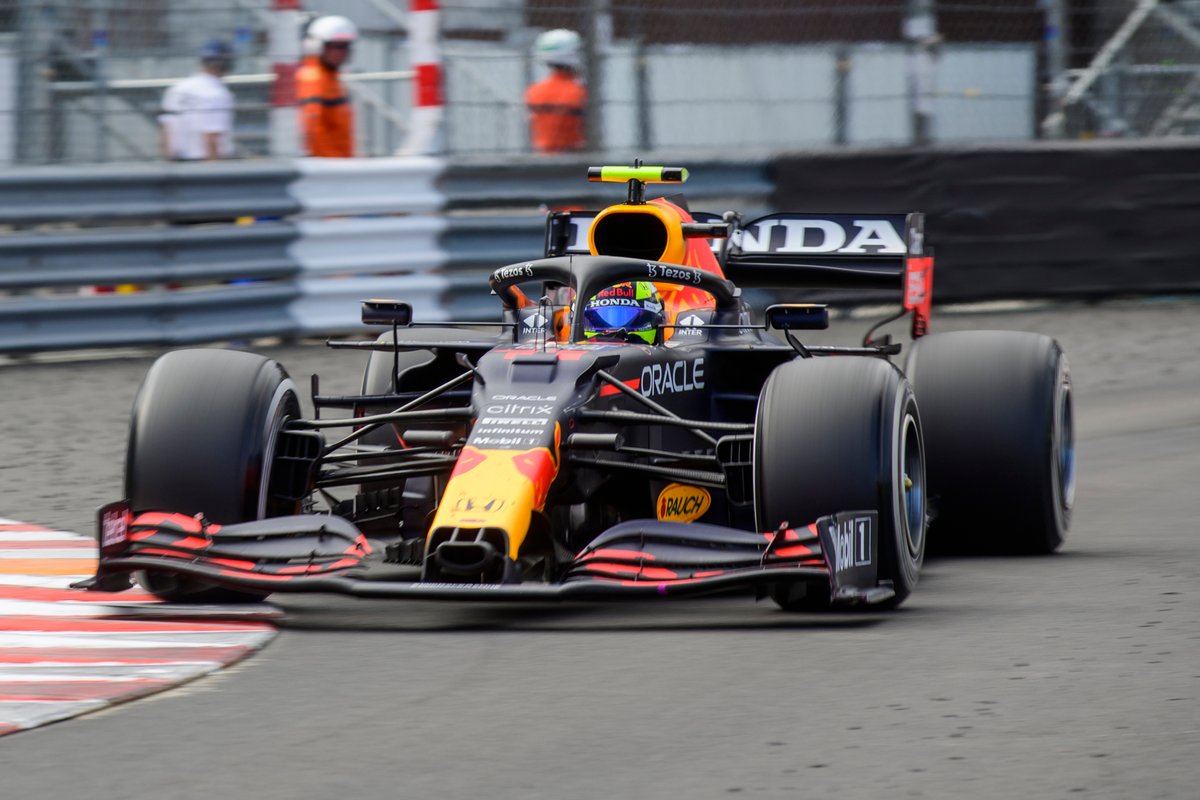 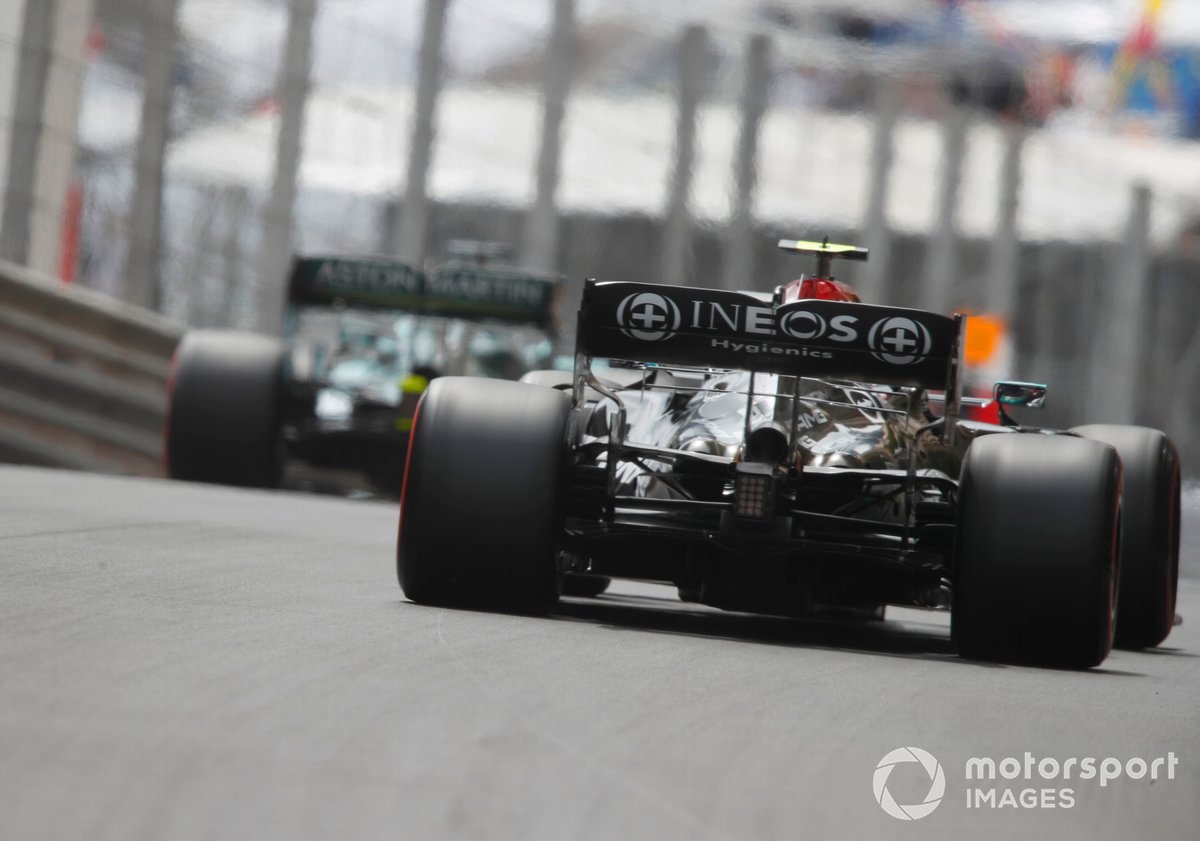 The higher downforce wing was obviously on the menu for both Red Bull and Mercedes as the sport returned to Monaco.

But, unlike the other teams, Red Bull opted to run without a T-wing for the extra stability and nominal downforce it can provide.

Meanwhile, over at Mercedes, it opted for its more simplistic but marginally more effective double element T-wing to try to help stabilize the rear end and give its drivers a little more confidence on a circuit that was never going to be a happy hunting ground for the silver arrows.

Red Bull was all set to take centre stage in Azerbaijan, as the threat of protests regarding its rear wing intensified.

But, it arrived at the street track with an entirely new design, one with the express intent of cutting downforce and drag and essentially nullifying the need for a wing that overtly flexed. 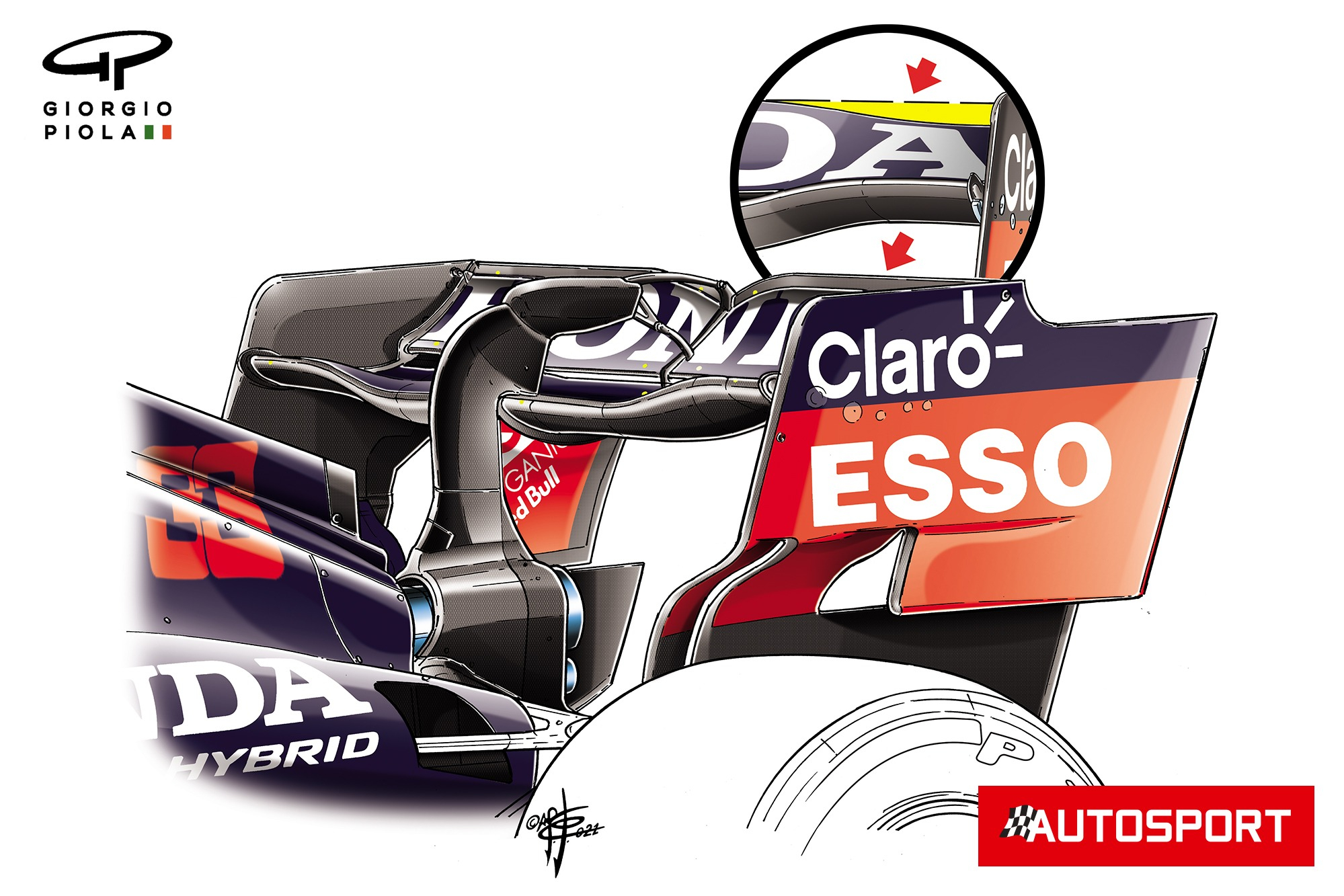 The new design featured a more gentle curvature to the lower portion of the mainplane, whilst the design features normally added to the endplate, such as the upwash strikes, serrated cutout and sinuous louvres, were all removed.

Meanwhile, Mercedes was struggling to get the best out of the W12 during Friday's free practice sessions in Azerbaijan and so opted to split its drivers once more.

Bottas pressed-on with the double pillar configuration that was also set-up with more downforce in mind, whilst Hamilton switched to the single pillar arrangement with a lower downforce configuration.

And, whilst Bottas continued to struggle, even though the extra downforce should have helped fire temperature into the tyres, Hamilton's W12 came to life and put him back in contention with the front runners.

The new technical directives surrounding the flexi-wings came into force for the French Grand Prix, putting to bed any question marks over the legality of the wings being used by the teams.

However, the game of cat and mouse between Mercedes and Red Bull continued at Paul Ricard, as whilst Red Bull ran the pre-Baku specification rear wing during Friday's sessions, it made the switch to the lower downforce wing for the rest of the weekend. 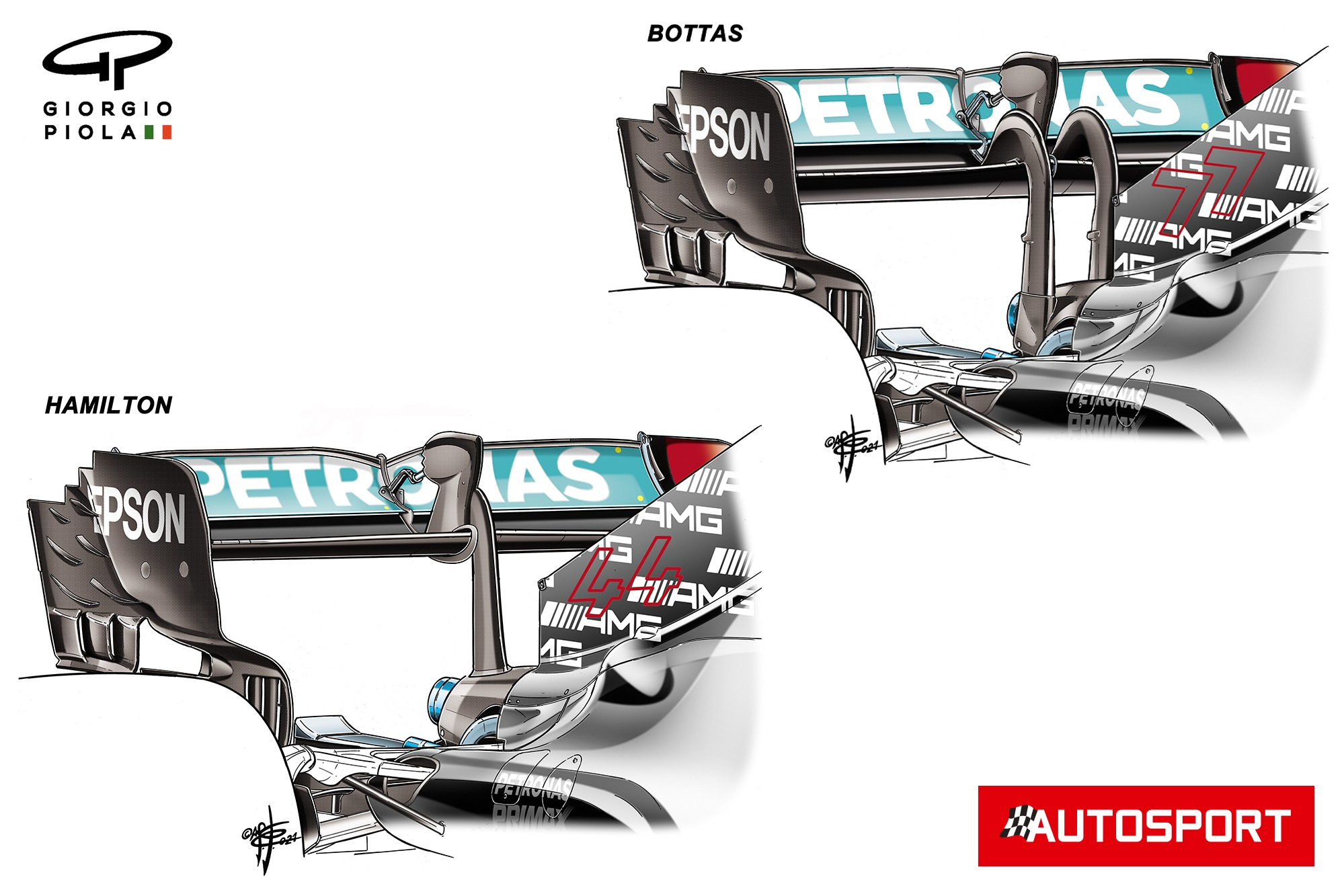 Mercedes went in the opposite direction though, as whilst it tested both versions of its rear wing on Friday, it opted for the higher downforce arrangement on both cars for qualifying and the race, which was once again paired with the single centrally mounted pillar, rather than the double swan-neck pillar arrangement.

The choice between the two configurations not only has a bearing on the performance of the wing under normal conditions though, as the strength of the DRS when it's deployed also has to be factored in.

In the end, Red Bull's low downforce solution won out: as it gave Verstappen the straightline speed advantage that helped him hold off Hamilton after the first stops, and then overtake the Briton late on.

It's been fascinating to see how the battle over wings has played out over the course of the first seven races of the season, as it's a sort of mini tactical battle between the pair that's forcing both to make a choice that ultimately neither is probably comfortable with.