The Monaco F1 curse Leclerc is looking to shake

As Charles Leclerc looks to hit back in the Formula 1 title race against Max Verstappen, scoring pole position in Monaco was always going to be an important achievement.

The odds are heavily stacked in his favour for Sunday given the difficulty in overtaking around the streets - yet this is a result that goes far beyond the academic result.

Leclerc grew up in Monaco, and now finds himself racing around the streets which he would navigate on the bus to school every day as a kid. He gave a nod to his childhood connection to the track on social media earlier this week, sharing a touching piece of artwork of himself next to his Ferrari talking to his younger self by a go-kart.

A win in Monaco would mean the world to Leclerc - but even finishing the race would be an achievement, given his rotten record around his home streets. In five attempts, Leclerc has failed to see the chequered flag in Monaco, leaving him with a ‘curse’ he will look to shake today. 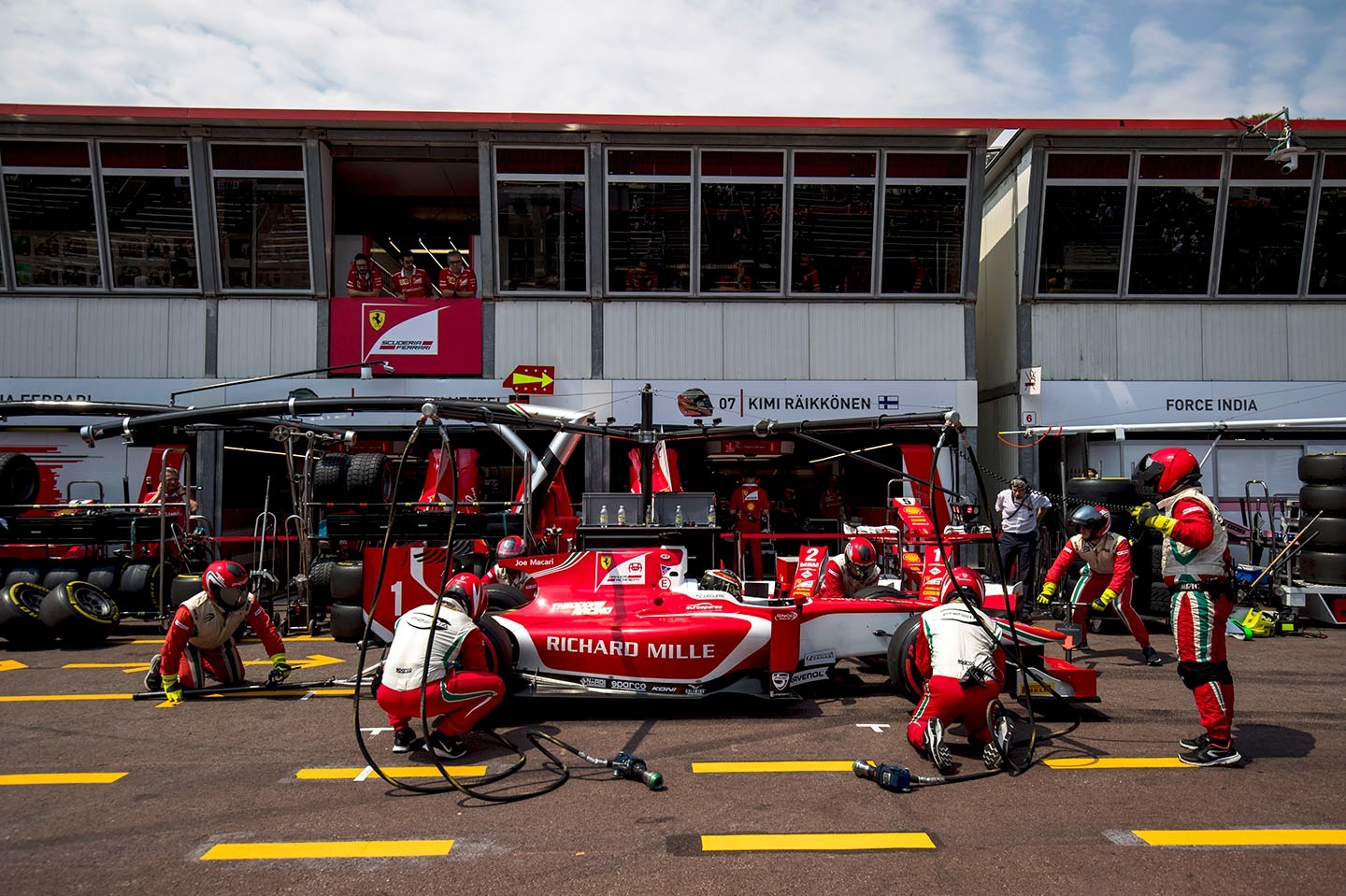 Leclerc’s first time racing in Monaco came in 2017 during his successful charge to the Formula 2 title that would cement him a place on the F1 grid for the following year.

Leclerc topped both practice and qualifying, taking pole by just twelve-thousandths of a second ahead of Alex Albon. He was able to open up a healthy lead over Oliver Rowland approaching half-distance, only to get caught out by a safety car period that dropped him down to fourth. Things went from bad to worse when a mechanical issue on the front-left tyre after his pitstop forced Leclerc to retire.

Writing in his column for Motorsport.com at the time, Leclerc admitted he knew after that his weekend was “finished”, given he would have to start the sprint race from the back. He struggled to make much progress from 17th on the grid, tangling with Norman Nato in an incident that resulted in a time penalty before Leclerc pulled into the pits and retired, marking two DNFs to start his Monaco record. 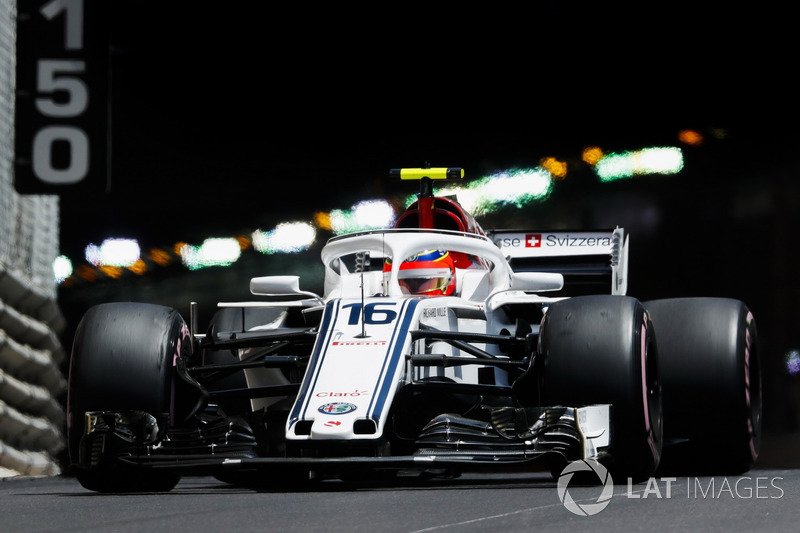 Upon graduating to F1 with Sauber - now Alfa Romeo - Leclerc knew he was never going to realistically be in the fight far up the order for his Monaco Grand Prix debut. Reaching Q2 was a notable achievement, securing 14th on the grid ahead of more experienced team-mate Marcus Ericsson, but the race was always going to be hard to make much progress in.

He sat 12th entering the closing stages as he tailed Brendon Hartley, only for a failure on his front-left brake entering  the Nouvelle Chicane to cause Leclerc to run straight into the rear of the Toro Rosso car.

A retirement with six laps remaining was not how Leclerc wanted to celebrate his first F1 race at home, yet the signs of pace had been encouraging. 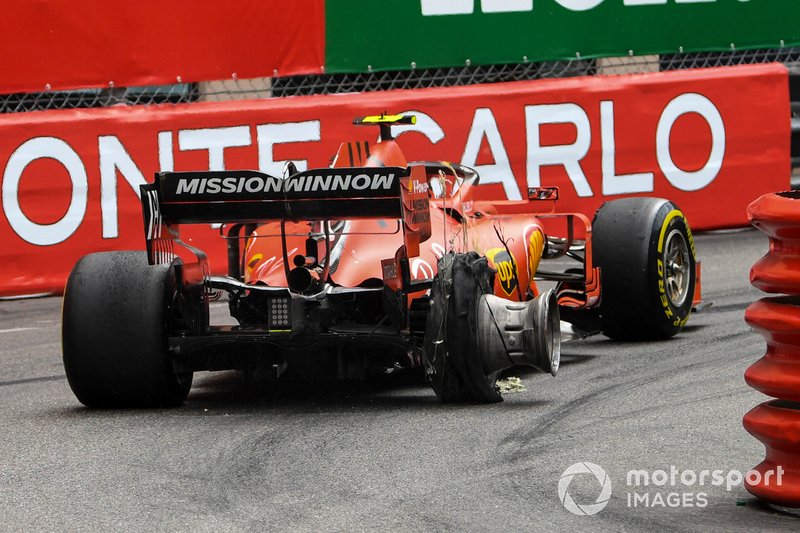 Leclerc arrived in Monaco for the 2019 race with a very real chance of fighting for victory. Ferrari's form in the early part of the season had been encouraging, and without a power unit issue, he would have surely won on his second outing for the team in Bahrain.

After topping final practice for Ferrari, Leclerc was in the hunt for pole - yet he didn't even make it past the first stage of qualifying. The team had confidence that his lap of 1m12.149s would be enough to advance to Q2, only for a flurry of improvements to bump him down the order and ultimately eliminate him in 16th place.

Leclerc was determined to fight back, and he made some decent early progress by picking off Lando Norris and Romain Grosjean in the early stages. But an attempt to send it up the inside of Nico Hulkenberg into La Rascasse - an overtaking spot he kept trying to use in F2 - resulted in contact and a spin for Leclerc, who picked up damage to his right-rear tyre that forced him to retire once again. 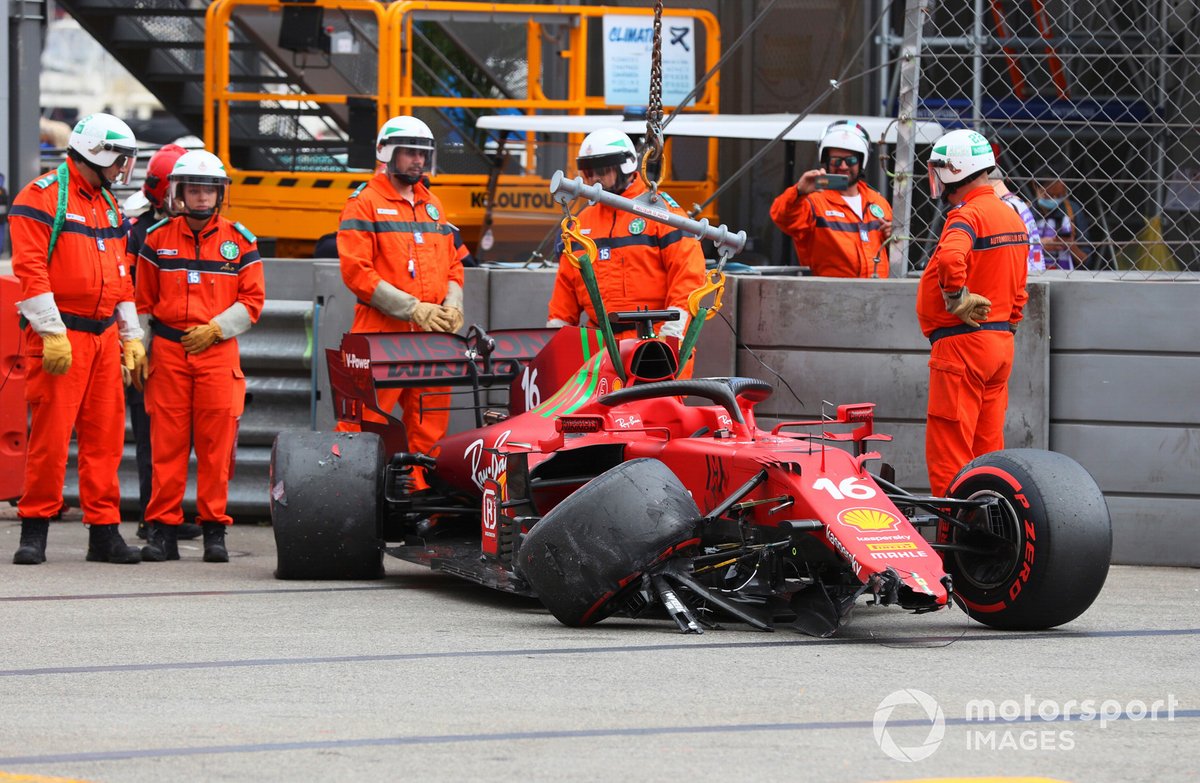 Marshals remove the car of Charles Leclerc, Ferrari SF21, from the circuit

2021 was not a year that Leclerc anticipated being in the hunt for any kind of real success in Monaco. While Ferrari had taken a step forward from its miserable 2020 - when there was no Monaco race due to the COVID-19 pandemic - it remained a step behind Mercedes and Red Bull.

It meant that when Leclerc and team-mate Carlos Sainz starred through practice, Ferrari was quick to downplay its chances. It only really started to believe it was in contention come qualifying when it remained competitive, setting up a tense fight for pole.

Leclerc took provisional pole with his first run in Q3, but as he pushed hard to improve on his final lap, he crashed hard at the exit of Swimming Pool, resulting in a red flag. It prevented Max Verstappen from improving, meaning pole belonged to Leclerc, but serious concerns were raised about the condition of his car.

A gearbox change was weighed up by Ferrari, but the team deemed there was “no serious damage” to the internals that would warrant any action that may result in a grid penalty. Leclerc would start his home race from pole for the first time - or so it seemed.

When Ferrari fired the car up for the reconnaissance laps to the grid, an issue emerged that meant Leclerc could not get out before the pitlane closed. The team ultimately found an issue with the left driveshaft that prevented Leclerc from taking the start at all.

Will Leclerc end his Monaco curse?

Leclerc’s rotten Monaco record has been a natural talking point throughout this weekend, particularly after his charge to pole position on Saturday. But even when talking after qualifying, Leclerc made clear he is giving no thought to any kind of home race hoodoo.

“I'm not superstitious at all,” Leclerc said. “We’ve had a smooth weekend until now, and we're starting in the best place possible for tomorrow's race. So hopefully, we have a clean race tomorrow, and we finally have a good result at home.”

It would be a big result for the championship, but victory would also mean a huge amount to Leclerc on an emotional level - and put an end to any narrative around his Monaco ‘curse’.