Mercedes has always had a weakness at slow speed circuits, with its long wheelbase and tyre characteristics not perfect for Formula 1 venues like Monaco and Singapore.

But with a tight battle on its hands against Red Bull, which excels at such venues, the world champion team pulled out the stops with a suspension revamp aimed to cure its Achilles' Heel.

Whether the changes helped or not we will never know, as Valtteri Bottas was able to extract more from his car over the weekend than Lewis Hamilton.

But it was clear that the scope of the revisions certainly left Mercedes chasing an understanding of how best to extract pace from the car and tyres – which could well have played a factor in its disappointing result.

Mercedes' progress in the opening races of the season has mainly come from understanding and applying the right setup, be it mechanical or aerodynamic, with the visible rear end instability seen during pre season dialled out with the help of only a few subtle updates.

However, the team introduced probably its most visible upgrade of the season so far in Monaco, as a new steering, suspension and brake assembly arrangement was deployed. 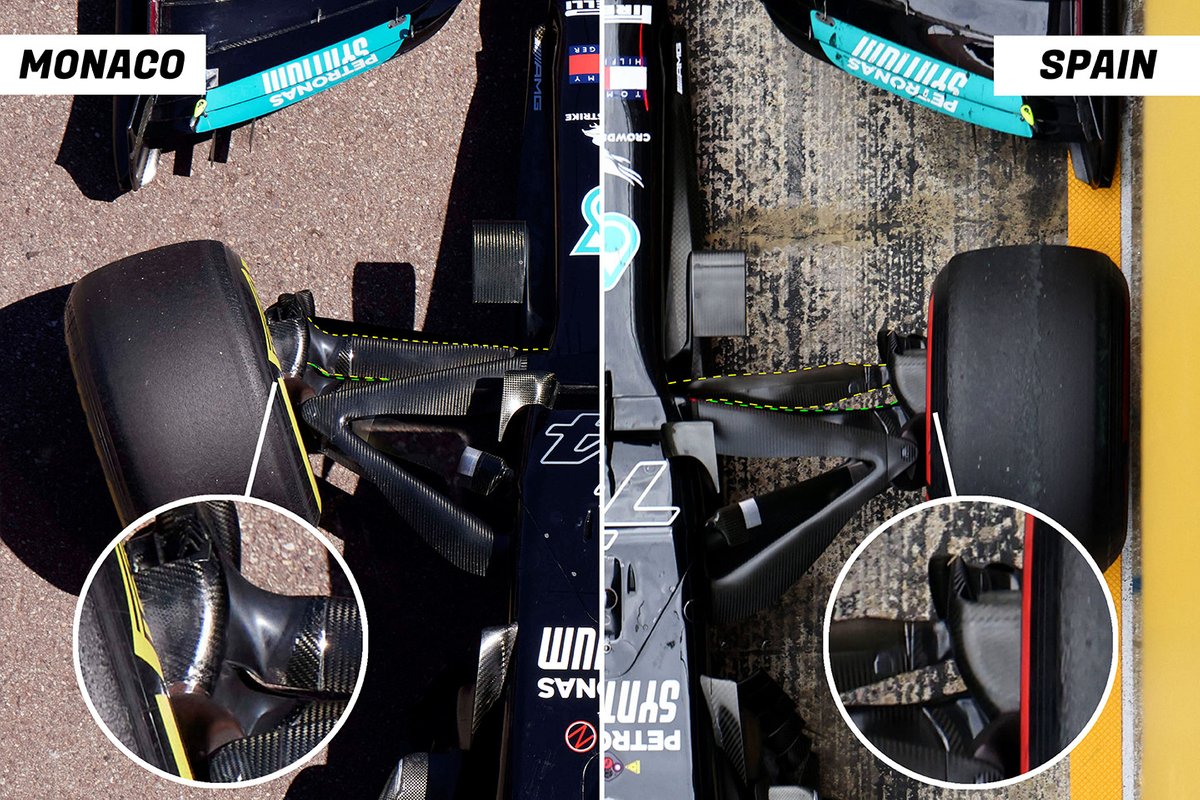 The low speed challenges of the Monte Carlo street circuit are like no other on the calendar and so all of the teams make concessions for this.

But, with a limousine-like wheelbase, the W12 perhaps needs a little more of a helping hand than most when it comes to navigating the likes of the famous Fairmont hairpin.

As can be seen in this comparison of the car from above, the track rod and lower wishbone were redesigned in order that they met the upright further forward than they had before.

The track rod (yellow dotted line) is not only broader but it's clear to see how much more dominant the flexure is where it meets with the brake duct inlet (inset).

There's also a much larger gap between the two elements, as can be seen with the green dotted line on the forward arm of the lower wishbone.

Clearly changes made by the team to help improve the low speed manoeuvrability of the W12 had a knock-on effect to the design of the brake duct too. 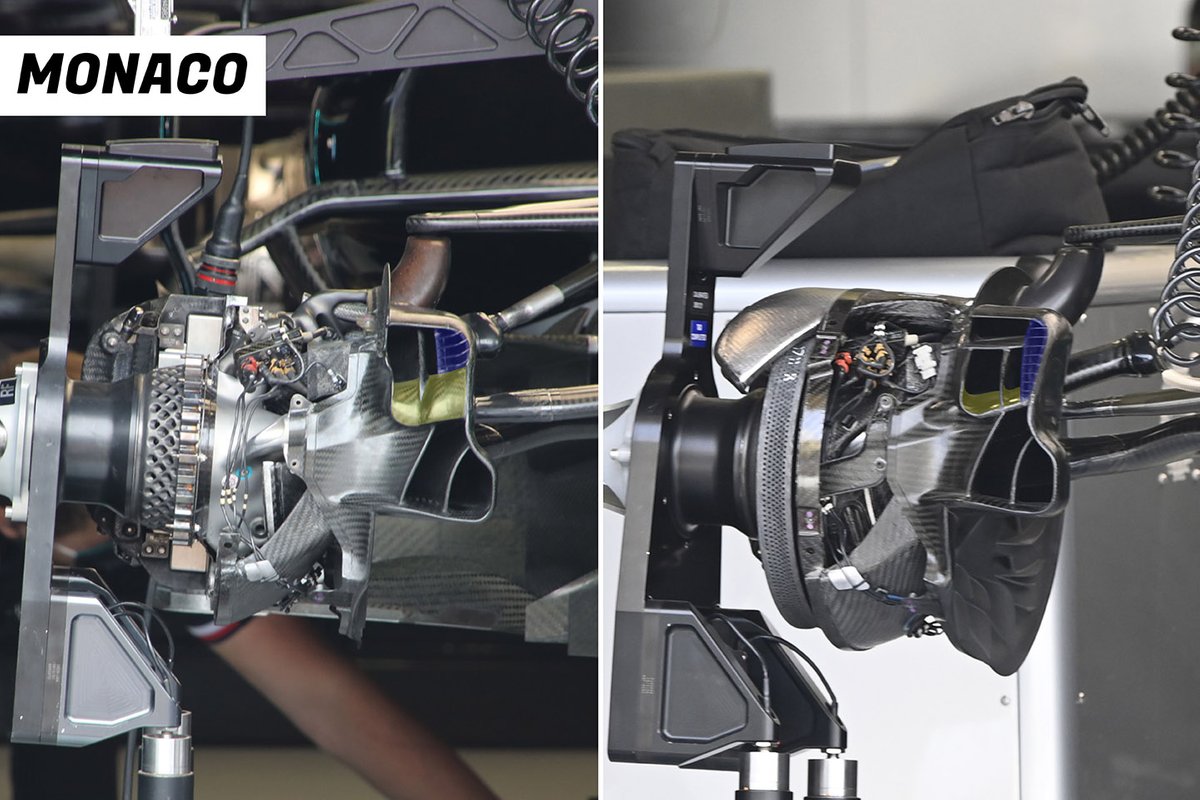 The changes made to accommodate a revised track rod and wishbone layout are made clear by the bulkier enclosure for the track rod (highlighted in yellow), which meant that to get a similar volume for the section of the inlet that's meshed off (highlighted in blue) the team had to sacrifice the rest of the inlet and make changes to how it was partitioned.

This means that the space is divided by just a single spar, rather than being divided by another horizontal section as in the normal arrangement.

This also goes to show how the brake duct is used both as a way of cooling the brakes and as a medium for moving airflow through the assembly for aerodynamic gain, with the latter sacrificed to maintain the required level of cooling for the street track. 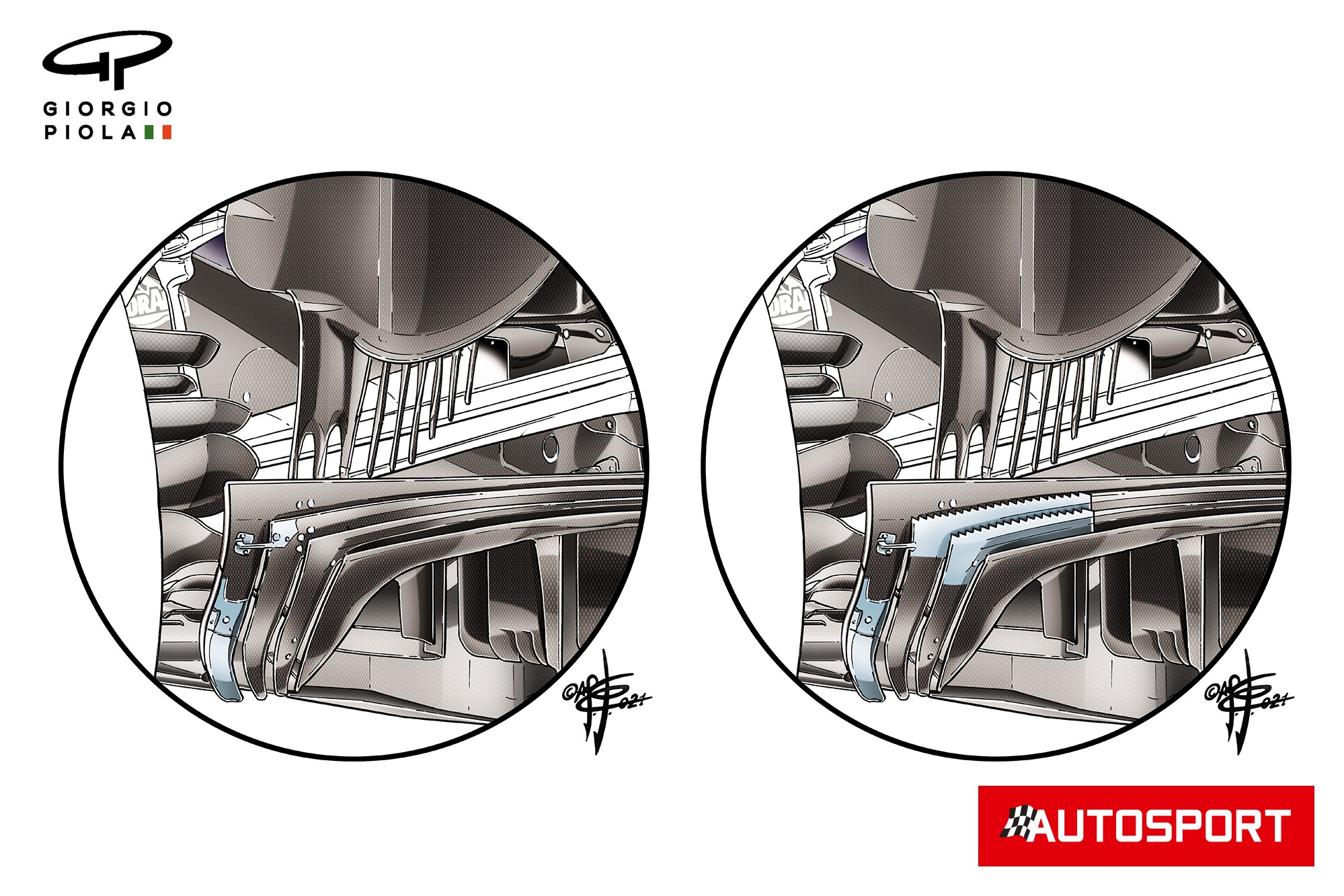 The most interesting development of the weekend probably goes to Red Bull for the metal inserts found on the outer corner of its diffuser, as the two Gurney flaps sandwiched in the middle of the assembly had serrated edges added to them.

These serrations create a series of small vortices that will work the airflow a little harder, especially important given the lower speeds that the cars operate at on the streets of Monte Carlo.

It also fitted a revised front wing to its car too, with a number of subtle alterations that the team hoped would give it the necessary performance uplift for the slow speed characteristics of the street circuit. 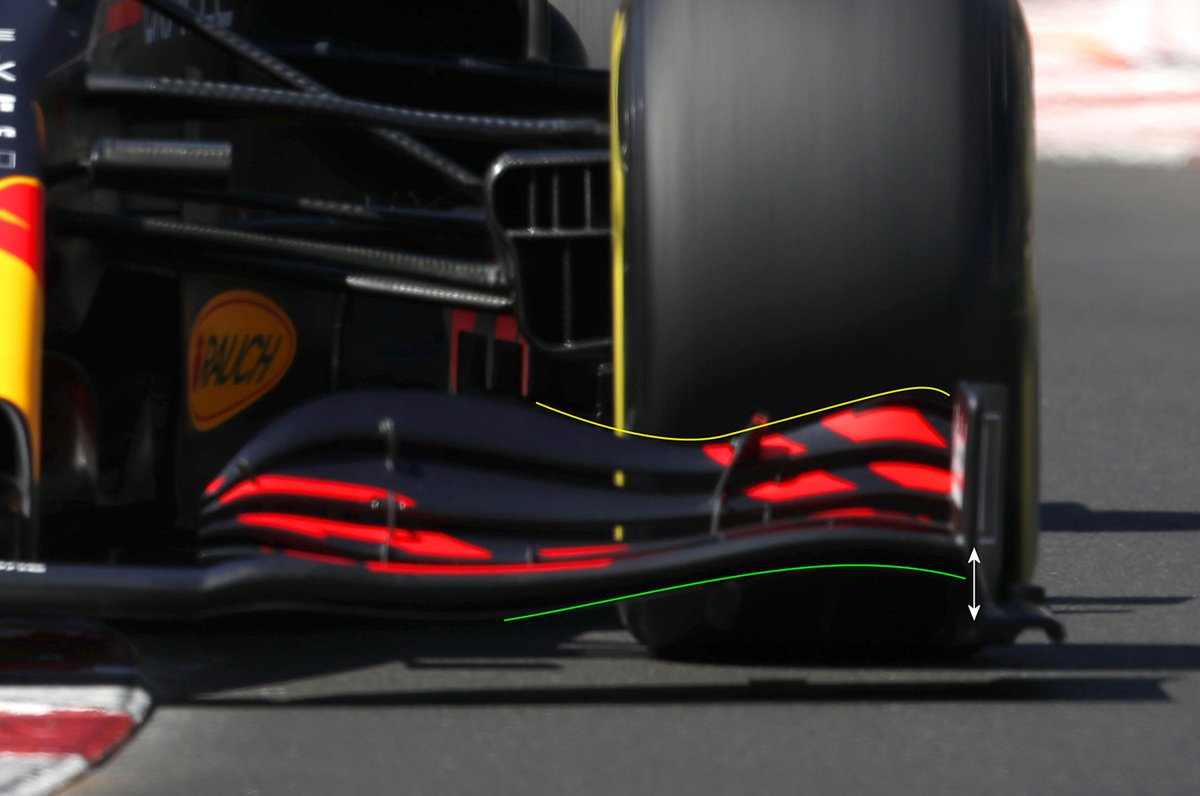 The revisions start with the mainplane's leading edge, which is shaped differently in the outer section, with the strakes beneath the wing being altered slightly too.

Meanwhile, the shape of the upper flap was also refined, with the dip in the central section offering the most visible reference point to how the wing is more loaded in the outer section.

Alfa Romeo has become the ninth and likely the last team to adopt the Z-shaped floor configuration this season, given Haas has no intention of bringing big upgrades to the VF-21 this season.

The floor introduced by Alfa Romeo includes what is now standard fare - a cutout paired with two outwardly angled fins. 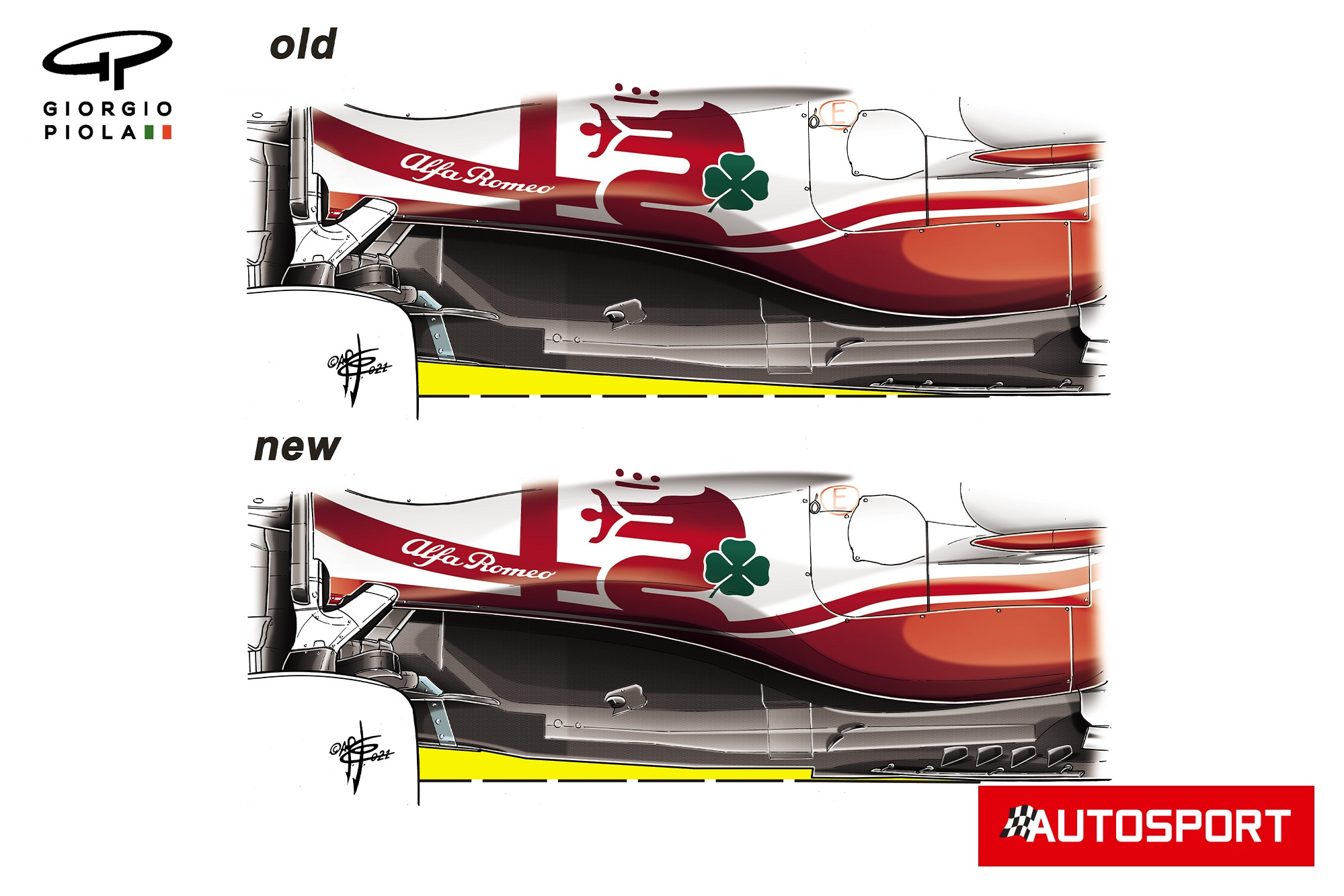 That said, those two angled fins were already a fixture on the C41's floor and have not been moved to a more outboard position to coincide with the cutout as you'd expect.

Four more twisted and outwardly angled fins have been added to the floor alongside the detached floor scrolls, which likely drive the airflow toward the new floor cutout to help enhance its effect.

This is a similar design feature to ones seen on several cars this season, with Red Bull, AlphaTauri, Williams and Aston Martin all sporting their own variants.

The cutout allows a section of the floor to be returned parallel to the car's centerline, giving the designers more of an aerodynamically familiar behaviour than the tapered floor the rules intended. 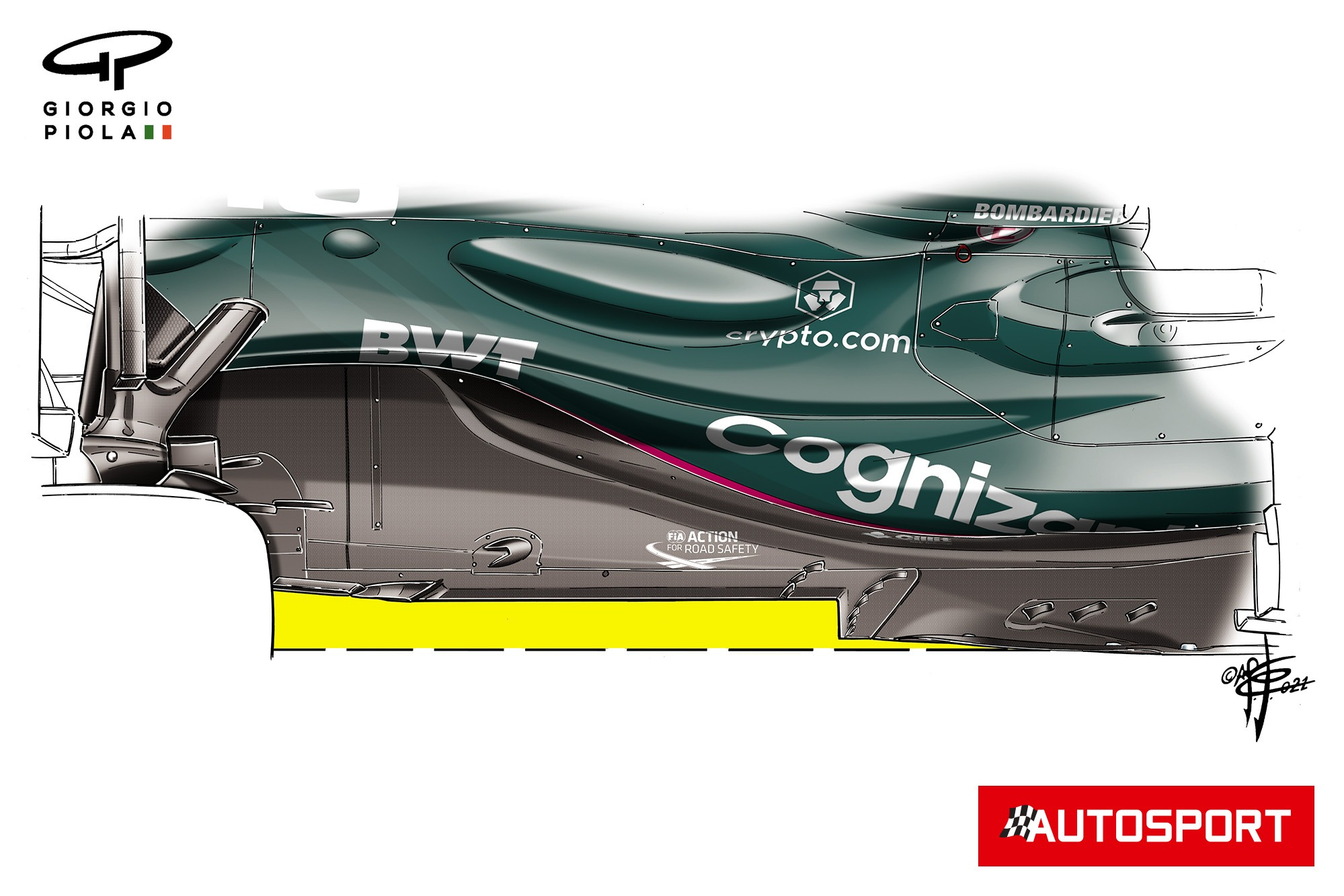 Aston Martin has been the most aggressive in that regard, cutting away a substantial section of the floor in order that only a short section has to be tapered ahead of the rear tyre. 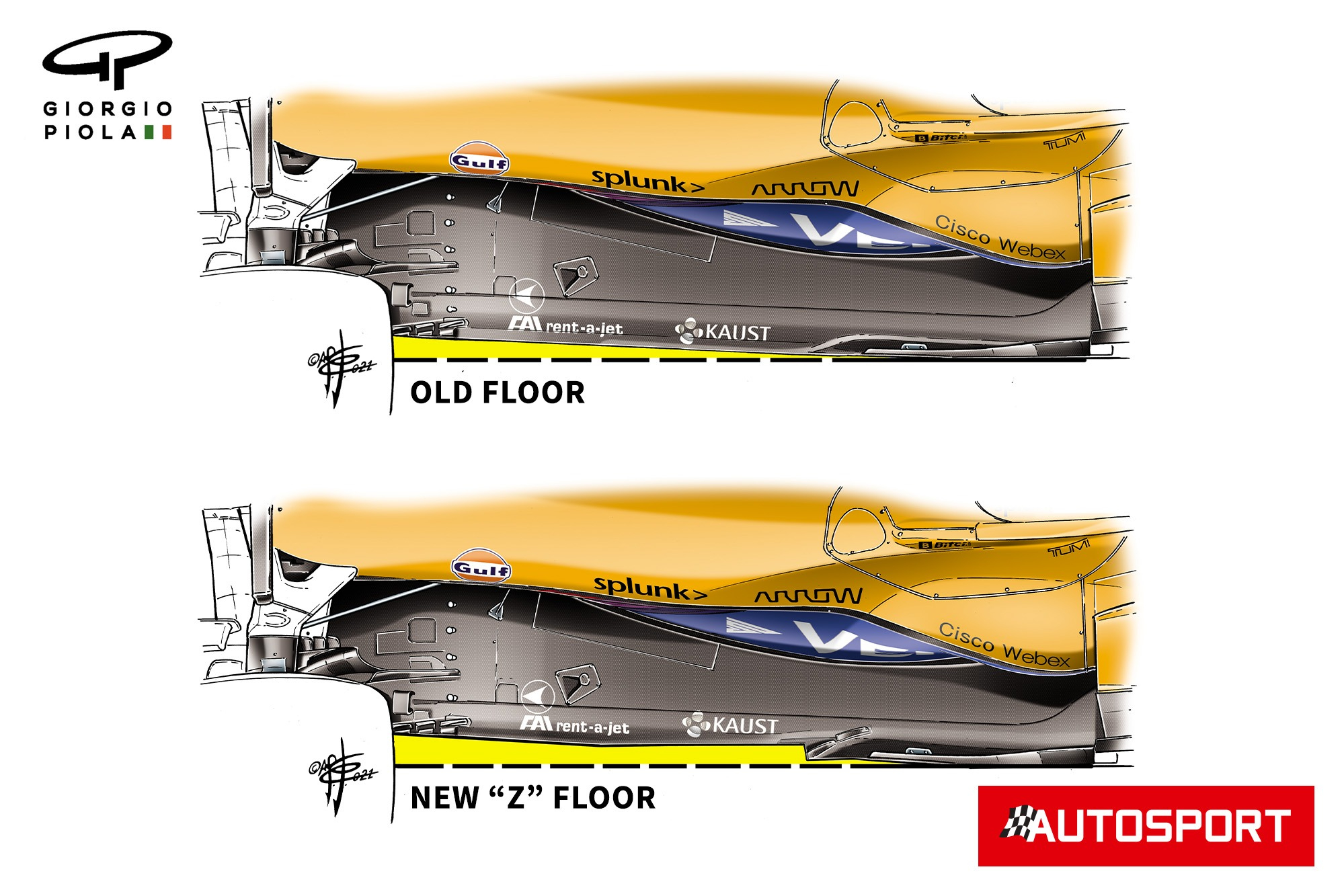 McLaren introduced its Z-shaped floor at the Spanish GP and it still features a fairly sizeable tapered section at the rear. 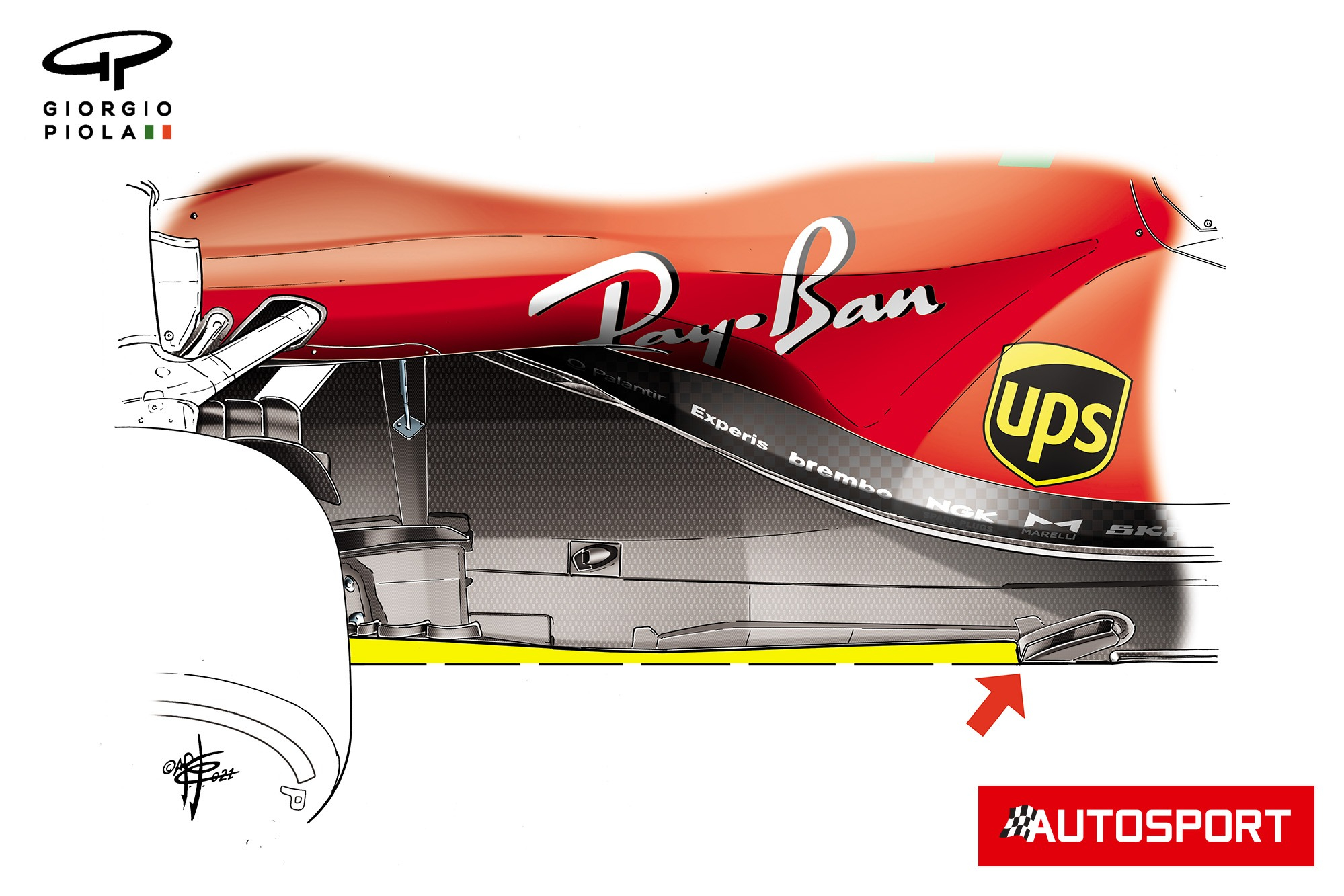 Ferrari tested its own Z-floor in Portugal but only raced it for the first time in Monaco. 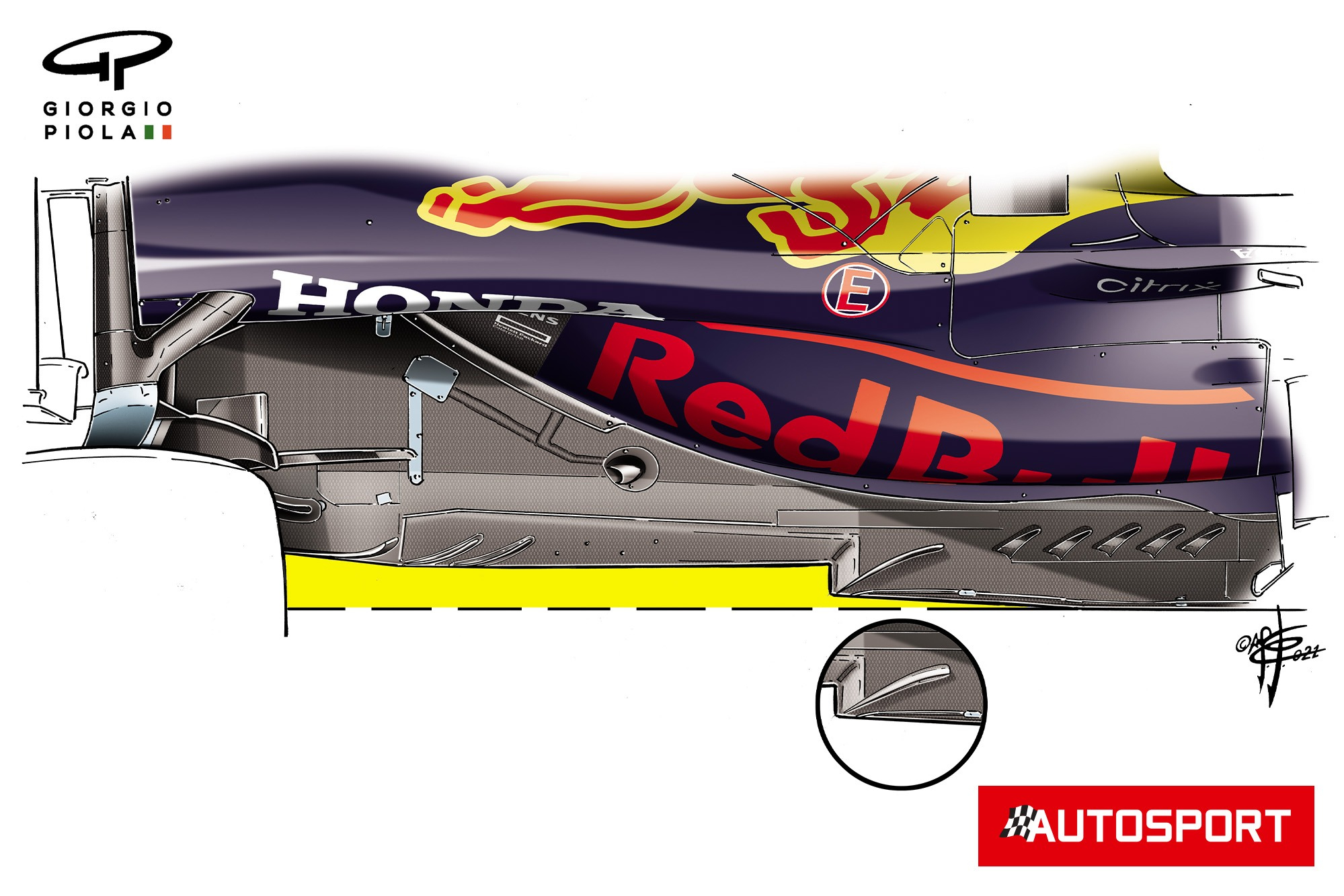 Red Bull had the Z-shaped floor at the beginning of the season but has made optimisations during the opening few races, with the fin and detached floor scrolls now creating a junction at the cutout. 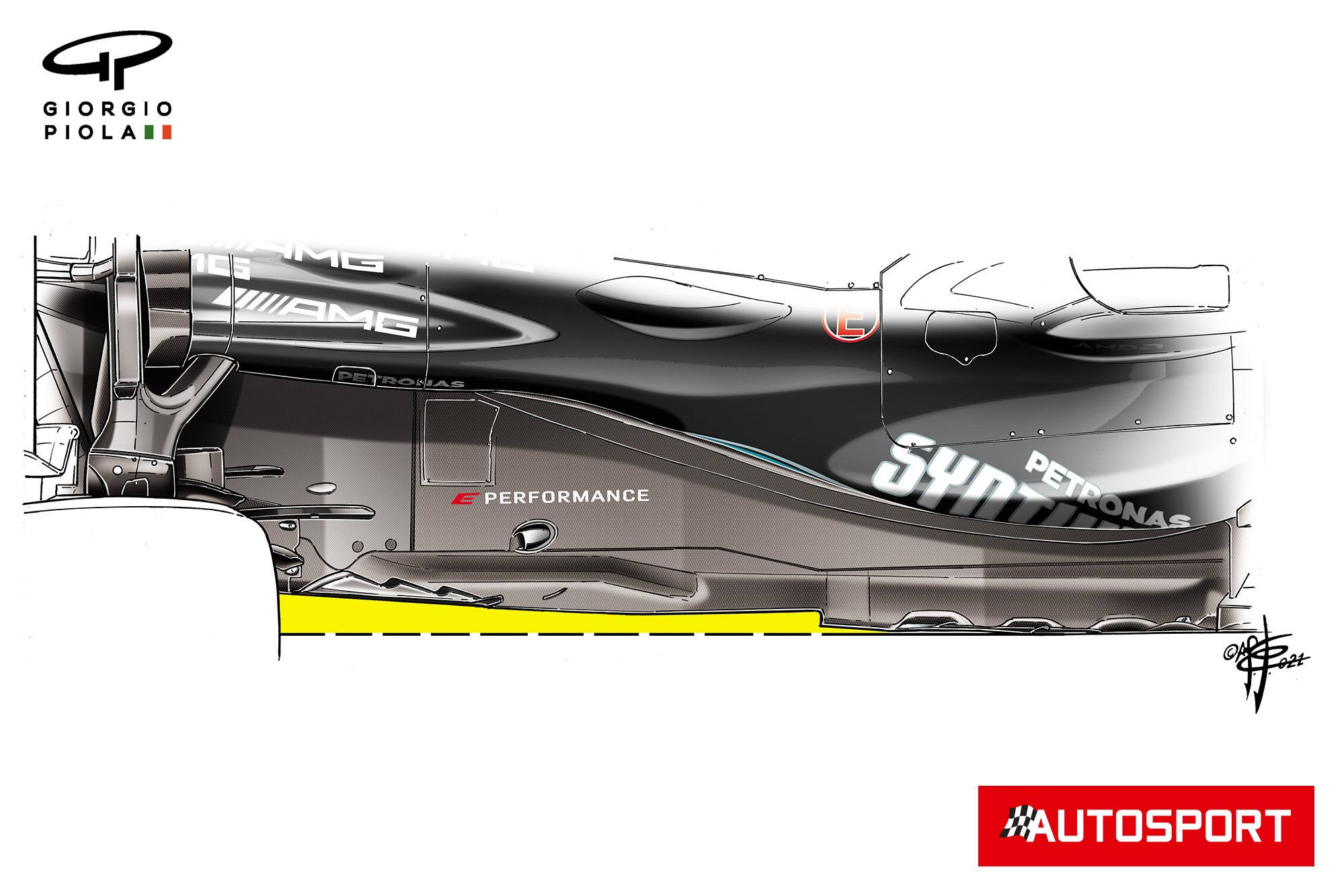 Mercedes hid its floor during the car's launch in an effort to prevent other teams, who may not have looked into the arrangement, from getting a head start in designing its own variant. It only has a very short section of the floor that's been returned parallel to the car's centreline, as it has focused more of its attention on the rear section, which whilst tapered also has a sizeable array of aerodynamic furniture on the top surface and has been upturned ahead of the rear tyre.

Alfa Romeo has also retained the scroll-like edge on the side of their floor as it tapers back towards the rear tyre, with the designers using this as a way of manipulating the airflow, in an effort to reduce the disruption that might otherwise be caused to the diffuser. 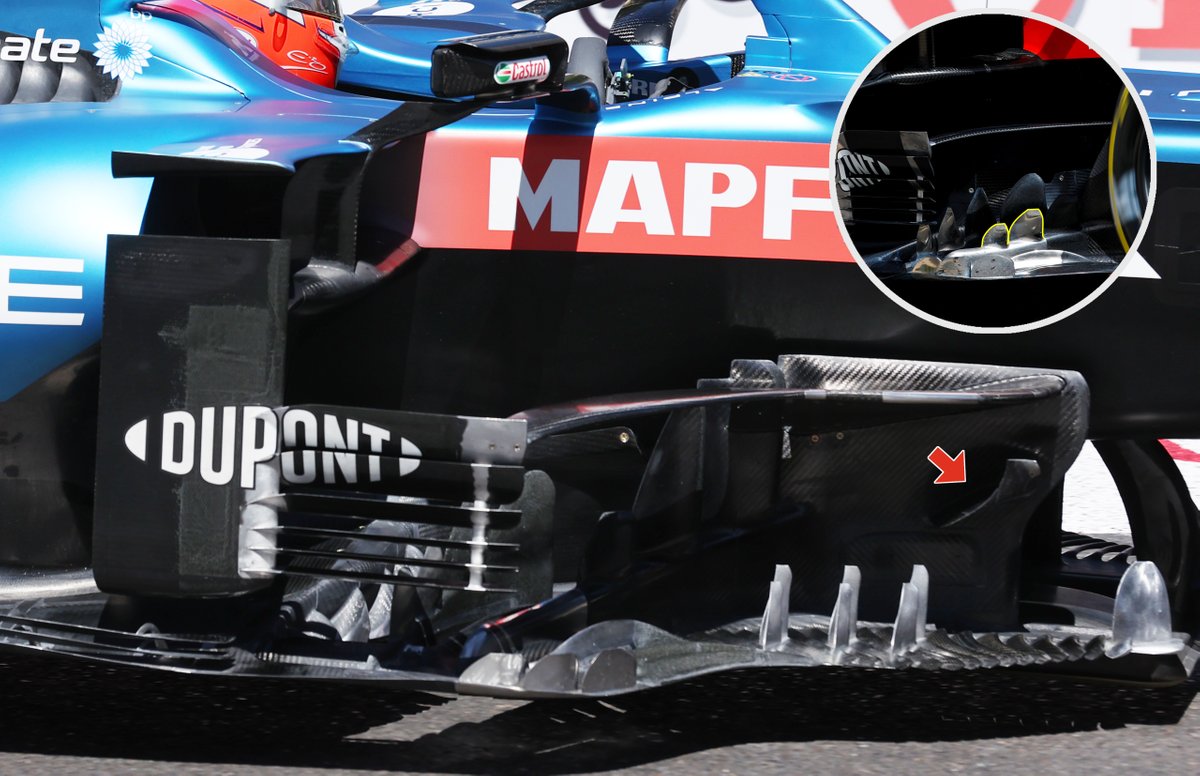 Alpine continues to search for performance with race by race optimisations, with the bargeboard cluster the subject of those alterations for the Monaco GP.

The team has not only added a substantial horn-like winglet that hangs from the main vertical element (red arrow), it also deleted some of the 'teeth' from the cluster too (inset, highlighted in yellow)

Paired with this, the team has also run a slightly different floor configuration in Monaco, suggesting that it has options available to it depending on the prevailing circuit characteristics and overall load required.