Formula 1 has enjoyed a rollercoaster title fight in 2021, but Sunday’s Saudi Arabian Grand Prix brought new levels of drama as things got ugly between Max Verstappen and Lewis Hamilton.

It was an incident-packed race that saw Verstappen and Hamilton go wheel-to-wheel on a number of occasions, and eventually come to blows, sparking two penalties and plenty of fallout.

It has all left the championship on a knife-edge heading to Abu Dhabi. Verstappen and Hamilton will arrive at Yas Marina level on points at the top of the standings, setting the stage for a thrilling finale with tensions at an all-time high.

It looked at one stage like Sunday’s race in Jeddah could prove to be a quiet affair. Hamilton got away cleanly from pole and led the opening stages from Valtteri Bottas, leaving Verstappen in third and on the back foot.

Verstappen sent an early warning shot to Hamilton on the red flag restart as he refused to give up the lead into Turn 1. Hamilton had made the better start and got up the inside of Verstappen, but Max kept his foot in, running outside of the white lines and over the kerb to force Hamilton wide at Turn 2.

It meant Verstappen kept the lead and dropped Hamilton to third behind Esteban Ocon before the race was quickly red flagged again.

The FIA wanted to give Verstappen the chance to give up the position to Hamilton, leading to an offer being made to Red Bull by race director Michael Masi. Verstappen dropped back to third for the second red flag restart, but sent it into Turn 1 to pass both Ocon and Hamilton, giving him the lead once again.

The race settled down at the front amid a number of Virtual Safety Car periods for debris, but as Hamilton began to close up again on Verstappen, it set up the two final major incidents of their battle in Jeddah. 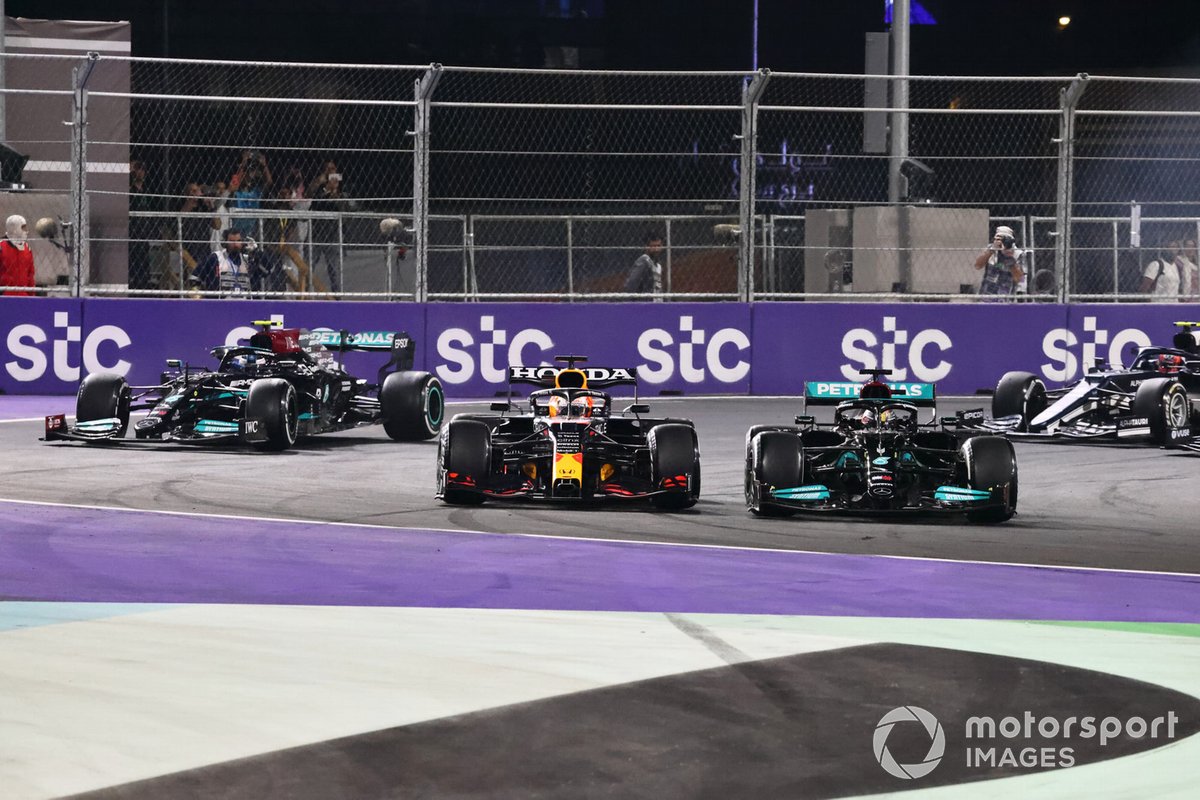 On lap 37, Hamilton gets a good run on Verstappen into Turn 1 using DRS, leading to a side-by-side battle.

Hamilton moved to the outside of Verstappen, but the Red Bull driver ran deep into the corner, causing them both to run wide. Toto Wolff called the incident “Brazil reloaded” after the race, while Hamilton said Verstappen was “crazy” on the radio.

The stewards quickly confirmed they were investigating what happened, and Masi gave Red Bull the call to give back the lead.

Verstappen slowed down later in the lap to let Hamilton past, but braked at a deceleration force of 2.4g as they approached Turn 27. His plan was to let Hamilton go ahead before the DRS detection point, which could help him re-overtake into Turn 1. Hamilton was left with front wing damage, and complained that he had been brake tested. The stewards announced there would be a post-race investigation into what happened.

Verstappen was then hit with a five-second time penalty for the first incident, as he was found to have left the track and gained a lasting advantage at Turn 1, all but ending his win hopes. He allowed Hamilton past on Lap 42, only to get DRS and then re-pass him into Turn 1, successfully pulling off his tactic.

But Hamilton was finally allowed through one lap later into the final corner. This time around, Hamilton made sure to push Verstappen as wide as possible, prompting the FIA to warn that it was a move close to warranting a black and white flag.

From there though, Hamilton was able to pull away at the front of the field, setting the fastest lap in the closing stages despite his damaged front wing. Verstappen would cross the line second, and was later hit with a 10-second time penalty for the braking incident. It had no bearing on the result, though, meaning the drivers are tied on 369.5 points heading to Abu Dhabi.

Hamilton said after the race Verstappen was “over the limit”, and that racing rules were only being applied to one driver. Verstappen saw it very differently, claiming there were now too many rules in F1 and that they should be left to racing.

Red Bull also felt aggrieved that Hamilton had not been investigated for his slow lap to the restart grid after the red flag, with Helmut Marko telling Autosport that he thought the stewards treat Red Bull differently.

Tensions have never been higher, and whichever way you view the incidents, the fire has been stoked ahead of the championship showdown on Sunday in Abu Dhabi.

It will be Lewis versus Max - and the winner will take it all.