Early concerns that the 2022 Formula 1 grid could be filled with lookalike cars, due to the strict constraints imposed by the revamped technical regulations, thankfully appear to be premature.

As the first real cars emerge, several big contrasts between the challengers have been noteworthy, with a close look at the two real cars we've seen so far – the McLaren and the Aston Martin - evidence that teams have approached the new regulations in very different ways.

This does come with a caveat concerning the front wing however, as while we've seen physical versions of both cars, only one has been shaken down so far. That's not to say what we've seen from McLaren is inaccurate, merely that with such a fast rate of development expected in the opening few months of these regulations, there's bound to be changes. It's also worth bearing in mind that the renders of the MCL36 differed from the physical version shown at the factory.

PLUS: Why F1’s fake war is underway and the real battle is to come

However, there are already suggestions that two schools of thought have emerged concerning how teams want to set up the airflow on a path that will reap further benefits downstream. Where we see the biggest contrast between the two is their approach to the design of the mainplane, with some scope available to the teams in terms of its height relative to the ground.

Here, Aston Martin has opted for even more clearance for its mainplane in the central region of the wing, to encourage more airflow under the assembly and onwards towards the large underfloor tunnels. As a trade off, this results in the team having to load the central portion of the upper flaps more. Meanwhile, McLaren appears to have gone in the opposite direction, with a spoon-shaped central section to its mainplane, with a more raised outer section.

Where the teams have found common ground though is that the mainplane and second elements have more chord than the upper flaps, while both are looking to overcome the regulations in the outermost part of the wing to generate more outwash than was intended.

The design of the nose is not too dissimilar, with both creating a slender body that tapers towards the chassis. Of the other two cars that we’ve seen, the Haas also follows this trend, whilst the AlphaTauri approaches things from a different angle, with a longer nose and all four of the front wing elements joined to it. 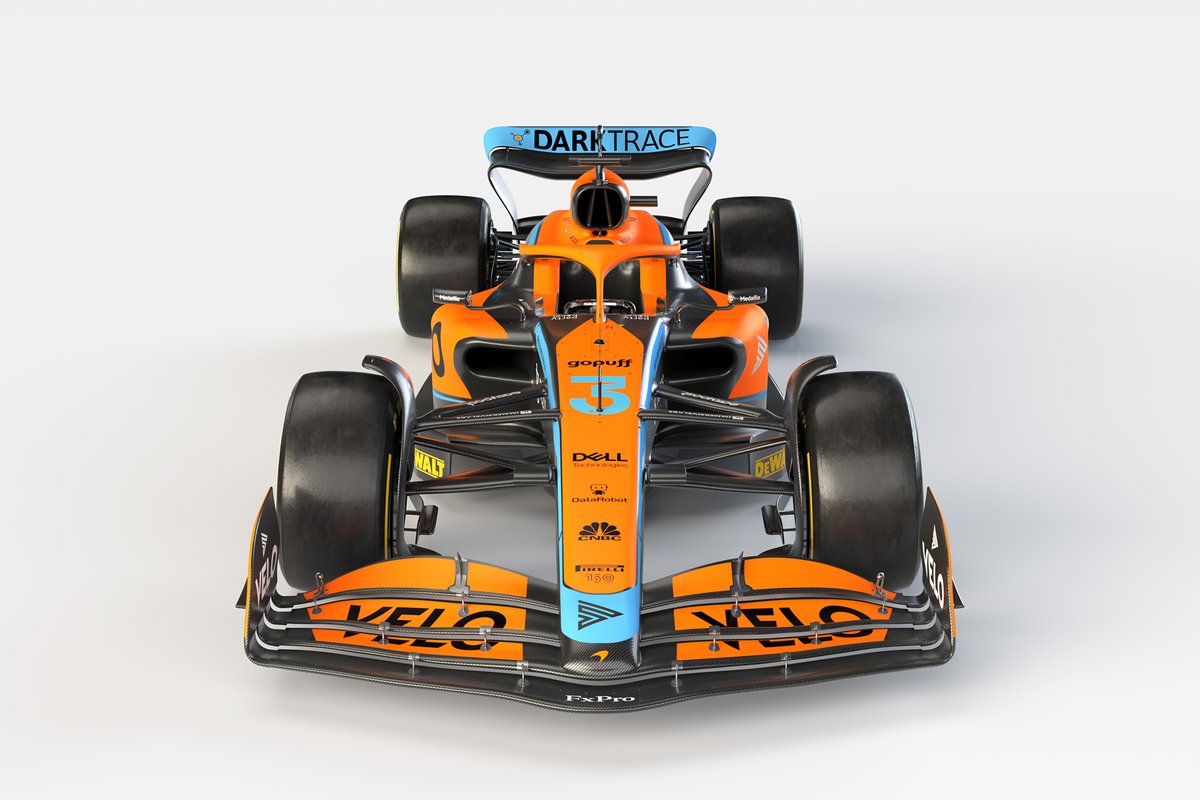 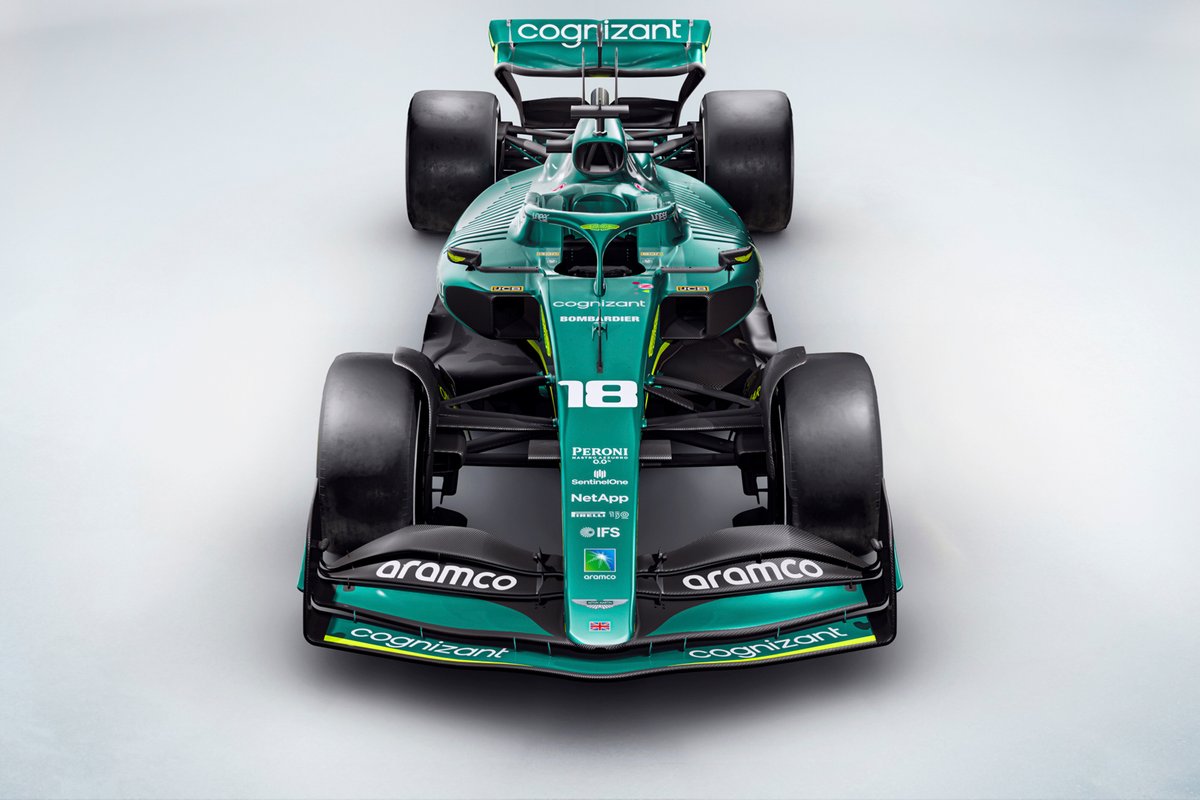 However, Aston Martin and McLaren's front suspension layout choices are diametrically opposed, with the former preferring to stick with the well-known pushrod layout, whereas McLaren has been more adventurous and opted for pullrod. Both options have their pros and cons but, from a driver's perspective, it will probably make little difference.

The front brake duct assembly is another area where F1 has worked hard to reduce throughput, which further limits the team's ability to create outwash and damage the overall intent of the regulation change. This means there's much less of an onus on getting airflow into the assembly and as a general trend we'll see much smaller inlets.

However, both teams have gone about this in different ways, with Aston Martin sporting a slightly smaller sized inlet to what we've become accustomed to - but still large enough that it required the team to tape them over for the shakedown at Silverstone.

PLUS: The big team tightrope that Aston Martin must walk

Meanwhile, McLaren has opted for something very, very small, even though both teams have pushed the brake duct's fence away from the sidewall slightly to help capture some airflow between the two surfaces, while also displacing the wake deflector above slightly.

The teams have opted for very different routes when it comes to the design of the sidepods and the underfloor's tunnel entrance. These are decisions that have also been made in light of their commitment to the car's overall wheelbase and where the front axle has been fixed relative to the forward point on the chassis. The regulations allow some margin in this respect, with the front axle allowed to be positioned no more than 100mm behind the forwardmost section of the chassis.

Looking at the two challengers from above, it's clear that they're at odds in this respect. Aston Martin has chosen to place its front axle behind the chassis line quite a way, while McLaren is behind it but by a much smaller margin. 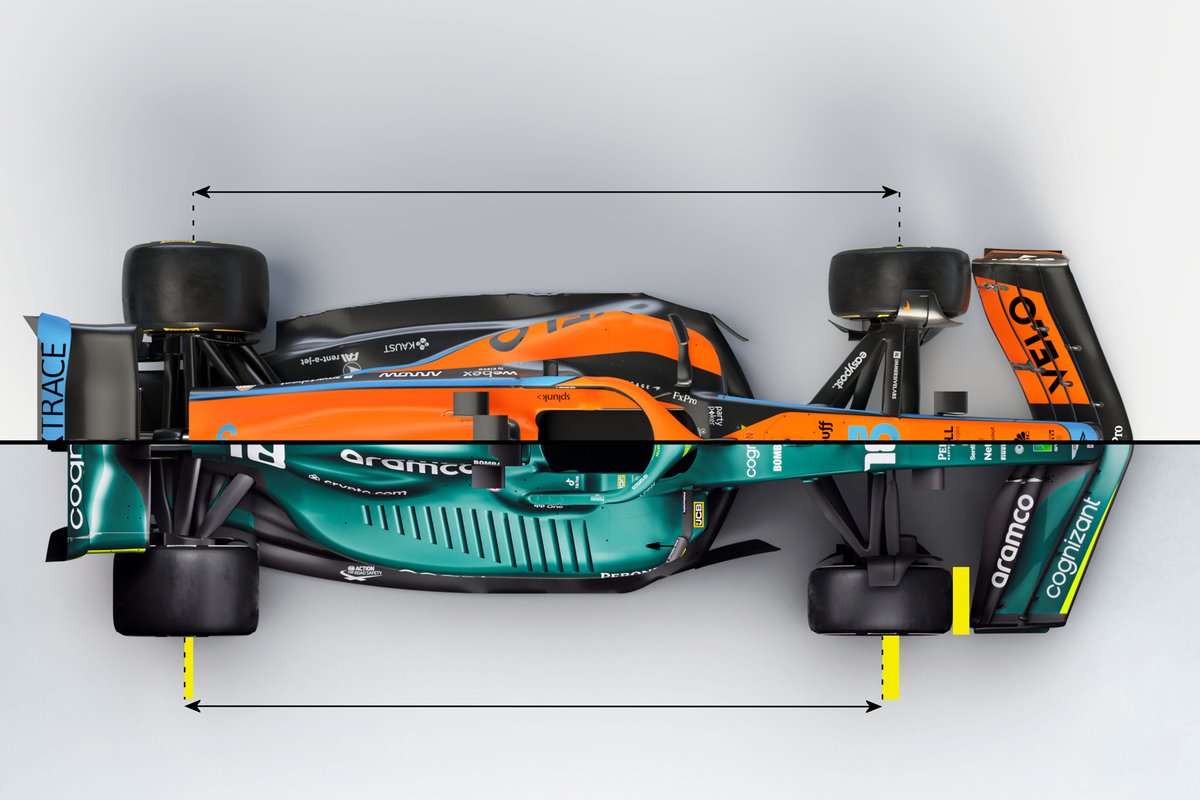 Looking at the forward edge of the sidepods, we can see that McLaren's are positioned further forward. The flow deviators that extend out from the edge of the floor are different lengths and set at conflicting angles too. This only serves to highlight the contrasting behaviour of the airflow as it reaches this region and how the teams are forced to deal with it.

The most distinguishable difference between the two cars for an onlooker is the design of the sidepods, with both making very different choices. These are based on how the teams have packaged their internal components, such as radiators, intercoolers and electronics, whilst taking into account how the airflow from the front of the car needs to be used by this section of bodywork.

The box-like inlet preferred by Aston Martin is set back slightly and downslopes gently into a high waisted sidepod design that has the internal components in a more relaxed position than we've become accustomed to. This creates a significant undercut beneath the sidepod, with the airflow making its way back to a narrow coke bottle region, which is possible owing to the cooling gills on top of the sidepod being responsible for rejecting the heat created within.

Meanwhile, the leading edge of McLaren's sidepod starts further forward when viewed from the top. But the MCL36's sidepods slope downwards from that leading edge and the bottom of the inlet is set further back.

McLaren has opted for a similar overall layout for its sidepods to the one it used during 2021, with the initial bodywork tightened into the coke bottle region. Due to its sidepods being inclined differently, the cooling is achieved by a larger rear cooling outlet relative to Aston Martin. However, much like it did last season, this outlet is raised above the coke bottle line, such that the heat is rejected into a less sensitive region of the car. 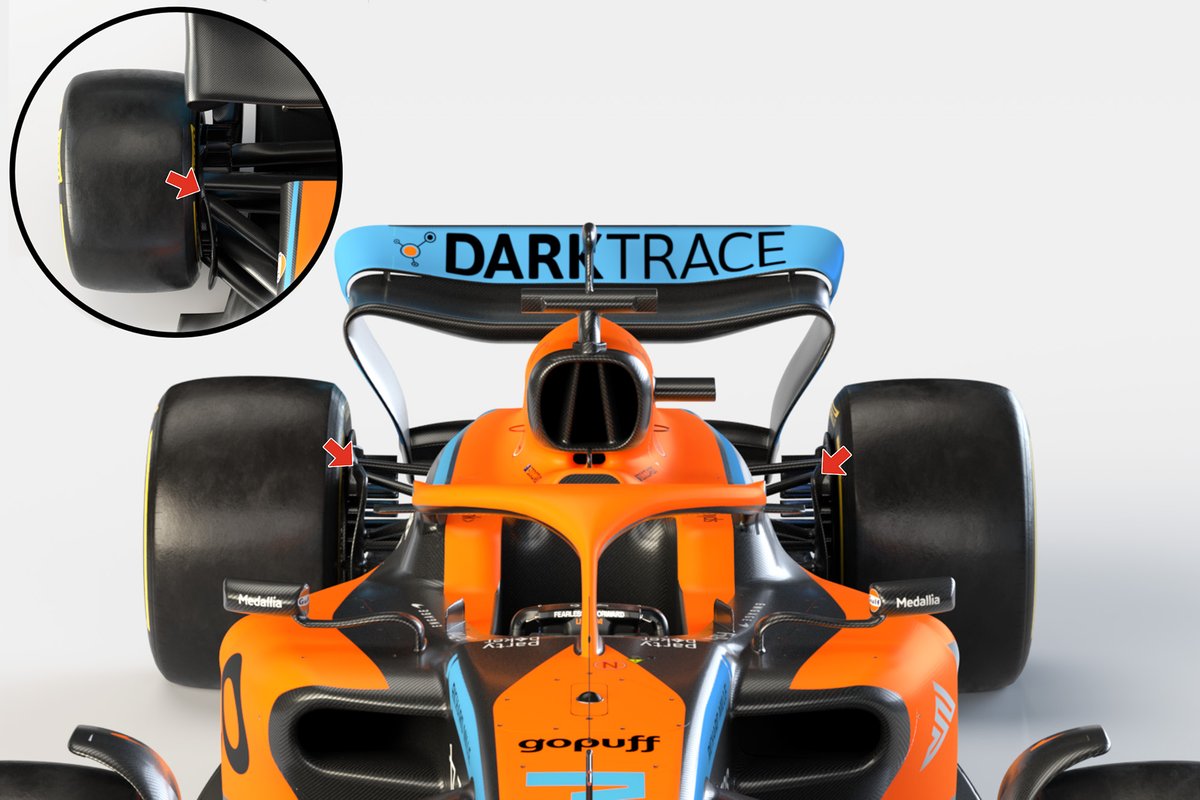 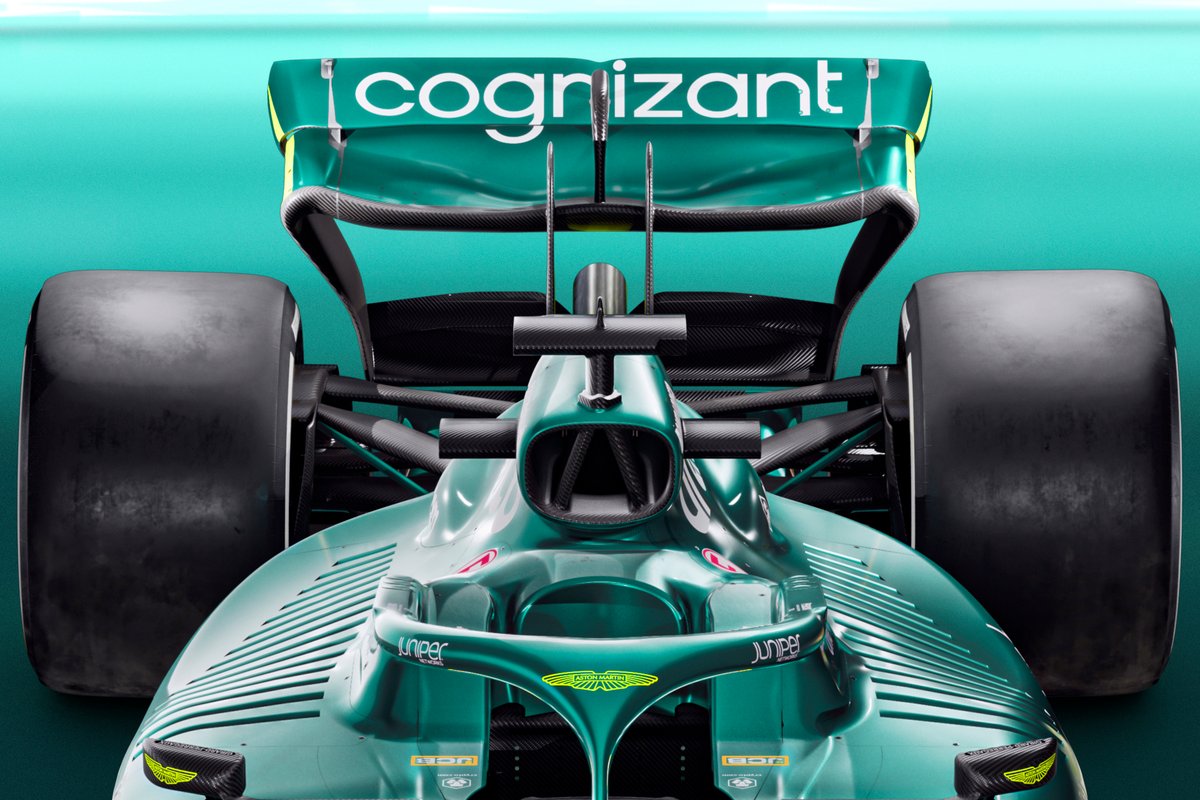 The Haas VF22 isn't relevant to analyse here, as the renders are from an earlier development stage. However, whilst we are assessing sidepod solutions we can also take a look at the AlphaTauri AT03, which shares some qualities with the AMR22.

The front section of the sidepod shares the same box-like inlet design, with the radiators, intercooler and electronics all reclined in much the same way too. This leads to the bodywork being held higher than we’ve become accustomed to, as it looks for the maximum undercut beneath the inlet to provide the airflow with better passage around the sidepod.

However, where the AlphaTauri differs to the Aston Martin is at the rear of the sidepod, where it tapers down to the floor and results in the airflow moving over the top of the sidepod being downwashed into the coke bottle region.

The teams continue to deliver on the differences when we get to the rear of the car too, with McLaren having completed its total suspension overhaul with a pushrod layout being preferred. This is likely a choice driven by a desire to raise the inboard suspension elements out of the way of the diffuser, which is taller and can't start further forward than in previous years.

The upper wishbone also appears to be a multi-link arrangement, with the forward arm mounted lower than the rear one on the upright. This is likely a response to the loss of the upright extensions that the teams have used over the last few years, are outlawed for 2022. These are decisions that McLaren can make despite taking the Mercedes power unit as it continues to design and build its own gearbox and carrier in-house.

Meanwhile, Aston Martin's retention of a pull rod layout suggests that the Mercedes W13 will also feature the arrangement. 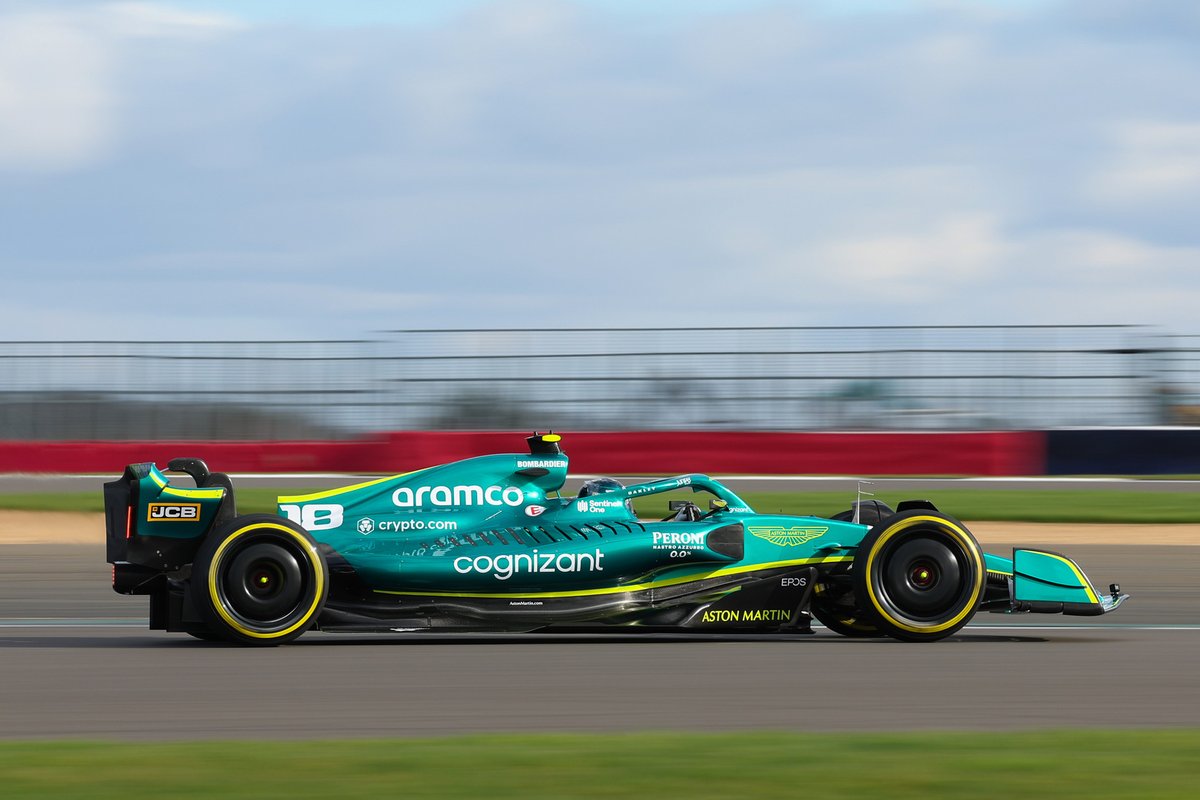 Lastly, the pair have opted for different configurations when it comes to their rear wing mounting pillars, with Aston Martin opting for two, whilst McLaren have just the single pillar in the centre. Once again, this is a trade off between weight and aero, with the single pillar weighing in slightly heavier in order it can deal with the associated loads.

Meanwhile, the double pillar arrangement favoured by Aston Martin will require a slightly different approach in rear wing design to overcome the small aerodynamic losses associated with the extra pillar.

It's fascinating to see how different teams come up with very different design concepts, all within a very tightly controlled set of regulations. And it bodes well for further variation as the other teams reveal their real 2022 challengers over the coming days.