The crash between Lewis Hamilton and Max Verstappen in the British Grand Prix has proved to be one of the most polarising incidents of the 2021 Formula 1 season.

But whether you are in the camp of believing Verstappen could have left more room, Hamilton was fully to blame, or it was just a racing incident, there are some crucial elements that have been overlooked in the fog of a war-of-words.

Like many controversial incidents in top level sport, things are not always as clear cut as they appear at first.

There are grey areas when incidents like this happen, and it's often digging into the detail that offers up the strongest arguments behind what was at play.

The most extreme criticism about Hamilton's behaviour came from the Red Bull camp after the race.

Verstappen himself labelled Hamilton's actions as a "dangerous move" when he tweeted after the race, while Red Bull's motorsport advisor Helmut Marko went even further and labelled the Mercedes driver as being "reckless" and "negligent".

Those comments were in contrast to the calm Mercedes team, which maintained that it felt there was nothing out of the ordinary.

"It is a situation you have all seen in the past when great drivers race each other," said Mercedes boss Toto Wolff.

"When nobody is prepared to give in, then this kind of situation can happen. But for me, it takes two to tango."

One thing important to understand is that, despite the FIA stewards handing Hamilton a 10-second time penalty for his part in the collision, they did not rule him to be entirely to blame for the accident.

The official stewards' statements are always written in a very particular manner, and they were clear this time that Hamilton was judged to be 'predominantly' at fault.

As a comparison, when George Russell was handed a three-place grid penalty for his clash with Carlos Sainz Jr in the sprint race, the stewards were explicit that he was fully to blame.

In that verdict, they wrote: "Car 63 is judged at fault for the incident." 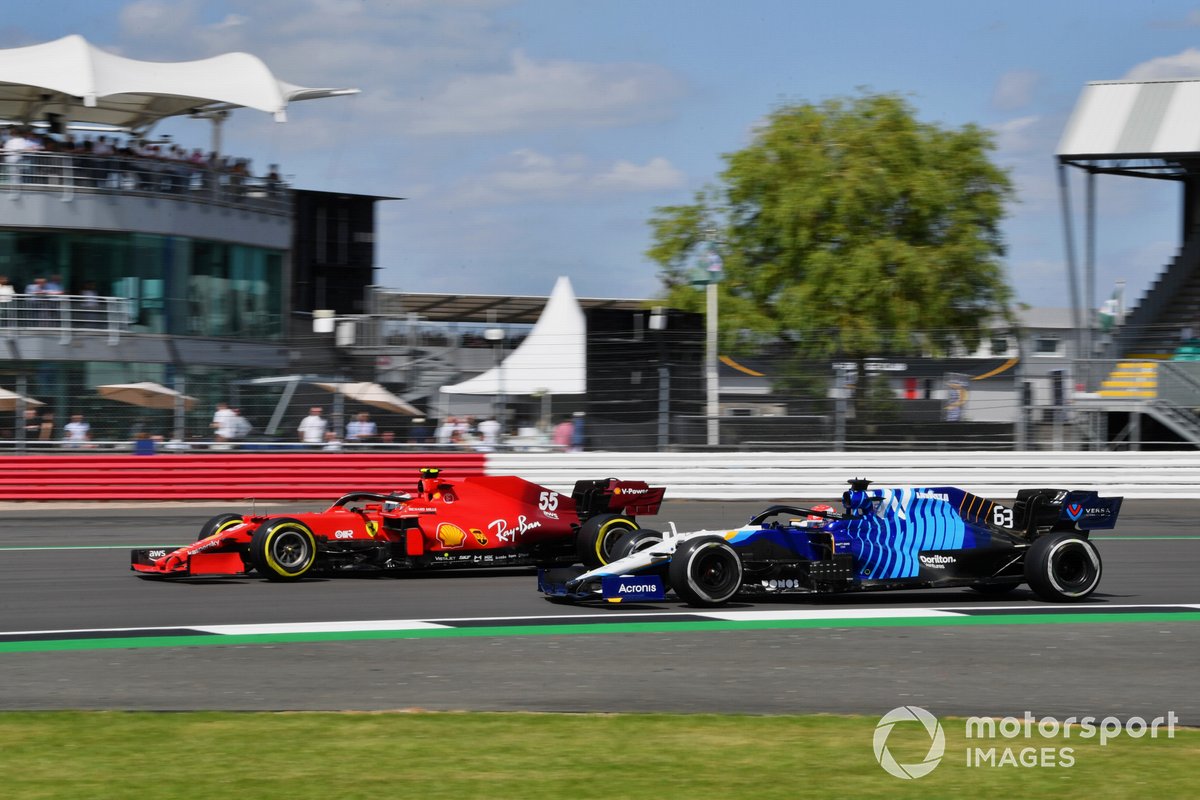 But whether the predominant means the stewards felt Hamilton was 51% to blame, 60% to blame or 90% to blame, we will never know.

A lot has been made too of the fact that Hamilton was not fully alongside Verstappen at the turn in point, which has prompted some to suggest he had zero rights to the corner.

This was something that Red Bull team boss Christian Horner was quick to point out in the radio messages to F1 race director Michael Masi.

"That corner, he was never anywhere near alongside," said Horner to Masi.

There have subsequently been a lot of screen grabs of the Verstappen/Hamilton onboards showing indeed that the Mercedes was at no point fully alongside the Red Bull.

These all back up the view that Verstappen had every right to the corner so any collision was at the door of the other driver.

But, what's crucial to understand when it comes to defining the right of corners, is that a driver on the inside does not necessarily need to be fully alongside.

For, when it comes to attempting a pass down the inside, a driver is believed to only need to be 'significantly' alongside ahead of the corner to lay claim to be given room.

This is something that Mercedes has made reference to, and it is understood to have been part of the communication that Wolff emailed to Masi and gave to the stewards during their investigation into the crash.

While there are no officially published rules that tell the public exactly at what point a driver trying to overtake a rival must be given room, there are guidelines given to stewards about this.

While these are not in the wider domain, it is understood that they indicate a driver passing on the inside does have a right to the corner – as long as he gets through it 'cleanly' - if there is 'significant overlap' with the car ahead.

As a contrast, the guidelines say that if a driver is attempting to overtake around the outside on the approach a corner, then he needs to be at least fully alongside to have a right to the track.

This was the basis of Lando Norris being given a penalty at the Austrian Grand Prix when Sergio Perez had pulled fully alongside him on the outside on the entry to Turn 4.

The basic gist of the criteria on when a passing car can lay claim to a corner can be seen here as an example of how it would work on the entry to Copse. 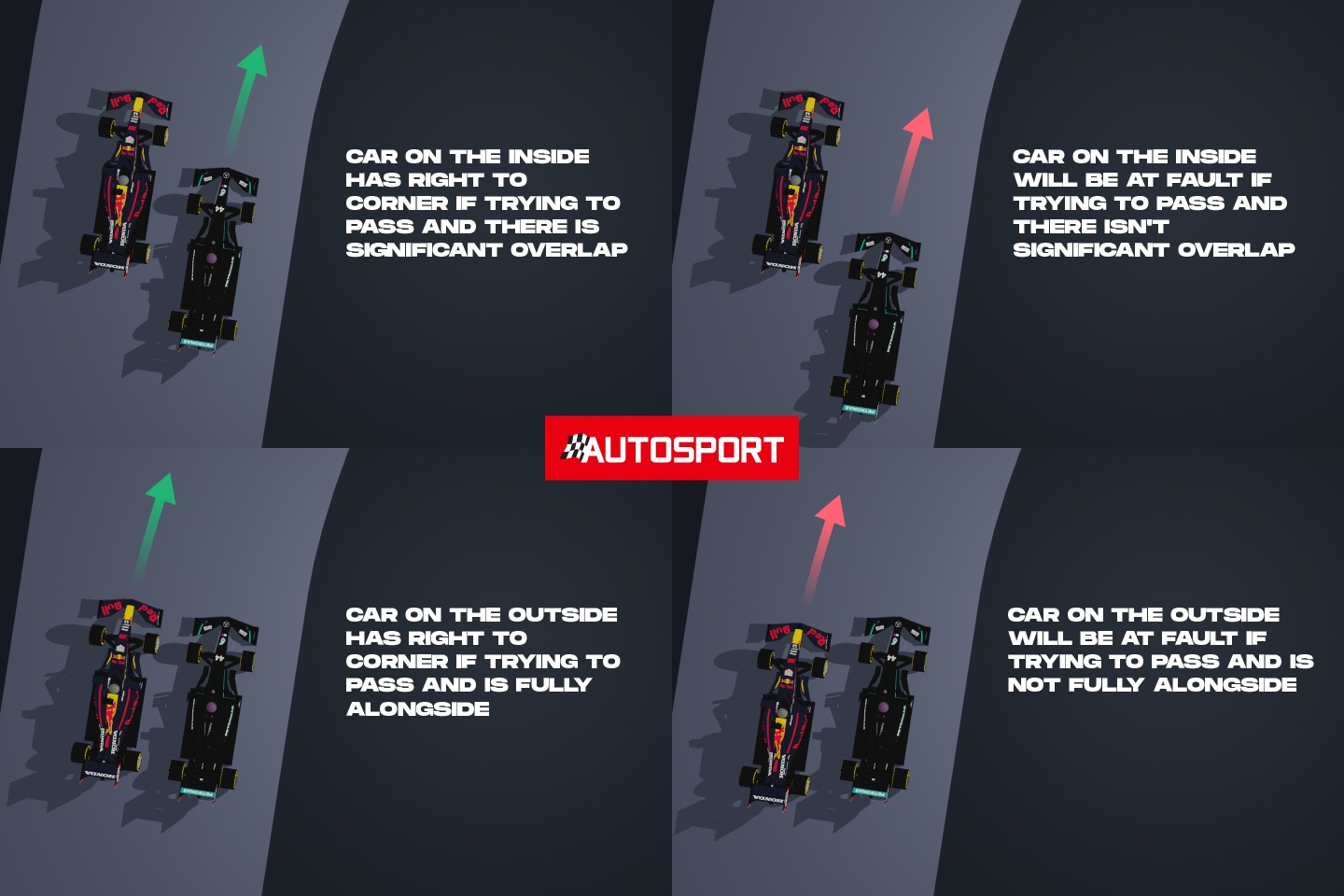 Mercedes' trackside engineering director Andrew Shovlin made clear reference to these guidelines being in a document when he explained why Mercedes felt Hamilton's penalty was not justified.

"If you look at the guide that the stewards have to determine who's at fault in terms of overtaking, Lewis was sufficiently alongside and we felt Max should've given him racing room," he said.

"If you look at the sprint race, if you look at the opening lap of the main race, Lewis was constantly having to back out of it to avoid a collision, and he was able to put his car into a position where he could stand his ground.

"Max drives aggressively and it's inevitable that, one day, we're going to get an accident. But we we're pleased with the job Lewis did, and slightly disappointed to get the penalty, but just relieved we could still win the race."

PLUS: The off-track considerations that led to F1’s Hamilton/Verstappen Silverstone shunt

Of course the stipulation about what is actual 'significant overlap' remains open to debate.

However, there can be little doubt that at the maximum point Hamilton got alongside Verstappen on the run to Copse – which was his front wing being level with the Red Bull's front wheels – that must surely be viewed as significant.

But equally, having such a 'significant overlap' does not give the driver carte blanche to do what he wants in the corner ahead.

The guidelines suggest that the driver still needs to 'make the corner cleanly', something which the stewards felt that Hamilton did not do.

By running slightly away from the apex, and carrying too much speed that washed him out in to the path Verstappen was taking, it was felt that Hamilton had missed an opportunity to avoid the crash.

The argument about hugging the apex was further enhanced later in the race when Hamilton tucked in much nearer to the inside kerb when he pulled off his race-winning move past Charles Leclerc.

As Masi said: "The big part was similar to what happened with Charles later on, that he could have, say, tucked in closer to the apex.

"And that was where they found that, and I think the wording was quite clear as per the regulations, that he was predominantly to blame.

"He wasn't seen as wholly to blame for it, but seen as predominantly to blame, that he could have tucked in further."

Digging deep into the FIA interpretations, it is clear that neither Hamilton nor Verstappen were completely innocent nor was one of them entirely to blame.

And in any such accident where there is some shared blame, it means the divided opinion we've seen since the race is unlikely ever to reach consensus.