Formula 1's technical and financial future must be conceived without input from the teams because getting their agreement is "impossible", according to Red Bull's Christian Horner

Discussions are ongoing over F1's next major set of technical regulations, due to be introduced in 2021, plus how to reduce the cost of competing and the distribution of F1's funds between the 10 teams.

A press conference on Friday between Horner, Ferrari boss Maurizio Arrivabene and Mercedes chief Toto Wolff descended into a war of words over Ferrari's signing of FIA employee Laurent Mekies and the supposed violation of a 'gentleman's agreement' formed in the latest Strategy Group meeting.

Horner said this proved teams could not be trusted to reach a consensus and urged F1's owner Liberty Media and governing body the FIA to propose a comprehensive framework for F1's crucial next direction that teams would simply be able to "sign up to or not".

"My view on this is very simple: trying to get a consensus between teams that have got varying objectives and set-ups is going to be impossible," he said.

"Of course there will be a lot of positioning. The media will be used.

"It's history repeating itself. It happens every five or six years, every time the Concorde Agreement comes up for renewal.

"My feeling is Liberty, together with the FIA, need to get on the same page and say 'this is what we want Formula 1 to be, this is the financial distribution surrounding it, here's the deal' and lay it out to the teams." 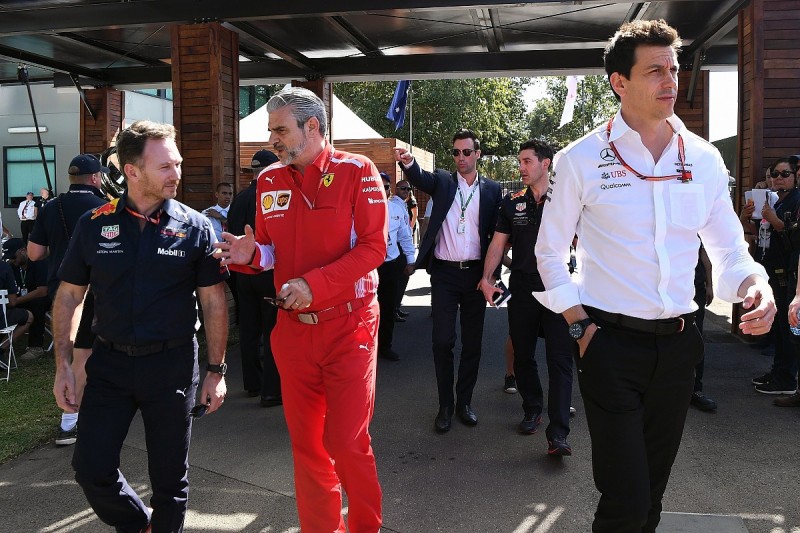 Mercedes, Ferrari, Red Bull, Force India, Williams and McLaren all have a vote in Strategy Group meetings that discuss rule changes and other suggestions.

The remaining teams are then able to discuss approved plans in the F1 Commission before the FIA's World Motor Sport Council rules on final proposals.

Wolff said "it is clear that the current governance and how the rules are being made is not very functional" and that the Mekies argument in the pre-Australian Grand Prix press conference showed F1 needs "tight rules".

"There is too much different opinions and agendas on the table and we need to sort it for 2021 for the best interests of the sport," he added.

Talk of a possible breakaway series has been revived recently in the wake of Ferrari chairman Sergio Marchionne's 2017 threat to quit F1 over regulations not in the "DNA" of grand prix racing.

Arrivabene said he would not comment on Marchionne's position, other than to urge people to "please take him seriously", but Wolff said teams needed to show unity.

Asked about the practicality of a breakaway, Wolff said it was "more about responsibility".

"Comments that are being made, maybe from Mr Marchionne's side, it's also because he cares I guess," said Wolff.

"I can assure that whatever is being written we carry a lot of responsibility.

"We need to give our input, support it in the best possible way, so it's great and we're not devaluing it."