Haas Formula 1 boss Gunther Steiner says Kevin Magnussen’s shock pole for the Brazilian Grand Prix was not down to luck and is “well deserved” after producing a “perfect” lap.

Magnussen scored the first pole position of his F1 career at Interlagos on Friday after making the most of his track position advantage at the start of Q3 in damp conditions.

Magnussen’s early lap time put him on provisional pole, two tenths of a second clear of Red Bull’s Max Verstappen, after getting to the front of the queue to exit the pits before the expected rain hit the track.

A red flag following George Russell’s spin into the gravel meant that by the time the session resumed, the rain had intensified and meant no one could beat Magnussen’s effort.

It sparked wild celebrations for Magnussen and Haas, the team celebrating its first pole since joining the F1 grid back in 2016.

Haas team principal Steiner said on Sky Sports after qualifying that it ranked “number one” among his career moments, saying he had been “scared to dream” of such an achievement.

“We are trying hard, the whole team has been trying hard for seven years, and then circumstances let us pull this one off,” said Steiner.

“But I think it was not luck. It was well deserved, from the driver, from the team being on the right tyres at the right time, Kevin putting a lap down when it was needed.

“You need to go out there, he was first out there. You can say yeah, he had an advantage, but [as] a disadvantage, he had nobody to gauge with. He was on his own. He put a lap down, and it stuck. 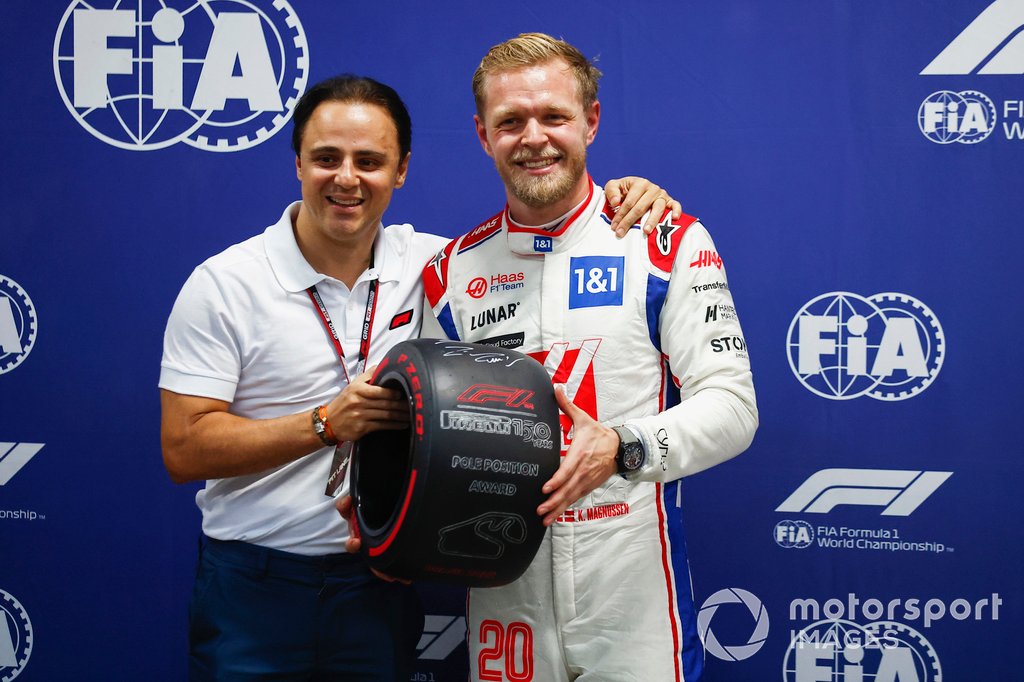 “When it rains soup, you need to have a spoon! And we had a spoon ready today!”

Steiner said Magnussen put “just a perfect lap down” in the conditions on slick tyres, having known it was key to get into the pit lane early before the session went green.

“A credit to him, he was given the opportunity and he took it.”

The result comes on Magnussen’s 100th grand prix weekend for Haas, completing a dramatic turnaround since the start of the year when he was planning to race in sportscars, only to be drafted in as a replacement for Nikita Mazepin on the eve of the new season.

“He deserves a lot, the whole team deserves it,” Steiner added.

“We always work hard, we never give up, we keep on fighting, and you will always have naysayers. But welcome to our pole position, naysayers!”