Gunther Steiner says that Haas’s crashes are becoming “too frequent and too heavy” after another incident involving Mick Schumacher in final Formula 1 practice for the Hungarian Grand Prix.

Schumacher crashed heavily at Turn 11 during FP3 at the Hungaroring, leaving his Haas VF-21 car with significant damage that meant he ultimately took no part in qualifying.

It marked the second time Schumacher has missed qualifying this year after a crash in FP3, following an accident in Monaco at the end of May.

Schumacher also crashed in the opening part of qualifying for the French Grand Prix, meaning he could take no part in Q2 after securing the team’s best Saturday result of the year.

While Haas F1 team boss Steiner said there always had to be some “plan” for mistakes to happen with rookie drivers, he felt the team had “reached a point” where it had to minimise accidents for the rest of the season given the financial impact.

“Mick in the last five races had quite a few big ones,” Steiner said.

“If you have a spin or something like this, that happens. But these accidents are quite heavy. It's a lot of money, and for no good reason.

“So we have to work on it, to get better on that one. And, obviously, the budget is the budget, and you need to stick to it. You always have to have ideas how to get around it, when you have these accidents.

“At the moment, obviously we feel it, but we can still deal with it. But soon we will be in a position where it's like, yeah, we need to find new ways to overcome this. Because they're getting a little bit too frequent and too heavy.” 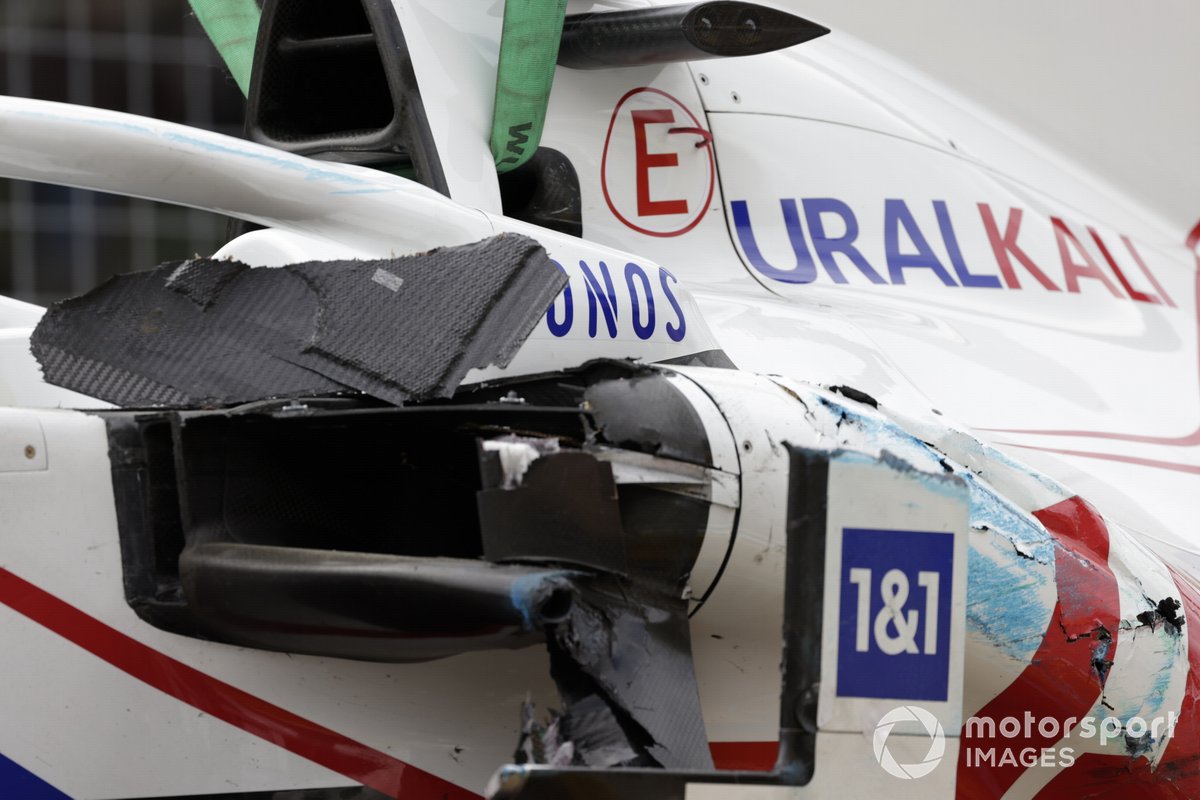 Damage to the car of Mick Schumacher, Haas VF-21

Schumacher’s team-mate, Nikita Mazepin, had a handful of incidents at the start of the year, but Steiner moved to credit the Russian for not making mistakes in recent races.

“We make too many mistakes, that is the problem - or I would say, in defence of Nikita, I shouldn't use the plural, because in the last races he behaved very well,” Steiner said.

“He did very well. He didn't do any damage or anything. And Mick, just the last races, we had some accidents, which we need to get better at.”

Steiner felt he needed to explain the balance of risk and reward on offer when chasing lap time, particularly in a practice session that doesn’t impact the end result in qualifying.

“From our side, we just have to make plans how we spend our money,” Steiner said.

“We know exactly what we are doing on parts and this, but to deal with the drivers, it’s mainly just maybe sitting down and explain the big picture again, that sometimes you need to take risk, but you take risk if there is opportunity.

“If there is no opportunity, I never take risks personally, because there's nothing to be gained.

“And I think at the moment, we know that there is not a lot to be gained, especially not in FP3, and we shouldn't take this risk in FP3.”