Lewis Hamilton topped the second practice session for Formula 1’s 2021 Spanish Grand Prix ahead of Valtteri Bottas, with Max Verstappen well down the order after aborting his qualifying simulation.

In conditions that were hotter and windier than Friday’s earlier FP1 session, the second 60-minute practice running was initially led by Alfa Romeo’s Antonio Giovinazzi.

But Giovinazzi’s leading time from the first minutes was soon beaten by a flurry of fast times, as Esteban Ocon moved ahead with a 1m20.303s and Bottas’s 1m19.087s.

Bottas went fastest again on a 1m18.419s after a couple of slower tours, with Hamilton trailing his team-mate by 0.042s and Verstappen 0.366s slower after his fastest lap on the mediums.

The session was interrupted at the 10-minute mark, when the virtual safety car was activated so a piece of bodywork – that had flown off Carlos Sainz Jr’s car after he had run heavily over the Turn 9 exit kerbs leading on the back straight – could be cleared by a marshal.

A brief lull in action followed as most of the pack returned to the pits ahead of the qualifying simulation runs on the soft tyres.

The Mercedes drivers led the pack out on the softest compound, with Bottas running ahead of Hamilton.

Both cars were slower than they had been on mediums in the opening sector, but gained time significantly as their laps wore on to both improve.

Bottas’s 1m18.309s put him further ahead at the top of the times, but not for long as Hamilton completed his lap with the then fastest time in the final sector to go quickest on a 1m18.170s.

As he continued to lap on the same soft tyres for a run before the long-run data gathering period in the session’s second half kicked off, Bottas was informed that Hamilton had been running in a different engine mode, which Mercedes said was had a 0.1s difference – the time between them being 0.139s. 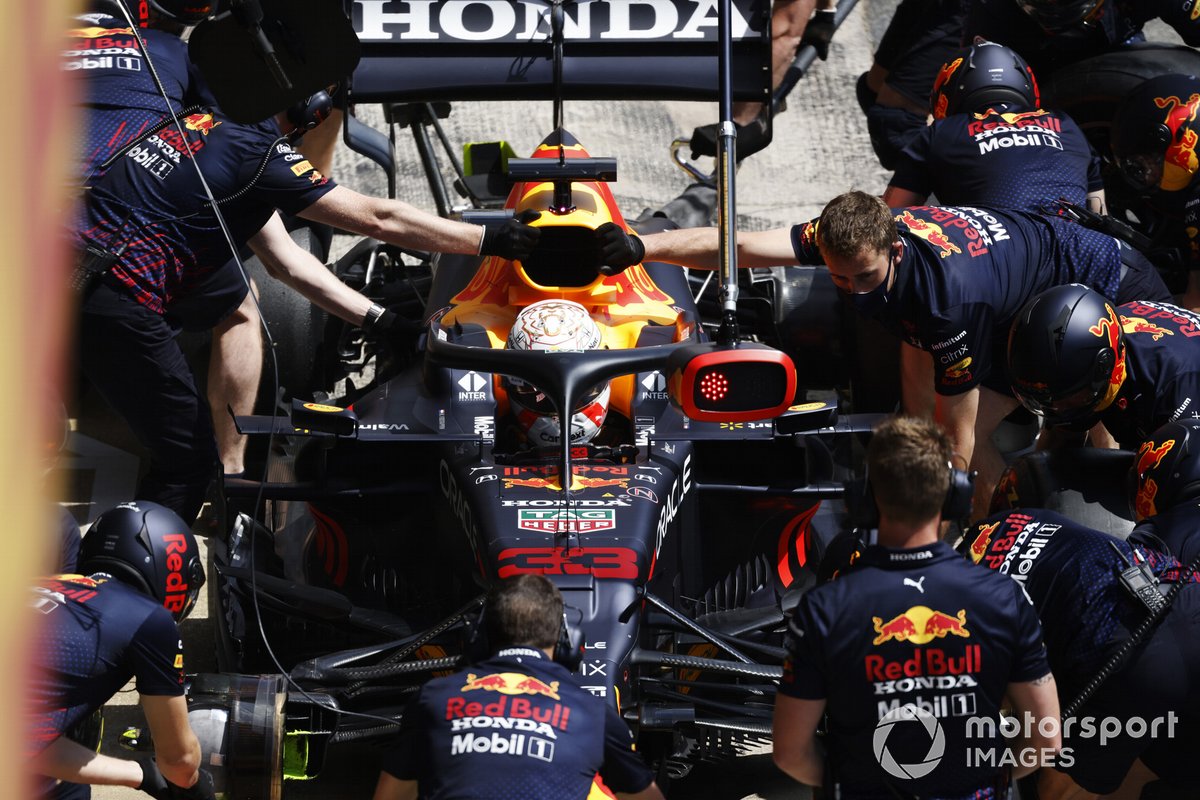 Verstappen’s flying lap on the softs came a few minutes after the Mercedes cars, as has become the norm in the shortened FP2 action, and he had to contend with significantly more traffic.

The Dutchman was just over 0.1s slower than Hamilton in the first sector and lost just a fraction more in the second, but then had to catch a wild moment going deep into the reprofiled Turn 10.

Verstappen had to go completely off the track catching his RB16B and quickly backed off in the following turns.

He continued to lap on the softs, but did not go quicker than he had on the mediums, before switching to his race preparation running.

Verstappen’s absence from the leading times left a spot that Charles Leclerc slotted his Ferrari into – finishing an encouraging 0.165s slower than Hamilton with the session’s fastest time in the third sector.

Ocon led his Alpine team-mate Fernando Alonso in fourth and fifth, with Pierre Gasly then finishing ahead of Yuki Tsunoda in the second AlphaTauri.

Sainz was eighth for Ferrari, with Verstappen’s medium tyre best time putting him ninth, ahead of team-mate Sergio Perez, who did complete his soft tyre flyer but wound up 0.748s slower than Hamilton’s best time.

Verstappen finished the session with the right-side footplate of his front wing hanging off, picking up the damage running over the kerbs at the uphill right of Turn 8 in the final few laps after he had completed a pitstop at the end of his race simulation.

Austrian Grand Prix: Tickets, the best grandstands, where to stay and how to get there