Elite sport is all about finding marginal gains and Formula 1 is the ultimate expression of this.

“Everyone wants to find that edge in any way in the sport. When you are dealing with hundredths of milliseconds, you look for any advantage you can to help you go faster,” says Ed Green, Head of Commercial Technology for McLaren F1 team.

Every area of race operations activity is scrutinised to try to find a competitive advantage, from front jacks that shave milliseconds off a pitstop, to new communication methods. Increasingly F1 teams are turning to technology partners to give them new tools. One area where a lot of effort is being focussed by McLaren is the future of race operations, in particular high-speed connectivity and the internet of things.

“In Singapore, from the data leaving the car to arriving in McLaren Mission Control [in Woking] was 181 milliseconds. In the Netherlands, a bit closer to home, it was 18 milliseconds,” says Green. “Although that doesn't sound like a lot in any other world, in Formula 1 that’s a huge difference and equates to a huge distance to track.

“Often, a lot of what we do is think about if we're 181 milliseconds behind, how can we adjust our timing systems back at Mission Control so we are playing at the same speed as we would be at the track. Often we adjust latencies. The highest we see could be close to 400 milliseconds in Australia, but a lot of time is spent thinking about how we can get that lower and where we can break it down. In the garage the transfer time is less than 8 milliseconds.”

The reason this matters is because F1 teams carry out more critical operations remotely during race weekends from their team factories than ever before. The trend started a decade ago with the advent of high-speed connectivity using fibre optic. F1 rules restricting the number of team personnel permitted to travel and the desire to reduce CO2 emissions from flying people and freight increased the importance of finding high-speed connectivity solutions to allow more staff back in the factory to contribute to the race effort; car engineering during the practice and qualifying sessions and then race strategy decision-making during the grand prix on Sunday. 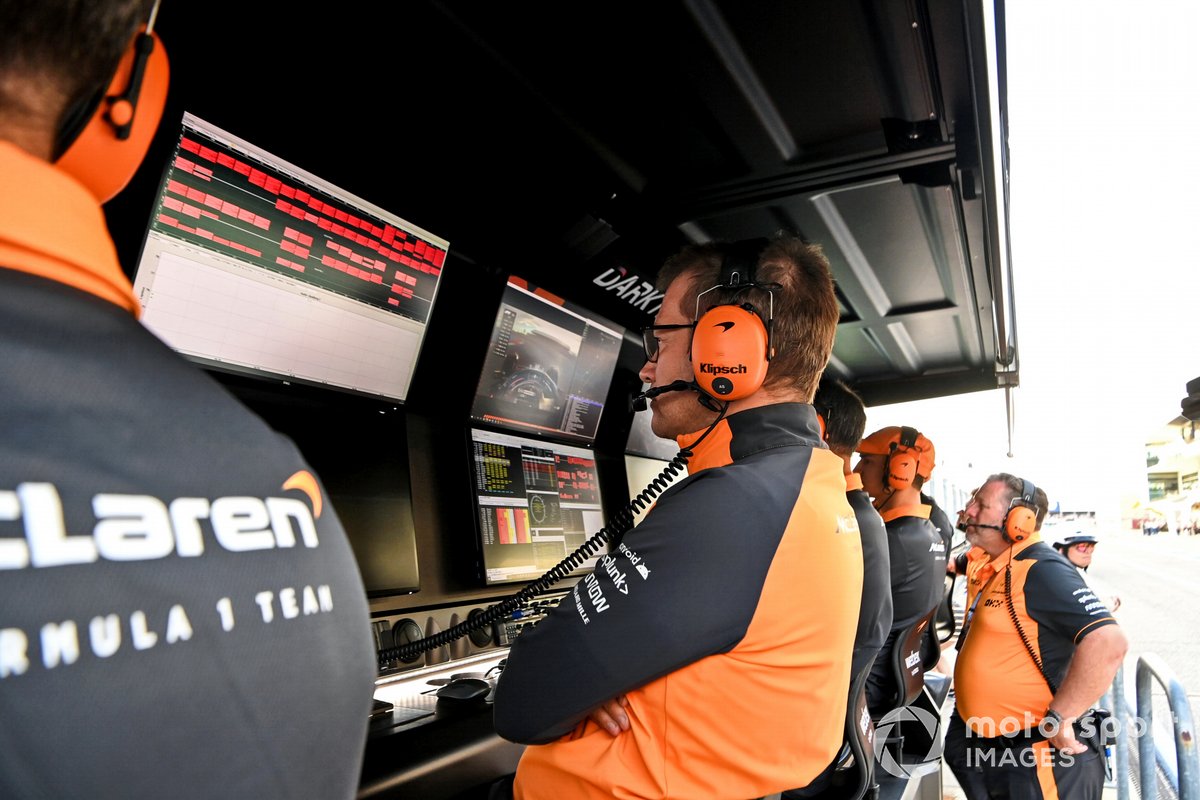 McLaren has around 40 people operating in the Mission Control back at Woking and one of the marginal gains benefiting their operations is noise cancelling, which means that the working environments for staff at the race track and in Mission Control are the same. “We use AI technology in Webex to filter out background noise,” says Chintan Patel, Chief Technology Officer for Cisco UK and Ireland. “For McLaren it became very clear that noise cancellation technology could filter out all of that background distraction, meaning the team members could hear each other irrespective of where they work. Creating that kind of consistent experience, that was a real game changer. Now, an everyday normal user will see those options and that’s been driven by the development being done with McLaren. We know that 98% of meetings going forward will have one person at least who will be remote in some way.

“The capability is within the platform and all of this really allowed McLaren to perform mission critical work, irrespective of where the team worked, and make sure they kept improving the team’s performance at every Formula One race, and everyone didn’t need to physically be there because the quality was so good it didn’t always need to be in person. It did save time, it saved money, you didn’t have to get on planes, you just log on a minute before you need to and you’re off.”

Another area where race operations will improve significantly in the coming years is Wi-Fi connectivity at the race track. Whilst engineers tend to be wired in for telemetry, people roaming around the garage are operating on Wi-Fi. The same is true in Paddock Club and team hospitality. Thanks to their partnership, McLaren is exploring an upgrade Cisco’s newest generation of wireless connectivity, Wi-Fi 6E, which offers double the speeds of the system they currently operate, and would allow staff to move around more in the garage and at the circuit, doing higher throughput tasks, collaborating in different ways, without having to be wired in. It would mean more reliable, more secure, faster connectivity, especially in remote locations.

“It’s about anything that can be connected, being connected; the Internet of Things,” says Patel. “More and more things are being connected from a trackside perspective, so they can be tracked where they are, these are high value products, high value tools. There is a huge amount of telemetry coming off all of these components, whether they're in the car, in the pit or even the people themselves. Sensors are being put on all sorts of things.” 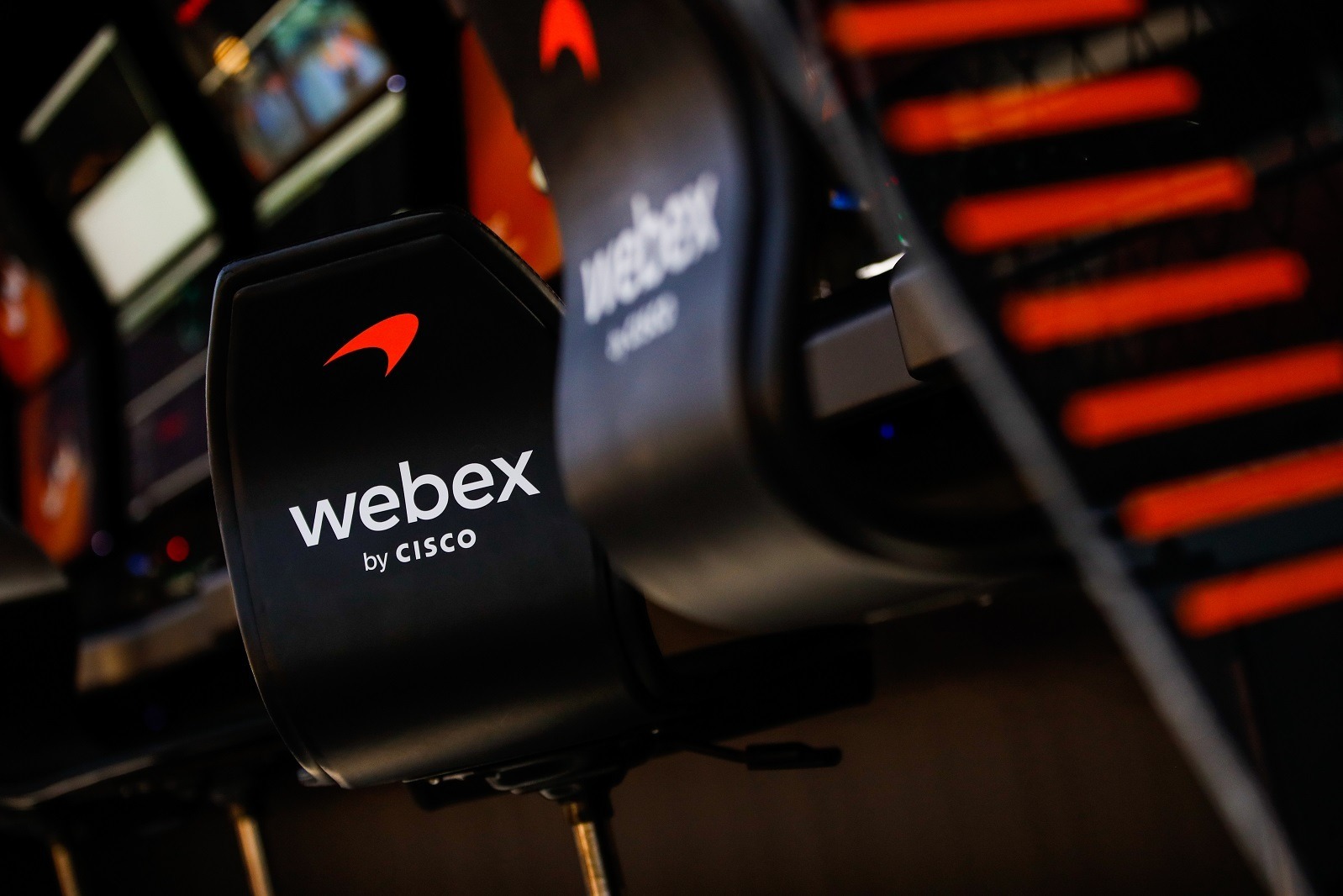 Looking further down the road the possibility opens up of using Webex Hologram, a holographic photo realistic technology. It’s easy to see how this could be appealing from a fan engagement point of view, for fans to be able to engage with a hologram of Lando Norris. But there are many possibilities to improve race operations too. It could allow the McLaren team at the racetrack to interact with remote engineers, production staff, agree with new changes.

“We did a demo and the person appeared as if he was sat on the opposite side of the table to me,” says Green. “It was surreal. He reached out to fist bump and it felt weird that he wasn't there!

“It didn't feel like a gimmick, it felt like a step forward. I could well imagine that on a race weekend, when we're rapidly prototyping parts for the car, or even to see the aero flow-vis over the car as it comes back in, those sort of things could be really interesting.”