Reigning Formula 1 champion Vettel found himself leading for the first time in 2014 when Hamilton failed to extend enough of an advantage over the Red Bull before making his third pitstop on a night when most stuck with two tyre changes after a mid-race safety car skewed strategies.

But Vettel was only in front for a lap before Hamilton managed to pass him.

The Mercedes squeezed past the Red Bull on the inside at the fast Turn 6 kink early in the DRS zone, which left Vettel puzzled.

"With the overtaking move I wasn't sure what he was doing," said the German.

"I gave him all the space to pass me on the inside of next corner but it seemed he couldn't wait to get back in the lead.

"I had to back off and let him through.

"There was no point fighting. To finish P2 was the best we could do.

"We had the oldest set of tyres in the last stint so it was quite tricky managing those with not much tread left."

Hamilton admitted that his pass had been ambitious.

"I had a tight gap," he said. "Maybe I should have overtaken him somewhere else, but fortunately Seb was very fair." 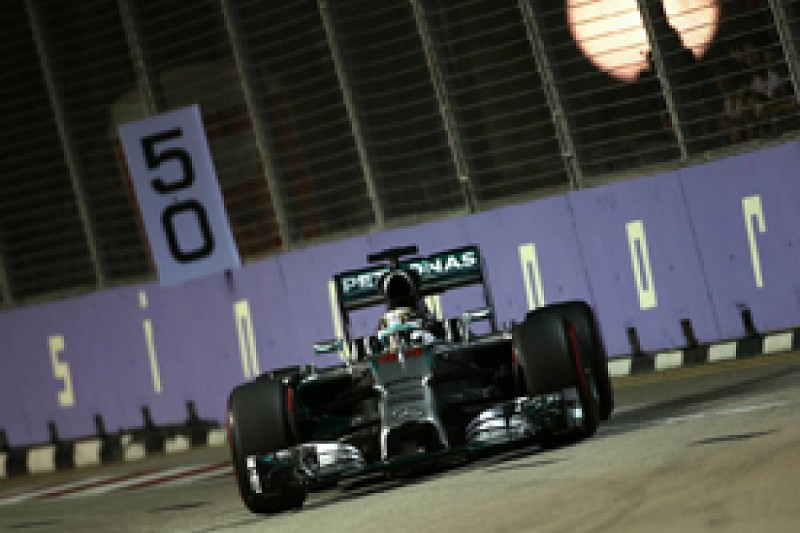 New championship leader Hamilton said the penultimate stint had been confusing as he tried to both pull sufficiently clear of the Red Bulls for a pitstop and not destroy his existing tyres.

"I was a bit unaware of what I needed to do," said Hamilton.

"I had extended the stint as long as I could and they said 'we need 27 seconds'.

"The safety car had caused me big problems. Fortunately we got to where I needed to go."

Vettel had also been dubious about his strategy of running his third set of tyres to the finish, though he understood why Red Bull did not want him to pit again after the safety car had closed the pack up.

"It was not ideal in terms of timing with the safety car," said Vettel.

"We'd lost position to Fernando [Alonso] as we stopped late. We went on primes [softs] and hoped for no safety car, and then it came out.

"At the restart we knew it was difficult - probably impossible - to make up 27s [for a pitstop] on older tyres with everyone behind.

"To get the best result, we knew we had to get to the end [on those tyres].

"I wasn't confident we could do it because of the wear we had on the sets before."