Rosberg very briefly led eventual winner Sebastian Vettel having jumped him at the start but spent the first part of the race in second after being repassed into Turn 3.

Both he and team-mate Hamilton stayed out during a mid-race safety car period caused by Daniel Ricciardo's stricken Toro Rosso, which dropped them out of the top 10 when they subsequently pitted.

Though they battled back to finish fourth and fifth, neither driver was happy with the end result.

"I don't think we can come away from this weekend satisfied," said Hamilton, who thought he was battling for third after a problem reading his pitboard.

"I'm disappointed with the result we got considering how much we were pushing. Perhaps the strategy wasn't as good as we hoped."

Rosberg was similarly downbeat and expressed concern over the number of mistakes that he felt hampered his chances of finishing on the podium.

"I'm sure we didn't get the most out of it today, there were many bits and pieces," he added.

"I don't know if we should have just taken the risk and stayed out with the safety car. Could we have managed that? I'm not sure.

"I had a slow stop and lost a place to [Mark] Webber, and then I got rubber in my front wing. It was just a difficult race from the safety car onwards. 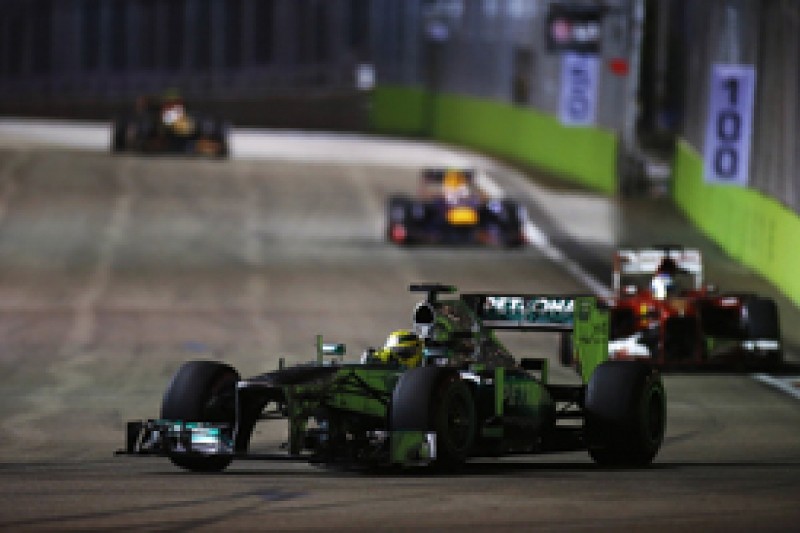 "There were a lot of different strategies out there and it's likely we could have done better.

"I don't know if it could have been a lot better or a little bit so I'm not sure but it didn't go ideally that's for sure and we need to learn from it and try and do better."

With Vettel now 96 points clear of Hamilton in the drivers' championship the Briton is now focused on helping his team beating Ferrari in the constructors' standings, where Mercedes trails its Italian rival by seven points.

"I would say that's gone out the window," he said regarding any lingering drivers' title ambitions. "I can just try to catch Fernando [Alonso] somehow, and help [the team] beat Ferrari."

Singapore GP: Fernando Alonso says Ferrari had 'nothing to lose'