Like others, Schumacher did a practice start from the grid after the chequered flag at the end of first practice, but lost control of his Haas going through Turn 7 as he made his way back to the pits.

Schumacher wiped both corners off the front of the car and had to sit out FP2 while his team made a precautionary chassis change for the remainder of the weekend so it can properly investigate the crash damage.

The German - who hasn't raced at Suzuka before - complained on the radio after the crash that he suffered "huge aquaplaning", with Schumacher later explaining that he was caught out by the spray of a car ahead of him.

"For sure it wasn't great that we lost a lot of temperature from the practice start side,” he said when asked by Autosport if his tyres cooling off had been played a part.

"But it was I think more from the fact that we had a car ahead which threw up a lot of spray, hence we didn't really see much of where to put the car.

"And on top of that we were in a mode which we tried to learn as much as we can from to be able to have all the right settings for the race.

"You're trying to figure out the track itself, obviously my first time here, trying to see where the puddles are, because that's something that is very different on every place you go to.

"And unfortunately here the water seems to accumulate quite a bit at certain areas. It's just a matter of understanding that.

"I mean, had it happened two metres later I probably would just had a 360 spin and kept going. But things happen for a reason. And I don't know what the reason behind it is now, but maybe in 10 years’ time I will!" 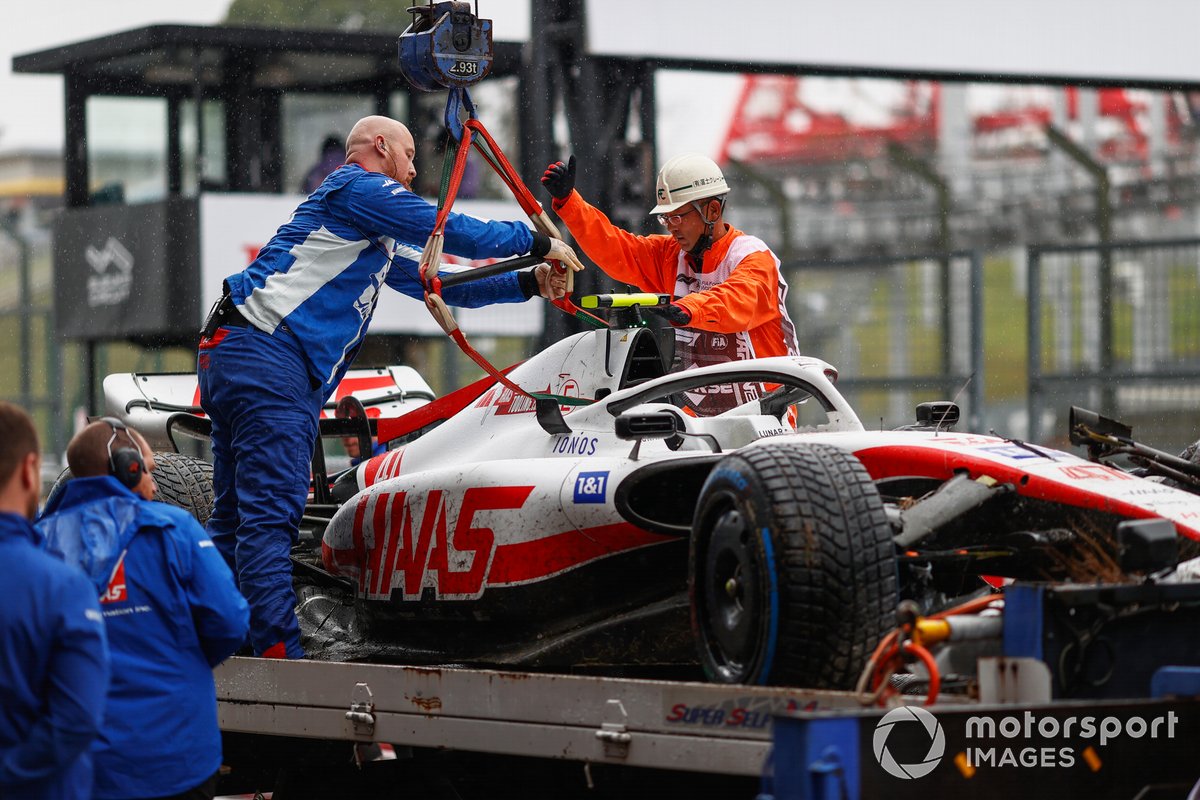 Mechanics and marshals unload the damaged car of Mick Schumacher, Haas VF-22, from a flat bed truck after FP1

Schumacher finished FP1 in an encouraging seventh and was adamant that but for traffic in the final sector he would have posted the fourth best time of the morning.

He also dismissed suggestions that missing out on FP2 will now add pressure on him as his place within Haas for 2023 remains uncertain.

"Pressure is something that I've been dealing with for quite some time. And I would say even all my life. So I don't mind that," he added.

"On the other hand, I always want to do my best. And it doesn't matter what happened before. We take one thing at a time, and that's now FP3 tomorrow, and qualifying.

"We would have been P4 if not for the traffic that we had on the last sector. It looked very promising. And I think the rain really suits our car at the moment. So very much looking forward to it."

With Saturday's running in Japan set be in dry conditions, Schumacher admits he doesn't know if Haas' wet pace will translate when the water subsides.

"Potentially a bit more difficult," Schumacher said of Haas' dry form. "I would say that the other teams have maybe a bit of an advantage in the dry compared to us at the moment.

"But nonetheless, we'll try our best to see what the set-up is like, and what we need to do to have a good qualifying.

"I'm looking forward to the track tomorrow. It's an amazing place to be in. And yeah, hopefully with the car that we have, we'll be able to go into Q3. I think that's going to be the target, and then for the race itself, hopefully some points."