Carlos Sainz says his pass on Max Verstappen for second in Formula 1’s Brazilian Grand Prix sprint was "on the limit", but reckons he had to make his move there.

The Ferrari driver had been charging through the field and was running third as Verstappen ahead of him fell back into the pack.

With Verstappen struggling for performance, Sainz seized the opportunity to force his way past under braking for the Senna Esses on lap 19.

But, as the Spaniard moved past his Red Bull rival through the first left hander, his right-rear tyre made contact with Verstappen’s front wing. This damaged the endplate, which flew off on the back straight soon after.

While Sainz did not intend to clash with Verstappen, he said that Red Bull’s straightline speed advantage meant that he knew his only chance to get past his rival was to made a late lunge under braking.

“It was on the limit for sure,” he said. “They are so difficult to pass, and I had to really go tight into Turn 1 in order to pass him.

“With a Red Bull, you're either aggressive on the braking or you don't pass them, because they are so quick on the straight that you really need to go for it on the braking.

“I'm sorry if I had a bit of contact, but that's racing and sometimes you need to go for it if you want to make it stick.” 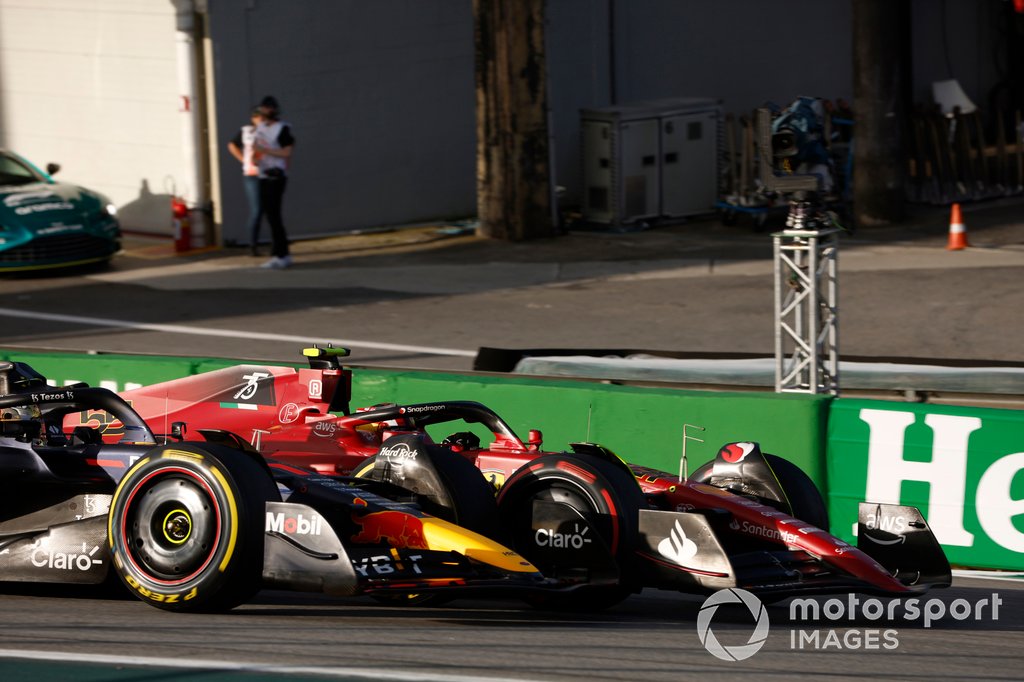 After passing Verstappen, Sainz was able to get some breathing space from the fast-charging Lewis Hamilton behind him – as he admitted he was worried about his tyres being able to hold on.

“Normally [we] have a bit more deg than the Mercs and I could see them pushing quite hard,” he said.

“But I managed to make all the positions at the start and the first couple of laps getting into the fight with Max and George. I had to be aggressive because obviously tomorrow I'm taking the penalty, and I think P2 was the maximum today.

“I was happy with the race. Happy with the pace. It's just that the Mercs look like they picked up the pace recently and they are very quick in the race.”

While Hamilton was not able to make a move on Sainz in the final laps, the Briton said he was delighted to come home third – which means he will start second on the grid tomorrow.

“I'm so, so happy to be here,” admitted the Mercedes driver. “It's been an incredible week. Difficult day yesterday, but what a crowd we've had today.

“This is an amazing result. For us to be on the front row tomorrow is incredible. So from there we should be able to work as a team and hold off hopefully the guys behind.”