Sainz, whose car sustained the damage in the startline collision with Nico Hulkenberg that resulted in the Force India being pitched into the pitwall, insists there was no danger from it.

He was running seventh when he had to pit having been shown the black-and-orange flag, which indicates a driver must have a car problem dealt with because it is considered unsafe.

"I don't think I was putting anybody in danger," said Sainz of the decision to show him the black-and-orange flag.

"I don't know why, because there was nothing dangerous on the car, but I was forced to stop early.

"Even with the car damage, we had good pace, the problem is that we had to stop too early [because of the black-and-orange flag.

"When you do that, you're behind all the traffic and your race is ruined."

Sainz later suffered an MGU-K failure, and is confident that without this even with the stop to remove the bargeboard he would have recovered to finish in the points.

"That's what really went wrong, without that problem points would still have been possible and that's why I'm so angry." 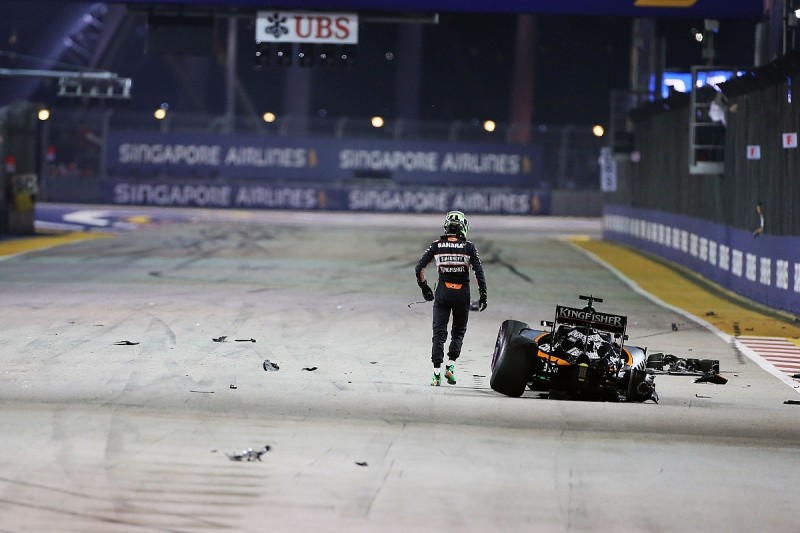 Hulkenberg believes the startline accident cost him a strong finish.

The German made a fast start and was on target to get into the first corner in fifth place, but as a result of Red Bull driver Max Verstappen's slow start he was squeezed between the Toro Rossos of Sainz and Daniil Kvyat.

"I was pulling towards the front and I would have been in clear air with the top cars disappearing in front of me and that could have been quite a straightforward race from there," he told Autosport.

"I had made a really good start off the line and went for the gap in between the Toro Rossos and then I got sandwiched.

"Max also caused a bit of trouble because he had a really poor launch, and then Carlos had to go round him, which made it a bit tight for me with the Toro Rossos.

"Then Carlos hit me with his front wheel on my rear tyre and that sent me into the wall."

Stewards investigated the collision, but deemed it to be a racing accident.