A gust of wind sent Ferrari Formula 1 driver Carlos Sainz Jr off the road in Hungarian Grand Prix qualifying, consigning the Spaniard to 15th place on the grid.

Sainz lost control of his car at the final corner, hitting the barrier with the left-hand side of the car with a 22G impact.

Nevertheless, he tried to get going, but his front wing became dislodged under the front wheels.

He was unable to find reverse to back away and drive around the broken wing, so he had to abandon the car and drop out of qualifying in Q2.

He was so surprised by the sudden loss of control that he went back to the garage to review the data, where the role of the wind became apparent, a discovery that he admitted made him "more calm".

Sainz had been fourth fastest in FP3 on Sunday morning and repeated that performance in Q1, making the crash at the final corner of the lap even more disappointing.

"Yeah, very frustrating," he said. "And to be honest I'm also very surprised, it's not a mistake that I've done in a long time.

"I went straight away to the garage to see what had happened on the data, and what I could have done differently.

"After having a look at it, to be honest, I'm more calm about it, because I saw that I actually entered the corner 5km/h slower than in the previous run. But there's a 35-40km/h gust of tailwind compared to a 10km/h tailwind in Q1, and this probably just sent me on a massive overseer.

"Unfortunate, but at the same time, I don't want to use it as an excuse. I think I owe an apology to the team. But at the same time, it's not something that I'm going to dwell too much on, because I've seen the data, and it has left me a bit more calm about it." 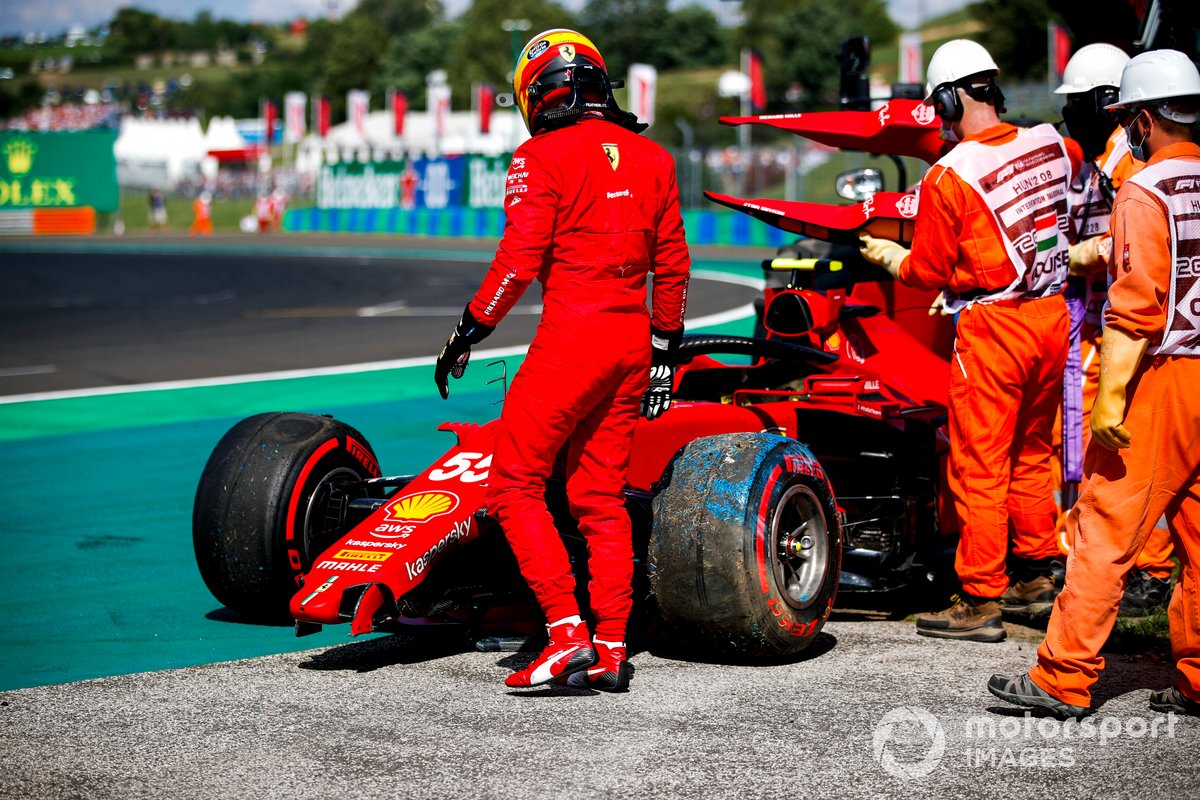 Sainz acknowledged that the Ferrari is not usually a wind sensitive car.

"These cars are massively wind sensitive, as you can imagine. But I've driven [ones with] worse wind sensitivities. And that's why maybe it caught me by surprise a bit. It is what it is.

"I saw that I had entered the corner slower than in the previous run, I said, 'Okay, I didn't try anything crazy or anything stupid, and I just lost it.' It's how it goes sometimes, it's how motorsport works, and learn from it."

Sainz acknowledged that even if he had been able to get the car to the pits, his session was probably over due to the sheer scale of the impact.

"I couldn't find reverse. So maybe something to look into there. I mean, after 22G I'm suspecting I had to stay 20 minutes in the medical checks because it was a big hit.

"I'm suspecting that it was over. My spirit of never giving up this time didn't work!"

Sainz could still drop further down the grid from 15th should his team be obliged to change his gearbox. That could open up the possibility of a pitlane start and making set-up changes to make it easier to overtake.