Carlos Sainz and his Ferrari Formula 1 team were frustrated by the FIA stewards' decision-making after he copped a €25,000 fine for impeding Lance Stroll in Monaco Grand Prix practice.

On Saturday Sainz held up Aston Martin driver Stroll at the end of a lap, for which he was summoned by the stewards. Sainz was fined and also earned his third reprimand of the 2022 season.

While Sainz accepted blame and apologised to Stroll, he was left frustrated on Sunday night at the lack of consistency of punishing similar offences.

On his out-lap after a crucial pitstop sequence Sainz lost the lead and potential victory after being held up for half a lap by Williams driver Nicholas Latifi, amid numerous other incidents on the narrow streets of the principality.

The time lost allowed Red Bull's Sergio Perez to overcut him and snatch the lead, which he kept until the finish.

PLUS: The mistakes putting Ferrari's bid to end its F1 title drought in jeopardy

Sainz's team-mate Leclerc was also held up by lapped traffic during an important phase of the race, as the other Williams of Alex Albon emerged in front of Leclerc after pitting for slicks, while the Monegasque driver was still using intermediates.

Albon said he thought he could stay ahead due to the extra pace of the slicks, but finally held up Leclerc for an entire lap before going straight at Ste Devote.

Sainz said he couldn't understand why neither Williams driver faced action, while he was penalised for a less impactful offence in FP3.

"I cannot count the times that I got impeded in Monaco this weekend, both being dangerous and not dangerous," Sainz said.

"What I don't understand is why we got fined 25,000 euros as a team for an impeding which I did. 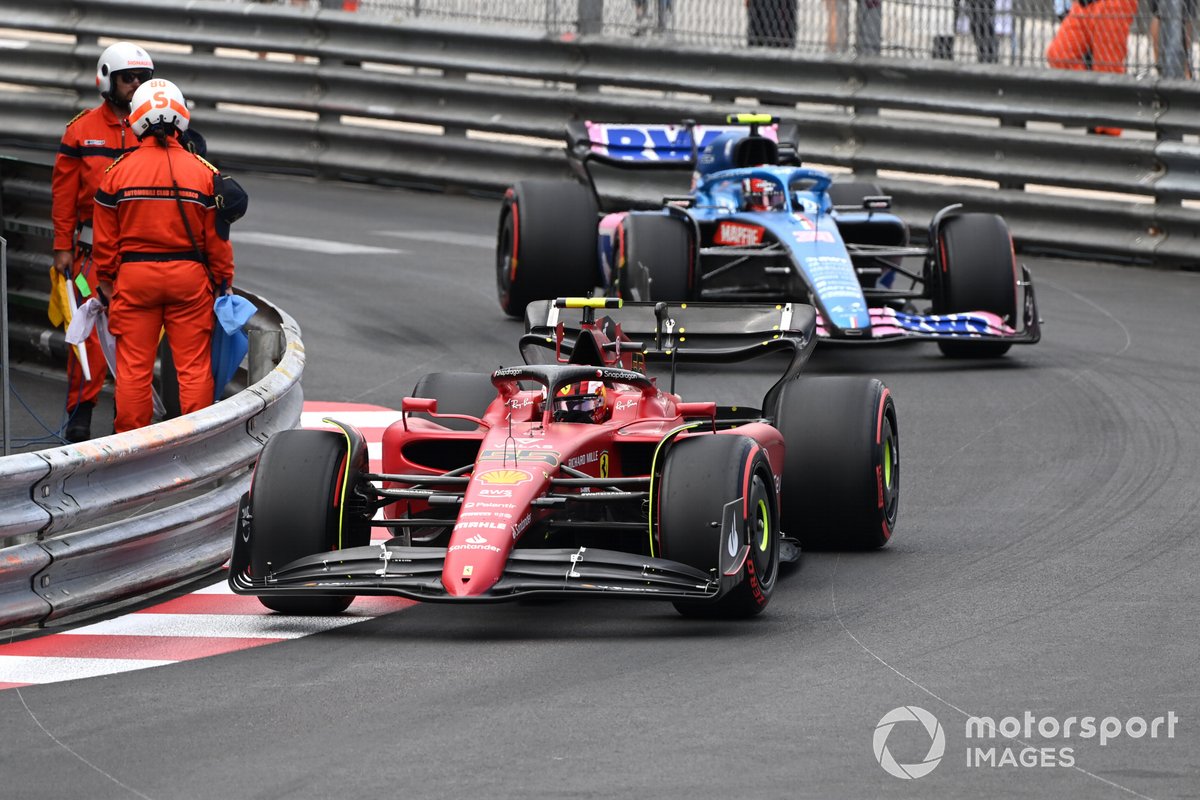 Sainz was fined for impeding Stroll in practice

"I accepted the blame and I apologised to Lance. I don't understand why other cases are not investigated and other people are not fined for exactly the same thing."

He added: "It cost us both the same and no further action. That was proper impeding, so this is where we want more clarity and we want more consistency, as simple as that."

Team boss Binotto said Sainz's fine was not the right choice as he felt his impeding of Stroll was not dangerous and the team tried its best to avoid it on Monaco's busy streets.

"We know that the traffic situation in Monaco is always very difficult," Binotto added.

"We did our best, we believe that the impeding he made was certainly not dangerous.

"We're not too happy about the fine, we believe it was not the right choice.

"We believe that as a team and driver, we did our best in order to avoid it that at the time and not making anything wrong with it."