Leclerc ended the session less than a tenth up on Verstappen, but was half a second clear of team-mate Sebastian Vettel and more than seven tenths quicker than the fastest Mercedes of Valtteri Bottas - although both of the manufacturer's drivers set their best times on a harder tyre compound than the Ferraris.

Leclerc left his first flying lap until just short of the half-hour mark, and immediately went quickest on softs with a 1m37.593s, despite having to slow for yellow flags caused by Daniil Kvyat's broken down Toro Rosso.

Kvyat, who will start the race from the back of the grid due to engine-related penalties, pulled up off track after losing drive exiting Turn 14, his stoppage soon leading to a brief virtual safety-car period. He did not rejoin the session.

Leclerc immediately improved by almost a second once the VSC was cleared, only to be usurped by the first representative efforts from Mercedes pair Lewis Hamilton and Bottas.

Hamilton held the lead by the time the teams handed over their first sets of tyres, the championship leader having recorded a 1m36.031s on softs despite complaining his brakes were "not working properly" during the run.

The Silver Arrows switched to harder tyres for the rest of the session, and Bottas soon took over out front on medium tyres, lowering the benchmark to 1m35.198s.

While Vettel only found a couple of tenths compared to that effort, Leclerc immediately delivered a 1m34.462s that would keep him in the top spot through to the chequered flag.

Red Bull driver Verstappen spent much of the session outside of the top 10, but picked up the pace on used soft tyres with 20 minutes left on the clock to lap within 0.082 seconds of Leclerc.

Bottas and Hamilton made up the top five behind Vettel, with Hamilton trailing his Sochi specialist team-mate - who was told on the radio his rear wing had failed in the closing seconds of FP1 - by two tenths of a second.

The second Red Bull of Alex Albon was a further tenth down in sixth place, and some ninth tenths slower than Verstappen's late-session pace.

The two Renaults were best of the rest in seventh and eighth, with Nico Hulkenberg going half a second quicker than Daniel Ricciardo.

Ricciardo went off track at Turn 10 after the chequered flag fell, demolishing the rear wing of of his RS19 against the barriers and having to nurse the damaged car to the pits. 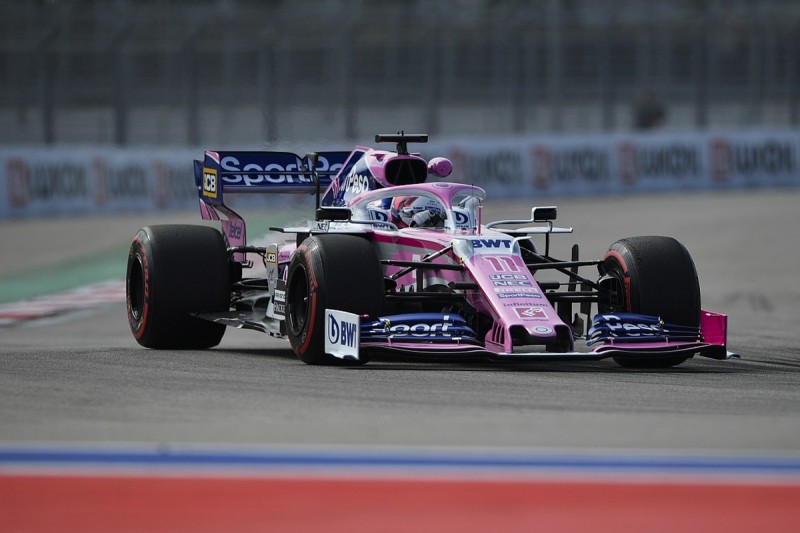 The lead Racing Point of Sergio Perez and newly re-signed Haas driver Romain Grosjean made up the top 10.

In the absence of his team-mate Kvyat, Toro Rosso's Pierre Gasly had sat seventh behind the usual leaders after the opening runs, only to be shuffled down to 12th - one spot behind the lead McLaren of Carlos Sainz Jr - by the end of proceedings.

Alfa Romeo's Antonio Giovinazzi had a spin early on at Turn 4 and wound up 17th on the timing screens, trailing squadmate Kimi Raikkonen by half a second.

Also spinning during FP1 was Robert Kubica, the Williams driver only just keeping his car out of the inside wall exiting Turn 5.

Kubica, who was two tenths off team-mate George Russell's pace, has been consigned to the back of the grid for Sunday after taking on a new Mercedes internal combustion engine, turbocharger and MGU-H.

Ricciardo: Drivers unhappy being in dark on new F1 proposals