The Finn set the fastest first two sector times of all on his final flying lap in qualifying for the first ever F1 race at the Sochi Autodrom, but ran wide through the final corner and failed to improve on his best effort.

Williams performance chief Rob Smedley told reporters after the session that top spot would have been beyond his driver, even if he had finished the lap cleanly.

"I think he could have possibly got on the front row. Lewis's time was probably a little bit too far away from what we could have achieved," Smedley said.

"Had he put that lap together it would have been very close with Nico. He did absolutely the right thing - we had third secured and he just went for it.

"He took a lot out of the tyres in the first and second sectors - he was three tenths up - and you knew it was going to be difficult in the last sector.

"He got through most of it alright but then got out of shape in the penultimate corner, which put him off-line, and once you go offline you pick up dirt on your tyres and he wasn't able to make it around the final corner. He lost all the time there."

Smedley suggested Williams had actually produced a more competitive qualifying showing in Russia than when it locked out the front row for the Austrian GP in June.

"If you look at it purely from a scientific and technical point of view this [track] is quite similar to Austria," Smedley explained. 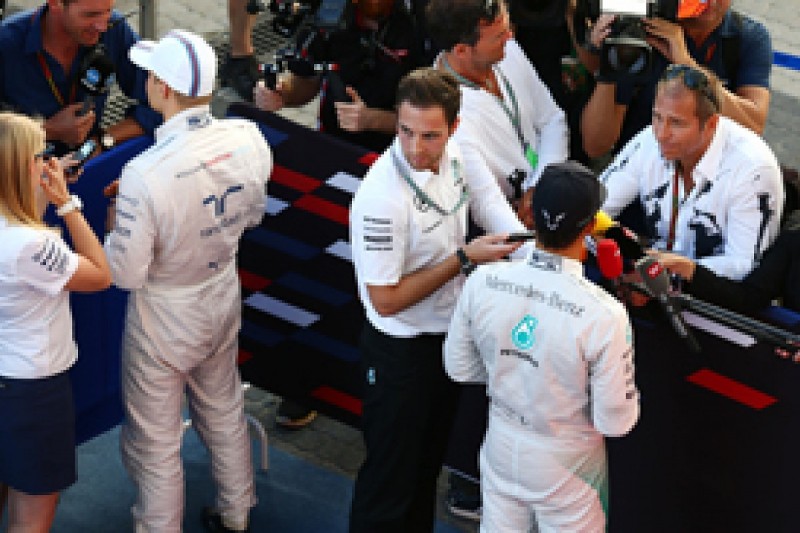 "What we've needed here that wasn't necessary in Austria is a great deal more knowledge about tyre management and how to get them working, [given] the tyres are reasonably conservative for this track.

"Compared to Austria, we had a front row lockout there, but the Mercedes didn't really take part in Q3; here the Mercedes took part in Q3 and I think we were even maybe a little bit more competitive with more corners. It's very encouraging for us."

Bottas's team-mate Felipe Massa dropped out after Q1 thanks to a fuel pressure problem on his FW36.

The team has elected to change the Brazilian's engine for Sunday's race, having been unable to conclusively determine the cause.

Massa will start the race 18th on the grid.