George Russell has revealed that his skip across the gravel in qualifying for Formula 1's Brazilian Grand Prix bashed him around so much he broke his headrest.

The Mercedes driver was making a second attempt at a quick lap in Q3 on the damp circuit when he ran off the road at Turn 4 after locking up the rears on the entry and touching the grass.

He could do little to slow himself down and ended up bouncing through a gravel trap before ending up on the escape road near the tyre barriers.

But after trying to do a spin turn to get himself facing the right direction, his rear wheels got stuck in the gravel and he was out on the spot.

While the deteriorating weather conditions meant no one was able to better their times, leaving Russell still third on the grid as Kevin Magnussen took a shock pole position, the Briton admitted on his return to the pits that the off had not been without his consequences.

Asked what he was thinking as he ran off the road, he said: "What's going through my mind is I was getting a really bad headache. I've broken the headrest because my head was banging so much. It was a pretty unpleasant experience.

"Then I lost the rear. I booted it. I wanted to do a 360 and then dipped the rears in the gravel. So probably not the wisest choice I've ever made. But, as it turned out, we knew that first lap was it all."

Russell said it had been tricky to extract the most from the car over that critical first Q3 lap because the rain was making conditions worse by the second. 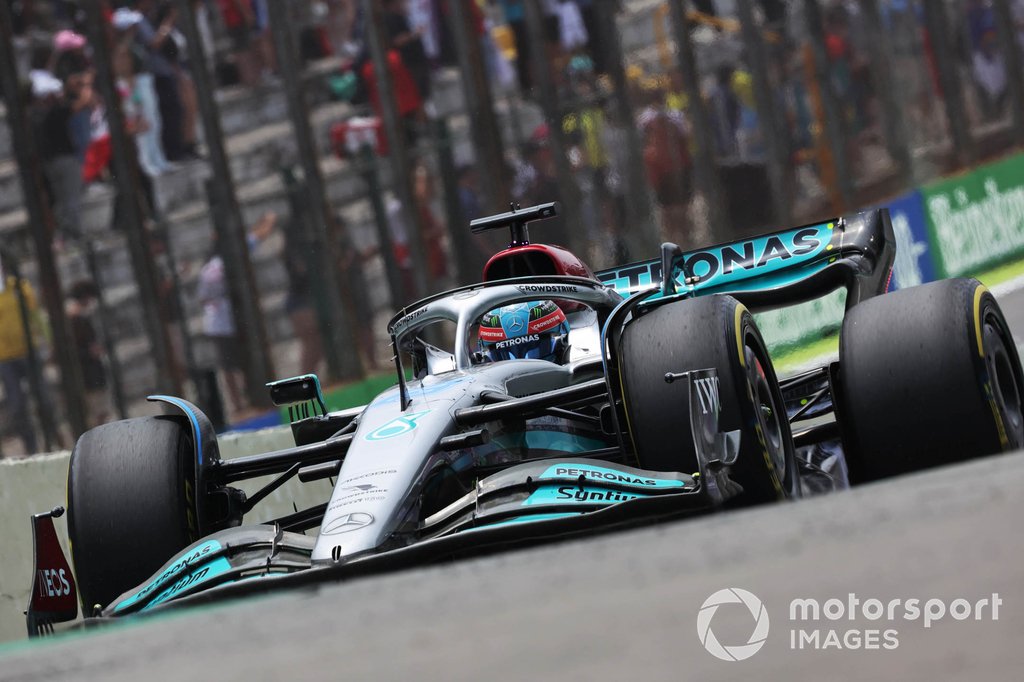 "It's mixed emotions because we were obviously one of the last cars to go out in qualifying, and it was such a unique experience," he said.

"As the lap progressed, the rain was falling harder and harder, and I got to the last corner and it was a lot wetter than it was on the lap before. So we had to be really tentative.

"But massive congratulations to Kevin [Magnussen] and Haas. This is what Formula 1 and sport is about; to have some crazy results like this. But, for us, P3 is a good place to start for the sprint."

Russell's teammate Lewis Hamilton did not have as good a time in being the last car on track, as he faced the worst of the conditions and ended up only eighth on the grid.

"I was the last car out, so I think I just got the earliest part of the rain or something. I probably lost too much temperature in the pitlane as well. So just a bit unfortunate, But George did a great job, and congratulations to Kevin."