George Russell says that the wear on his intermediate rubber during the Japanese Grand Prix resulted in the “most tyre management" he's faced in Formula 1.

All drivers were obliged to use full wet tyres for the restart after the red flag, although it was apparent as they ran behind the safety car that intermediates were soon going to be an option.

Only Nicholas Latifi and Sebastian Vettel opted to do so right away as the green flag flew, and then Lando Norris and Valtteri Bottas followed suit at the end of the first flying lap.

It soon became clear that inters were the right choice, and thus most drivers came in on the next lap.

Running in seventh place, Russell engaged in a heated debate with his engineer about whether or not he should come in.

Russell eventually obeyed the order to pit, and followed team mate Lewis Hamilton into the pits, where he lost some precious seconds as the cars were doubled stacked.

By the time the stop sequence had unfolded Russell had tumbled from seventh to 12th, while Hamilton in contrast retained his fifth place.

Russell was also four places behind Fernando Alonso, who had been immediately ahead of him at the restart, and had gone a lap longer to avoid being double stacked behind team mate Esteban Ocon.

As soon as he emerged from the pitlane Russell made his frustration clear, saying, “That was the worst decision we made.” 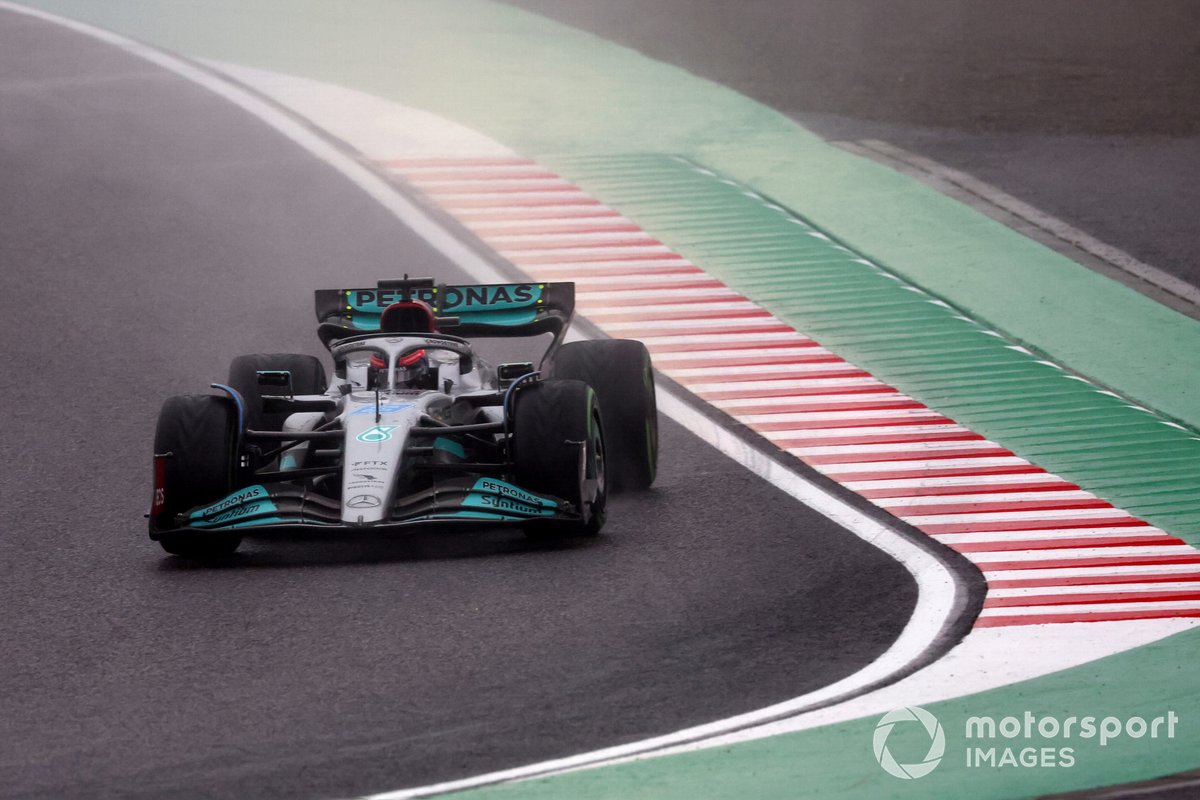 From 12th Russell was ultimately able to recover to ninth place, having put in some impressive overtaking moves. However his main focus was on keeping his intermediates alive.

“That was the silver lining, that was enjoyable and fun,” he said of the overtaking. “But it was truly a race of tyre management. It was probably the most amount of tyre management I’ve ever done in a F1 race, considering it being wet, it’s pretty surprising.

“It capped off two bad races for us for various reasons. Yeah, we need to review and see what happened.”

Russell had said after qualifying that he would prefer a dry race as a lack of DRS in wet conditions would exacerbate the lack of straightline performance of the Mercedes compared to rivals.

“I think it’s difficult for everybody,” he said. “I don’t know what the race was like as a whole, but these F1 cars without DRS, you can’t overtake. Maybe in the future there needs to be a bit of a rethink as to how you get that advantage when you’re within one second.”

Asked by Autosport about his frustrations over the pit strategy he said: “I need to look back and review it. I knew that everybody would be pitting, and we’d lose a whole load of time by stacking, because everybody was line astern.

“I think I could have done one more lap. I don’t know where Fernando exited the pits, but I was right behind him, I was quicker than him, and I would have pitted the same lap as Fernando. But yeah, I probably lost 10 seconds in the pit lane.”