George Russell admits that his Mercedes Formula 1 team is “confused” by the qualifying lap time delta to pace-setting teams Ferrari and Red Bull at the French Grand Prix.

For much of this season the trend has been a big gap in qualifying between Mercedes and its rivals, and then a much closer comparison in the race.

That continued in France where the quickest W13 of Lewis Hamilton was 0.9s off pole man Charles Leclerc in fourth place, while race pace has looked much more encouraging.

Russell himself qualified sixth at Paul Ricard, behind the McLaren of Lando Norris, having made a mistake on his final lap.

"The start of Q3 was good, my second lap wasn't quite there, I made a bit of a mistake,” he said.

“P6 not the end of the world. But I think we're a bit more confused about the pace delta to the front.

“I think we're the only team who closes the gap in race pace compared to qualifying pace. It's the right way around for it to be, that's how we prefer it. But obviously it's put us in tricky spots for a lot of this year."

In Sunday’s race both Mercedes drivers will benefit from the penalty for Carlos Sainz, who starts 19th.

Russell was optimistic about prospects for France before the weekend, with the track’s smooth surface and fast corners expected to favour the W13, and he remains upbeat about the race.

"I think there's definitely optimism because we feel like we do have a direction to keep chipping away at, and we do think we will make good progress. Qualifying is the day where you sort of you have that clearest case comparison to your rivals.

“And it's clearly a bit difficult when we see how far we were from pole today. But I think tomorrow is the day we need to judge. I do think we will probably have a faster car tomorrow than we've had on average this season. And hopefully, it's a totally different feeling and story this time tomorrow than it is currently.

“The high fuel pace was relatively competitive, we should have a chance against Checo [Perez].

"And even if Carlos was there probably would have had a chance against Carlos. But Max [Verstappen] and Charles are a step ahead of everyone else at the moment." 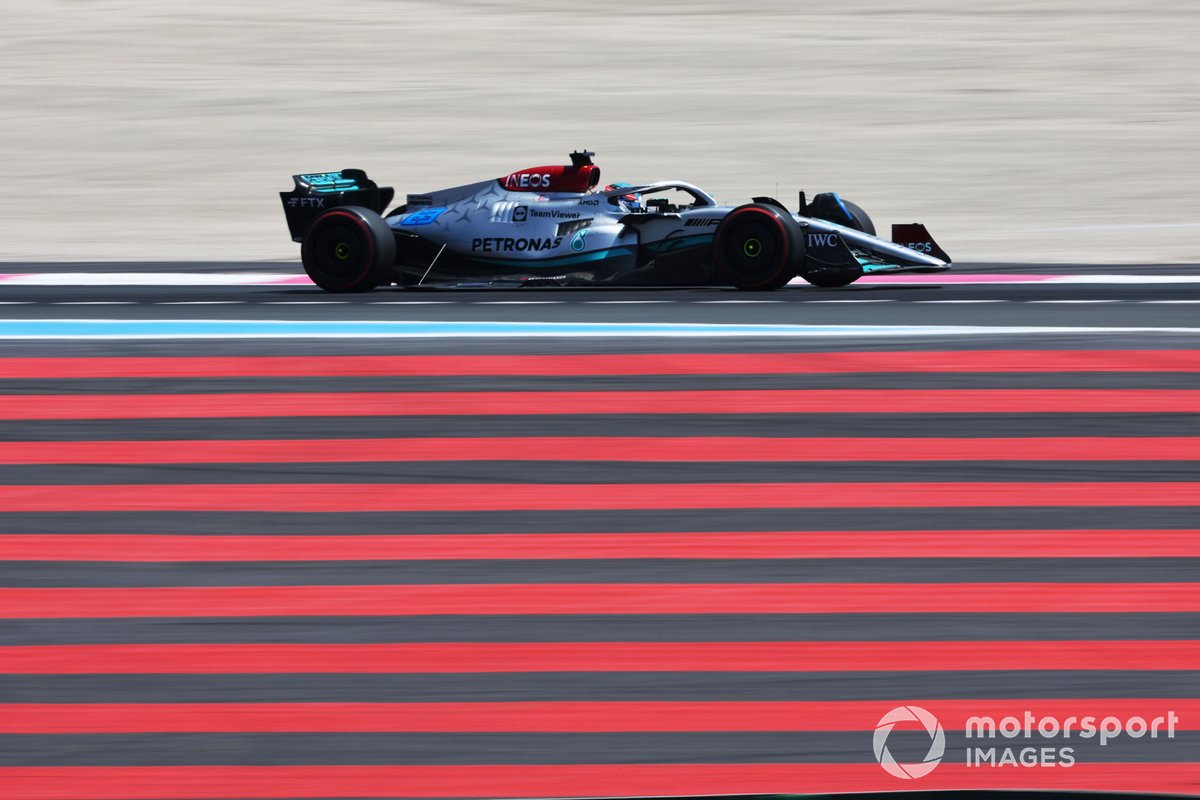 Mercedes boss Toto Wolff admitted after qualifying that the team “couldn’t figure out” where it was losing performance, which is why the team tried different wings during practice, and Russell admitted that created a compromise.

"I think when you're so far off the pace you want to try everything you can to try and close that gap,” he said.

“And maybe that's a lesson for us that we just need to almost focus on ourselves and really try to focus on getting the most out of the car, rather than experimenting too much.

“But we need to experiment at this moment to see what works and what doesn't work. And yeah, a little bit tricky at the moment. But let's see after tomorrow.

"I think I obviously need to get past Lando quickly. The fact that we've got fast a race car is good. I think it's going be very difficult race tomorrow with the temperature. “