In his first appearance standing in for Lewis Hamilton at Mercedes, Russell dominated the majority of the race after taking the lead from team-mate Valtteri Bottas at Turn 1.

Russell sat over five seconds clear of Bottas following their sole planned pit stops, only for a safety car period to be called and neutralise the race.

Mercedes tried to double-stack its cars in the pits, only to mix up the tyres and place a set meant for Bottas' car onto Russell's.

This forced the team to pit Russell again, dropping him to fifth for the restart, and has also sparked a post-race investigation from the stewards.

Russell managed to fight his way back up to second, and was closing on race leader Sergio Perez before suffering a slow puncture that forced him to pit again.

The British driver fought his way back to ninth place, and picked up an additional point for the fastest lap of the race. 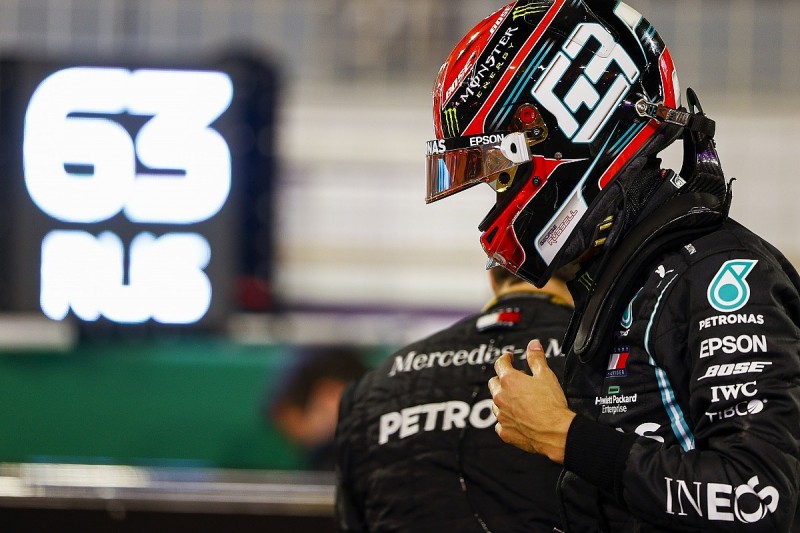 "I've had races where I've had victories taken away from me, but twice, I couldn't believe it," said Russell.

"I couldn't believe what was happening. I drove my heart out, I had the race under control, especially in the beginning, and then obviously the safety car came out, which was annoying.

"But I felt comfortable. I put some good overtakes, I was fired up, I was ready to chase Sergio to get the win back, and it would have been tight, but we would have done it.

"And then it went away from us again. So that's racing."

Russell acknowledged it had been a rollercoaster of emotions across the race weekend, and that he was quick to talk to his parents after the race to pick himself up.

"If you'd told me at the start of this weekend I would have scored some points, I'd have said right, that's going to be a pretty fantastic weekend!" Russell joked.

"It really hurt, honestly, it really bloody hurt when I got out of the car.

"I spoke to my parents straightaway. I know they were feeling it. They said you've got so much to be proud of. Same with Toto [Wolff] and James [Vowles] and Bono. We hugged it out.

"So hopefully I've given Toto some problems to sort out for the future. I'm happy. I'm proud."