George Russell said the "memories came flooding back" as his first-ever Formula 1 grand prix win with Mercedes in Brazil left him "speechless".

Russell laid the groundwork for his maiden grand prix win with victory in Saturday's 24-lap sprint race, which yielded him de facto pole for Sunday's race.

The 2018 Formula 2 champion took a commanding lead at the start, his victory chances boosted by a clash between teammate Lewis Hamilton and world champion Max Verstappen.

Regardless of the melee behind him, Russell delivered a measured drive as Mercedes appeared to be the class of the field, only for his resolve to be tested when a late safety car bunched up the field.

But Russell resisted pressure from Hamilton to take his first-ever win and Mercedes' first victory in a fraught 2022 season, with the 24-year-old finding redemption for his lost win at the 2020 Sakhir Grand Prix.

"I'm speechless. On the in-lap all of these memories sort of came flooding back," a tearful Russell said immediately after the race.

"Starting off with my mum and dad in go karting and going through and all the support I've had from the rest of my family, my girlfriend, my trainer, my manager.

"And then obviously the likes of Gwen [Lagrue] who gave me the opportunity to get on the programme with Mercedes and James Vowles and Toto [Wolff]. The list is endless. I can't thank enough and yeah, super proud." 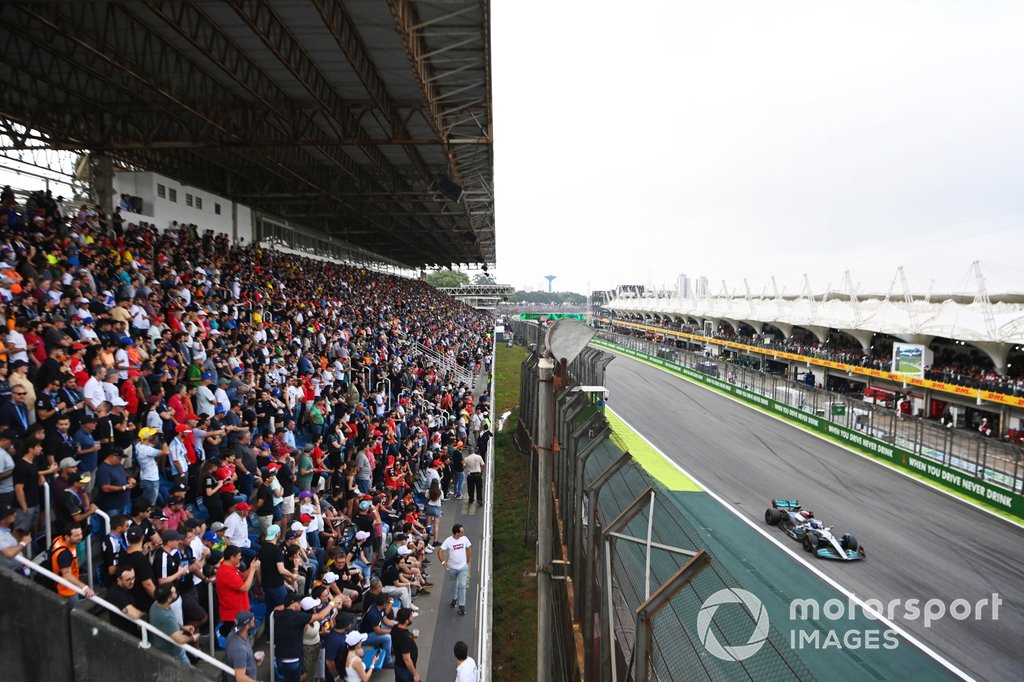 Russell acknowledged this season has been an "emotional rollercoaster" for everyone at Mercedes after dropping the ball with its troubled 2022 car and praised the Brackley team for capping off a challenging campaign with a win after all.

"What an amazing feeling, just a huge thank you to the whole team for making this possible," he said.

"It's been an emotional rollercoaster this season. This race was a really tough race. I felt in control, Lewis was super-fast and then when I saw the safety car I thought 'oh Jesus this is going to be a really difficult end'.

"And he put me under so much pressure, but so happy to go away with the victory."

Hamilton was quick to pay tribute to Russell's "amazing drive" and said he was proud of how Mercedes bounced back from its 2022 blip.

"I've got to say huge congratulations to George. What an amazing drive he did today," Hamilton said.

"He did an amazing qualifying yesterday, so he truly deserves it.

"To my team, so proud of everyone back to the factory and here, this is an incredible result.

"We've worked so hard through this year to get a 1-2, to get a win, and so this is hugely deserved from everybody so a big thank you."

Perez fumes as Verstappen defies Red Bull team orders: "It shows who he really is"

Verstappen: I had my reasons for not giving Perez place in Brazilian GP