In every other 2019 qualifying session so far, Williams has been at least one second behind the next slowest car.

That was despite Russell missing his final run in practice three due to a crash that resulted in a five-place grid penalty for a gearbox change, dropping him from 19th to last in the start order.

"Overall our pace has looked slightly stronger this weekend than anticipated and I was feeling confident in FP3," said Russell, when asked by Autosport about his encouraging qualifying pace.

"But then obviously putting [the car] into the wall was probably not great for my confidence into qualifying. But I was pleased with that final lap.

"The fact that everybody has brought their big upgrades and we haven't really brought anything to the car, just a few little test items to try to understand the car better, is encouraging."

Russell intimated that Williams had put a particular effort into qualifying pace this weekend, but he thinks it can at least challenge the cars ahead in the opening laps.

"Perhaps we optimised for qualifying more than the guys just ahead of me did but there's no reason yet we can't be on the back of them in the opening laps and see what happens later in the race," he said.

"But at the moment we're just being realistic. 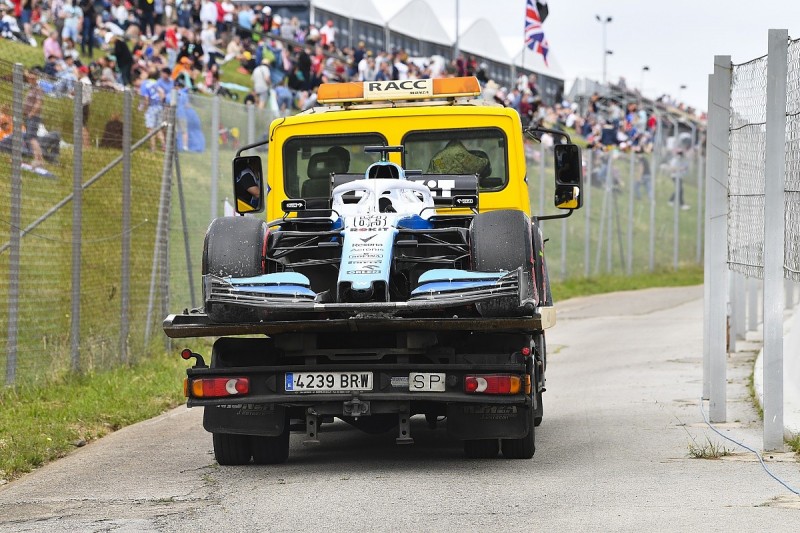 The crash at the end of final practice, in which Russell spun backwards into the tyre wall at the long Turn 4 right-hander, caused damage to the rear wing, diffuser and rear suspension as well as the gearbox.

"It was very frustrating. From a very small hit, we did a lot of damage," said Russell.

"So that was a real shame, but nothing that will set us back."

He added that he was "very happy" with his personal performance in qualifying.

"I've had some really strong qualifyings at points this year, so from a personal perspective I left that session quite satisfied really," said Russell.

"Obviously from a personal perspective you're changing your goals slightly.

"You've got to be realistic and I've got to set myself goals and targets before each weekend and session and at the moment I'm pleased with the job I'm doing."

Leclerc surprised by Ferrari damage after running over kerbs in Q2