George Russell admits that he took it “too cautiously” at the start of the Formula 1 Mexico City GP when he lost places to Lewis Hamilton and Sergio Perez.

Russell started second, but after giving space to Hamilton he emerged from the opening sequence of corners on the first lap in fourth place, a position he still held at the end of the race.

The Briton admitted that recent frustrations, including his first corner collision with Carlos Sainz in Austin, encouraged him to take a careful approach, especially when battling with his team-mate.

“I knew I wouldn't have been able to overtake Max [Verstappen] on the outside,” said Russell when asked by Autosport about his first lap. “But having Lewis on the inside I didn't want to be too aggressive, obviously him being my team-mate.

“And ultimately that that cost me and caused me to lose two positions. So ultimately if I had managed to maintain position, I probably would have finished second today.”

Asked if he would have given the same space to anyone other than his team-mate, Russell said: “Yeah, I think it was more in Turn 1 to be honest, I would have ordinarily just chopped across or in Turn 2 I would have run the driver wide.

“So yeah, that's the way the game works sometimes. I'd like to think it would have been the same had it been the other way around. Maybe, maybe not, I'm not too sure.

“But I've had a bit of a scrappy last three races on my behalf, too many incidents, too many mistakes. And that was probably a factor of taking it too cautiously. And there's a balance in there somewhere.” 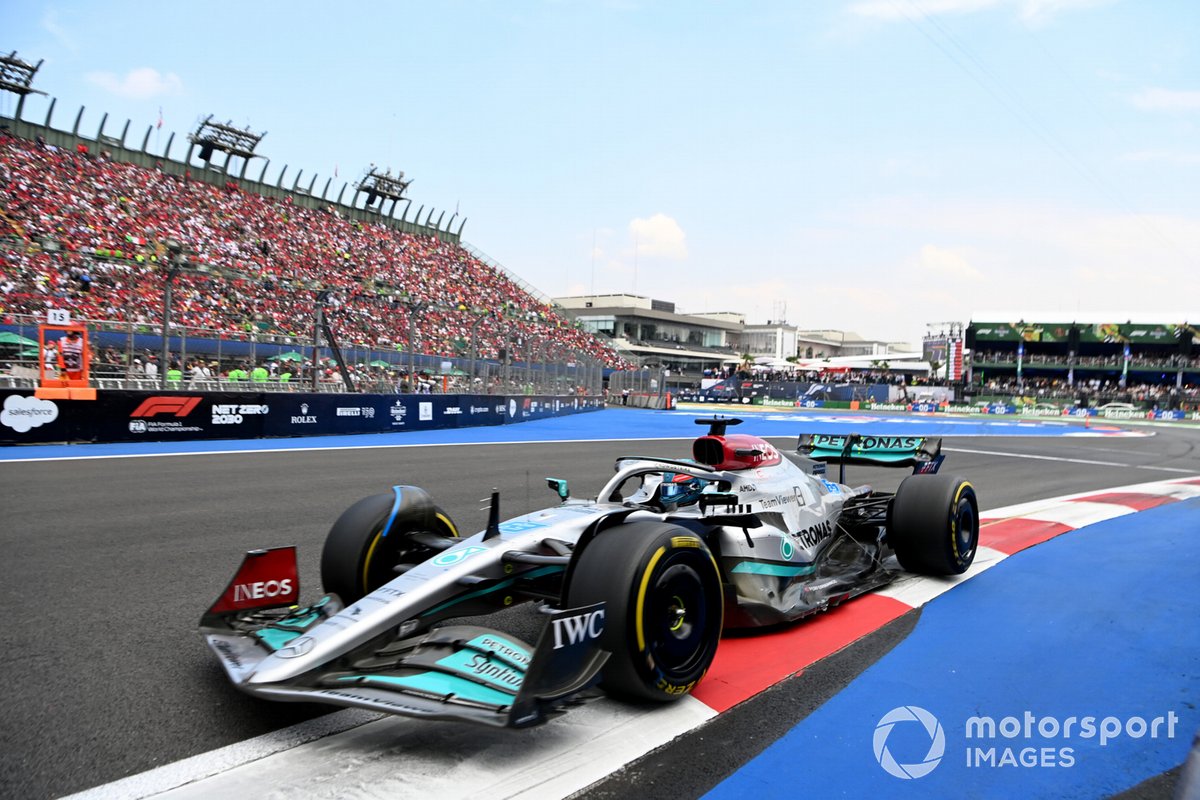 Russell admitted to some frustration about the strategy he ran in Mexico. Early in the race he indicated that he wanted to run long on his opening set of mediums and then switch to softs, a choice used very successfully by Daniel Ricciardo. However, not long after that message he mirrored Hamilton’s strategy by going to hards.

“Lots of positives to take away from the weekend,” he said. “It would have also been interesting to see how we performed had we started on the soft and gone to the medium, or even if we extended the medium and went to the soft at the end. That was what I was pushing for in the car. Everything's easier in hindsight.”

Expanding on the strategy choice, he said: “There was no real thought about starting on the soft, but there was definitely a thought of extending the medium, and going into the soft.

“I'm not too sure, I think we reacted to [Nicholas] Latifi and Lewis, they both put the hard on and were setting green sectors everywhere. But the hard tyre just did not work from lap two onwards.

“I think generally this weekend Pirelli brought too hard a compound. So the soft should have been a medium, the medium should have been the hard, and the hard was like an ultra hard, effectively.

“So seeing Ricciardo's performance is a little bit disappointing as well, because I really felt like I could have continued on that medium at a good pace, and we would have been flying at the end on that soft.”

Russell made it clear on the radio that he wasn’t happy with the hard tyres, but there was nothing that the team could do. In the end he made a late extra stop just to secure fastest lap.

“I don't think there was so much frustration as such,” he said. “You're just trying to put your point across, and when you're out there it's physically demanding, and there's a lot going on and you're struggling with the car, and it may come across in that way.

“But I was trying to get my point across. I felt good on the medium. The pace was looking strong, before Lewis pitted I was closing the gap. When I was in the lead I was setting personal bests.

“As I said, it's so easy in hindsight, and perhaps we should have recognised that there was no way I would have been able to overtake Checo with the hard tyre, and the only way would have been to put a soft.”

10 things we learned from the 2022 Mexican Grand Prix