George Russell found it “a little bit difficult” judging the risk and reward of passing Max Verstappen to win the Brazil Formula 1 sprint race before making the move stick.

Russell picked up eight points and P1 on the grid for Sunday’s Brazilian Grand Prix after charging from third place on the grid to win the final F1 sprint of the season, defeating Red Bull rival Verstappen in a wheel-to-wheel battle.

Russell was aided by starting on the soft tyre compared to Verstappen’s mediums, and was able to get within DRS range of the two-time world champion for the lead once both had picked off pole-sitter Kevin Magnussen.

But Russell’s first two attempts at passing Verstappen proved futile as the Dutchman defended into Turn 4, hugging the inside line to ensure he stayed ahead.

On lap 15, Russell tried a move at Turn 1 before lining up a move on the run to Turn 4 and using DRS to take the lead before they turned in to the corner.

Russell then pulled clear to win the sprint by 3.9 seconds from Ferrari’s Carlos Sainz, meaning he will line up P1 on the grid at Interlagos tomorrow. Verstappen slipped back to fourth after picking up damage to his front wing.

Asked about his move on Verstappen, Russell explained that it was “a little bit difficult” due to the risk of falling to the rear of the field and any possible incident.

“Obviously, this is a sprint race, and you've got to manage that risk-reward,” Russell explained after the race.

“So even though I was dying to get that victory, I didn't want to risk it too much and end up in with no points and starting at the back.

“But we made it stick, third time lucky.” 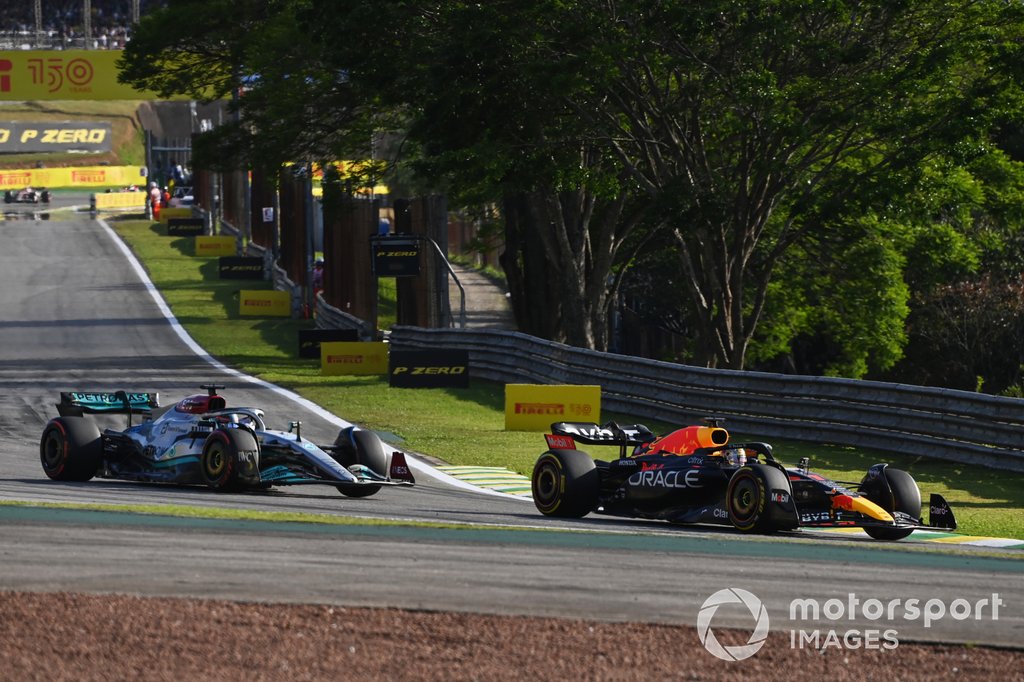 With Sainz dropping five places due to an engine change, Mercedes will lock out the front row of the grid on Sunday after Lewis Hamilton crossed the line third place in the 24-lap sprint.

It marked a big breakthrough for Mercedes in a season that has seen it struggle to match Red Bull and Ferrari for pace, failing to win a race all season.

“I wasn't expecting to have that much pace, but I think it goes to show all the hard work everybody's putting in and the progress we as a team have made,” said Russell.

“These last three races since Austin, the car has been feeling really great. Obviously difficult to know how Max would have got on had he been on the soft tyres. But nevertheless, standing here is a great feeling.”

Russell added that he thought Verstappen would be “flying tomorrow” from third place behind the two Mercedes cars and remain a threat.

“But we're in a luxury position that we can maybe split the strategy and go for the win,” he added.