Romain Grosjean has been told that a new deal at Lotus should be a formality, even though he will have to wait a bit longer for his contract to be sorted

Although the Frenchman has impressed greatly in recent races - which included fighting with Red Bull for victory in the Japanese Grand Prix - an option Lotus has on him has not yet been taken up.

Team principal Eric Boullier has said that the priority of team owners Genii Capital has been on securing the outfit's long-term financial situation, which means driver matters have been put on the backburner.

When asked in the wake of Grosjean's podium finish in Japan if he would definitely be kept for next year, Boullier said: "I don't know. I need to get the written confirmation of my board and then we will see.

"Romain already has a contract with us for next year, but it is not a fixed contract - Lotus has to take the option or not. We have to do it in a few days' time, so we will see."

Grosjean may not have to wait much longer though, with investment partners Quantum Motorsports expected to finalise its deal to buy into the team imminently.

Once that deal is complete, then it is expected that Lotus will partner Grosjean with Nico Hulkenberg, who has been its main target since Kimi Raikkonen announced he was leaving.

Although having to bide his time for his future to be secure, Grosjean has left team chiefs impressed. 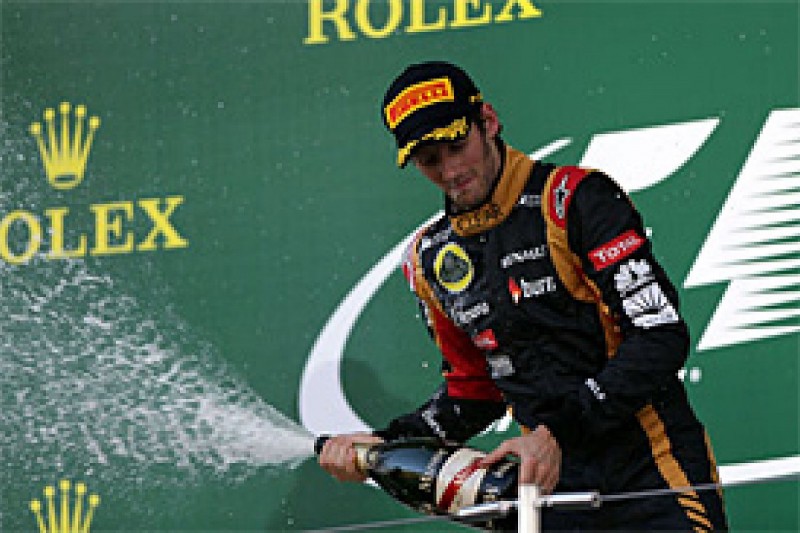 "I think this is a level we can expect, and this is what we wanted him to do," said Boullier about Grosjean's recent form.

"We first wanted him to establish himself like the driver he is now, but on top of this, since Kimi announced he is leaving, it was up to him to step up - and he is doing it."

Lotus head of trackside operations Alan Permane added: "Romain has grown all the time - he has grown in confidence now.

"He has that belief in himself that he can do it, and the Japanese GP will have done him the power of good.

"To lead a race and pull away from Red Bulls and even to be mixing it with them is brilliant, especially when you look the fourth placed person is 30 seconds down the road."