Hulkenberg was not punished for the incident, but Max Verstappen received a 10-second penalty for taking out Red Bull team-mate Daniel Ricciardo at the next corner, and Grosjean's Haas team-mate Kevin Magnussen was docked five seconds for forcing Hulkenberg wide later in the race.

Grosjean says that he will raise the subject of penalty consistency with FIA race director Charlie Whiting at the drivers' briefing at the next grand prix in Belgium, having already discussed it after Sebastian Vettel and Verstappen's British GP battle.

"It's come up before, and I went to see Charlie after that briefing, because there was some great racing between Vettel and Verstappen in the last race, but it was off track and coming back, so I said 'what can we do?'" Grosjean told Autosport.

"We want racing, but we don't want wheelbanging, we're not in NASCAR."

Grosjean was frustrated Hulkenberg did not get a penalty for their incident and with the fact that there is often more leeway with first-corner clashes.

"It was a big hit and I went pretty high in the air," he said.

"He had lots of space on the inside, but he locked things up.

"I don't see the difference between Nico and Verstappen, to be fair.

"Again, the stewards' consistency is a bit strange.

"It was Turn 1 - but Spa-Francorchamps in 2012 [when Grosjean earned a race ban for triggering a multi-car incident] was Turn 1, and we can't do whatever we want.

When it was put to Grosjean that the FIA's recent policy was to give drivers more freedom to race, he replied that Magnussen's battle with Hulkenberg was an example of firm but fair dicing.

"It's hard, and I do appreciate it's very hard.

"But with Kevin there wasn't even contact with Hulkenberg.

"Nico hit me. Kevin did not hit Nico, he just pushed him very, very wide." 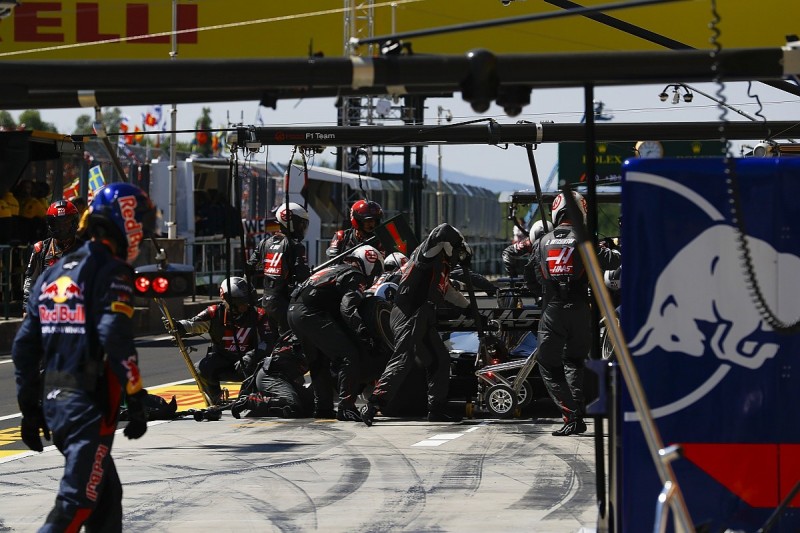 Grosjean ultimately had to retire from the Hungarian race with a cross-threaded wheelnut after a pitstop, which he was sanguine about.

"We had a front left puncture and had to come in, and then the loose wheel stopped the car," he said.

"We're all human, and it happens. I'd rather have it here than when we're in a good position somewhere else.

"What we need to understand is why we started the weekend so far off, and how we can get better prepared and be on the pace straight away."