Williams believes Force India was irresponsible not to retire Sergio Perez before his crash with Felipe Massa in the Canadian Grand Prix, a charge Perez has slammed as "misguided"

Perez complained of brake issues and electrical problems in the closing stages of the race.

He has been given a five-place grid penalty for the Austrian GP after the stewards judged that he moved over on Massa as the Williams was trying to pass for fourth on the final lap in Montreal.

Rob Smedley, Williams's head of vehicle performance, said he could not understand why Perez was still on track.

"Perez braked very, very early. Either he jinked his car to the left, or because of brake problems it jinked to the left, I don't know," Smedley said of the incident.

"I think it was lap 67, [he was] talking about having no rear brakes. So they told him to carry on if he could, and if you can't then to pit, which seems to me to be a fairly f***ing terminal problem to be honest.

"Why you leave a car out when you've got that sort of problem is beyond me.

"You saw two teams, one of which was ours, knowing when to call it quits - with Valtteri [Bottas] we had to tell him to back off and save his brakes and engine, but more critically brakes because it can be dangerous, and we lost points. That's life.

"Lewis Hamilton, because of his problems - brakes again - has to stop the car. That's a guy fighting for the world championship and he stops.

"I'm a bit peeved to say the least that this has happened. We were very lucky not to have someone seriously hurt."

But Perez hit back at Smedley, saying the Williams man had no understanding of his car's condition.

"It was perfectly driveable with just some adjustments and we showed it up until the moment in which we were taken out," Perez insisted.

"Other cars out there had been in similar conditions for way longer than us and they finished the race without problems.

"If someone thinks you can keep two Red Bulls behind for as long as we did with so-called 'terminal' problems, they are clearly misguided." 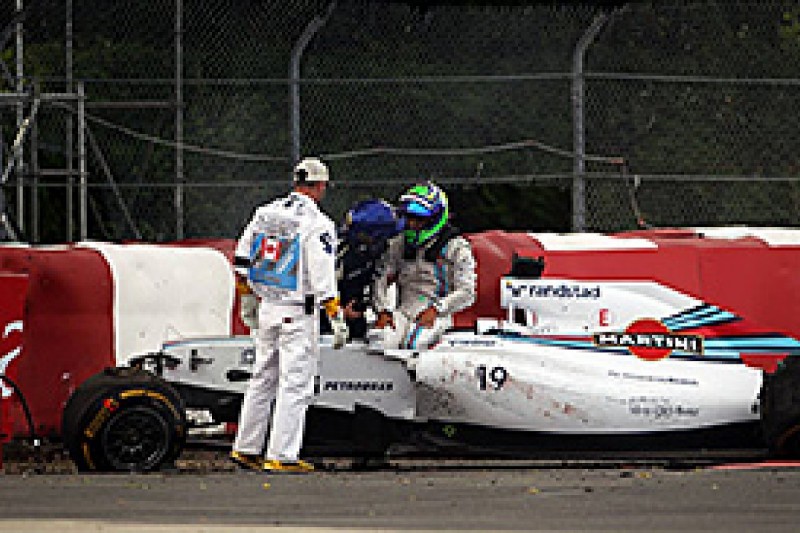 Perez also argued that he was not to blame for the crash, saying: "I just got hit from behind by Massa.

"There was plenty of space on the left of my car to attempt a clean overtake and I cannot understand why he had to scrape by."

"He goes on the inside to try to overtake and thinks 's**t! You can't overtake in Turn 1, let me get back onto the racing line', and then he hits him.

"How many other overtaking maneuvers on the inside into Turn 1 happened in this race? I'll tell you: zero. Why? Because you can't do it."