Sainz had made a poor getaway from fourth, but appeared to have consolidated fifth place as the pack turned into the left-hand apex of the Tamburello chicane.

But Ricciardo, who had been on the Spaniard's inside, understeered into the Ferrari's sidepod and spun Sainz into the gravel, before receiving a secondary hit from behind from Valtteri Bottas's Alfa Romeo.

After digging himself out of the gravel, Ricciardo continued to finish 18th and last of the classified runners, while Sainz retired for the second race in a row.

Speaking afterwards, Ricciardo explained that riding the inside kerb to give himself more space had caused him to wash into Sainz's car.

"I originally thought I'd got hit into Carlos, but I think it was originally me getting into him and then I got a bit more help after," he explained.

"From memory, so you know Turn 1 is going to bottle up, and I think I got onto the kerb, tried to give myself a little bit more space.

"But I remember as soon as I got on it I just started sliding right off it, and I was just sliding up, up and then at some point Carlos has to turn left to then make the right and we just came in and obviously I collected his rear.

"As soon as I hit him, I saw him spinning, and I was just like 'ah, yeah, it's not fun'. So obviously ruined my race but also his.

"I obviously have to be accountable for that, I don't think it was something where I was all locked up and ploughed into him, so obviously tricky conditions."

Explaining the incident from his perspective, Sainz told Sky: "For some reason Daniel went into the kerb, left him plenty of space, but I think he must have lost the front of the car and bumped into me with the unlucky situation that I got stuck yet again in the gravel. 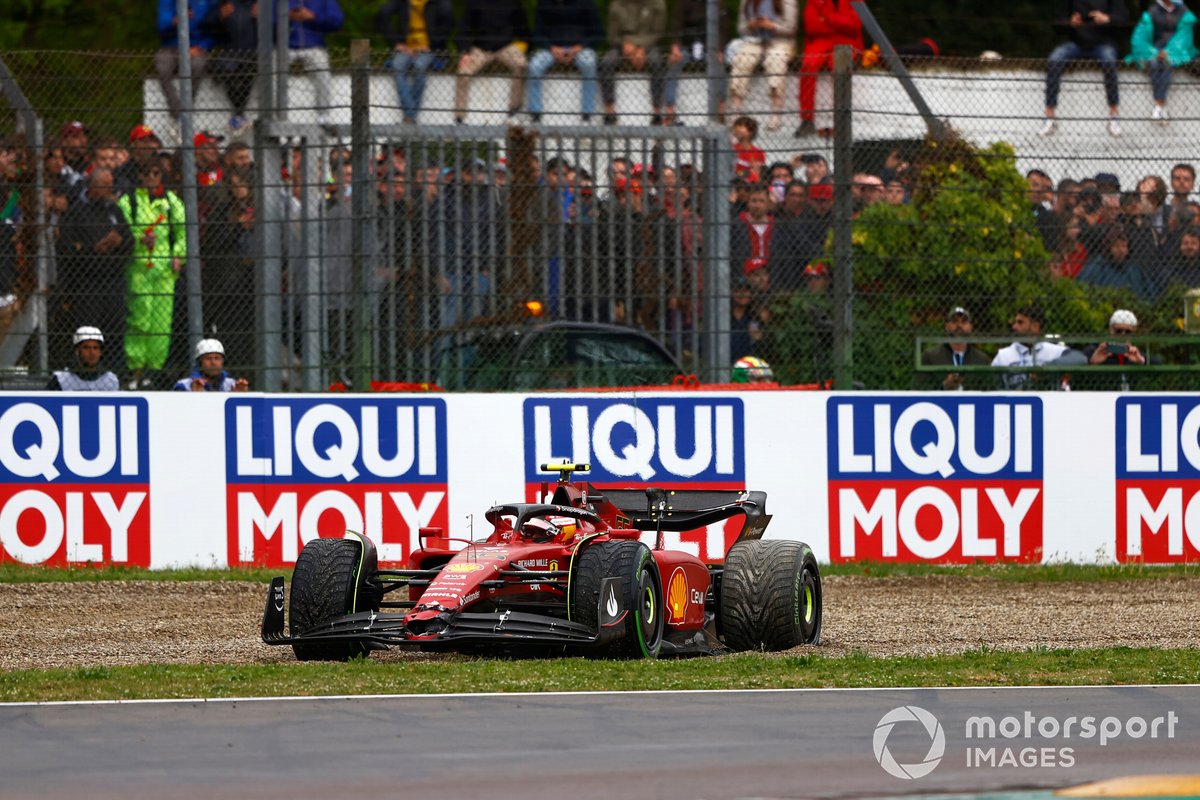 Carlos Sainz Jr., Ferrari F1-75, in the gravel after contact with Daniel Ricciardo, McLaren MCL36, on the opening lap

"It's definitely a tough moment and obviously I wanted to do a good race here in front of our fans.

"There was still 63 laps ahead so to get bumped out of the race in Turn 2 it is bad.

"But there is always these tough moments in the life of a sportsman, and it is my turn to go through them [now]. As long as I keep working hard, I'm sure the good moments will come."

Ricciardo said he would rewatch the footage to see if he could have avoided the incident, and confirmed he would apologise to Sainz.

"I'll watch the onboard now and see if there's something I could have done or if it was literally just that slippery that I don't know, there was maybe not much more [I could do]," said the Australian, who added that the rest of his race was "for the most part" a test session.

"In your head, you say like 'I could have been more cautious, gone a bit slower'.

"But as soon as you're that person, then someone else is going to be doing that to you or being on your inside.

"By being too conservative sometimes you can put yourself in more danger, by putting yourself in a sandwich or something, so it's tough.

"But I'll watch the onboard and go and see Carlos and apologise. An apology doesn't change anything, but at least for now that's all I can do."