Daniel Ricciardo hopes Renault will try and take more risks through the shorter 2020 Formula 1 season, saying there is "less to lose" for the midfield teams

After the COVID-19 pandemic forced the opening 10 races of the year to be called off, the new F1 season will begin with the Austrian Grand Prix on 5 July.

It is the first of eight races announced so far, and while F1 is confident of bolstering the calendar further, it will be significantly shorter than the 22-round schedule that was planned.

A shorter calendar is set to make retirements and mistakes more costly for teams, but Ricciardo is hopeful Renault will try and take some risks to capitalise on the altered schedule.

"The approach is just go and get some movement early [in the season]," Ricciardo said in an interview on Sky Sports F1.

"I think as well, [for] us in the midfield, there's a bit less to lose as far as risk and reward.

"I think we will take chances and hopefully come off with a few big results, whether it's eight races, 12, 15 - who knows how many we will get."

Renault finished fifth in last year's constructors' championship, losing out in the fight against McLaren to be the leading midfield team behind the top three of Mercedes, Ferrari and Red Bull.

Ricciardo said he expects the close battle between the mid-pack teams to continue through 2020, revealing Renault's analysis from winter testing showed them to be evenly-matched. 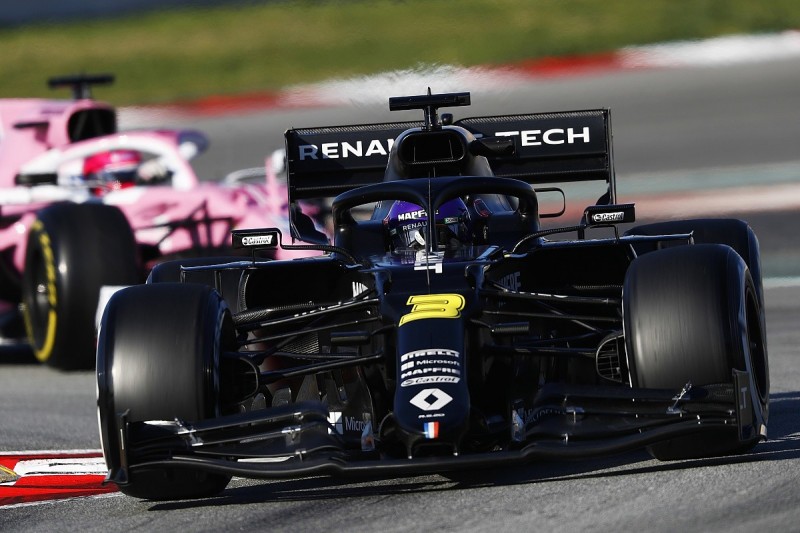 "I remember after we had the analysis of where we thought the field is and the spread from top to bottom, and the midfield, at least from our predictions, was like all within a tenth," Ricciardo said.

"That's what we took away from testing. I think there's going to be four or five teams within a very, very small margin.

"I would like to say we have closed the gap to the top, but of course the likes of like Mercedes are still going to be pretty tricky to overcome, at least early in the season.

"The midfield stuff, Racing Point, McLaren and all the other teams in there, it's going to be tight.

"I think we're going to be somewhere there, but it's really a bit of a flip of a coin at this moment in time as to who is going to come out on top."

Ricciardo drove an F1 car for the first time since winter testing in a private run-out with Renault last week at the Red Bull Ring, the track that will host the first race of the season.

The Australian said it was useful not only to get back into the rhythm of driving an F1 car, but also to try and learn from a difficult race at the track in 2019 when Renault failed to score any points.

"It was nice, even if it's not completely relevant to what we're going to have in a couple of weeks," Ricciardo said, having driven a 2018-spec Renault F1 car in the test.

"It was nice to not only get on the track, but for me to shake off the cobwebs and interact with the team again, and just to start getting back into work mode from a racing point of view.

"I've been training physically the last few months, but obviously haven't driven an F1 car. To get my mind back into that state was cool.

"Austria was really our worst race last year, so to have a chance to go back there and have two races, we're going to take that as a positive and as a chance to learn and improve on last year, as opposed to saying 'well this isn't going to be a good one for us, this season is going to be a slow start'."