On the first lap of the Sao Paulo Grand Prix, Ricciardo appeared to make a late lunge on the Haas driver into the tight Turn 8 right-hander.

Ricciardo tried to back out of the move but misjudged the situation and couldn't avoid tagging Magnussen's right-rear, which sent the Dane into a spin.

Magnussen's car then rolled back into the path of Ricciardo, punting the Australian into the barriers and meaning both drivers retired on the spot.

The FIA's stewards investigated the incident after the race and deemed that Ricciardo was "wholly to blame" for the collision, which they felt it did not deserve the more lenient treatment of typical first lap incidents.

Therefore, Ricciardo will serve a three-place grid penalty at next weekend's season finale in Abu Dhabi. Ricciardo also gets two penalty points on his licence, bringing his total up to eight, but that's a rather academic punishment as the Australian won't be on the F1 grid next year.

Judging the incident, the stewards noted: "Ricciardo made contact with Magnussen at Turn 8 on lap one, which caused Magnussen to spin, and subsequently both cars crashed. 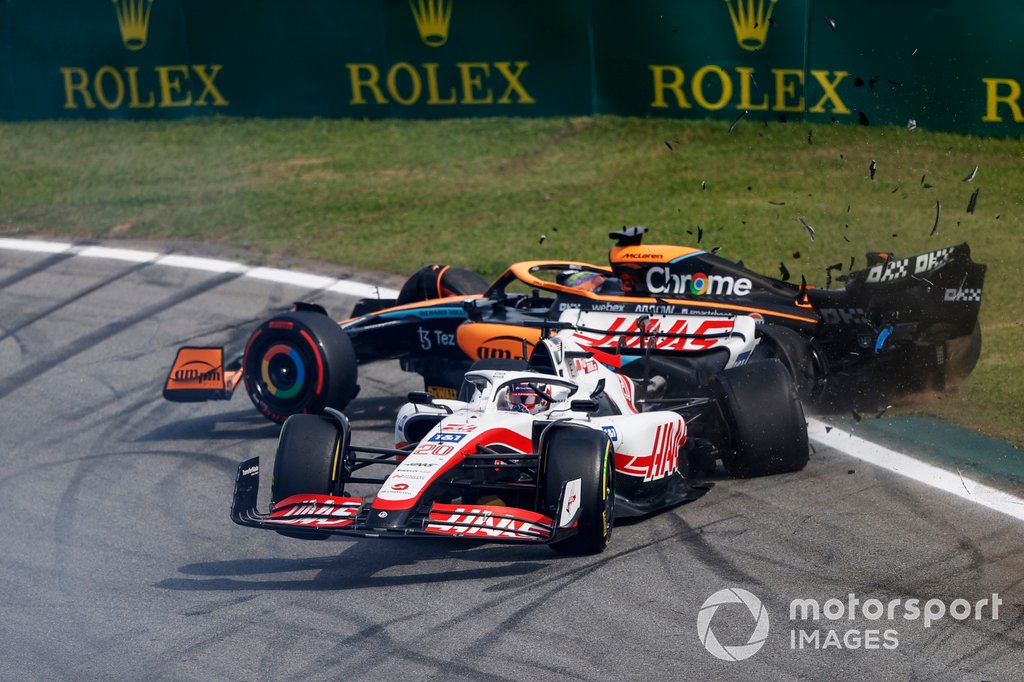 "McLaren explained that in their view Magnussen was slower at the exit of Turn 8 than the other cars ahead, which made it difficult to judge the closing rate, as the two cars interacted.

"Ricciardo explained that in his view, he had slowed sufficiently that he was not going to collide with Magnussen and that he slightly misjudged it.

"The Stewards determined that Magnussen drove in a normal manner for that corner, and that he did not make any erratic moves. Thus the Stewards determine that Ricciardo was wholly to blame for the incident and issue a drop of three grid places for the next event."

Ricciardo's teammate Lando Norris also retired from the race with a presumed engine issue, meaning McLaren's midfield rival Alpine is all but guaranteed to seal fourth in the constructors' championship.

Following his shock pole on Friday, Magnussen's Sunday ended miserably after just half a lap. Still, Magnussen's Q3 heroics helped him bank a point by finishing eighth in Saturday's sprint race, in which he inevitably fell through the order.

Why Verstappen was penalised for clashing with Hamilton in Brazilian GP