The 10 Formula 1 teams were split 50:50 in a vote on potentially returning to 2018 tyres in the crucial meeting in Austria, meaning there will be no immediate changes

The rules require seven teams to support a change to the tyre specification and, as expected, there was no majority in favour in the meeting held ahead of Friday practice at the Red Bull Ring.

It is understood that the FIA will use Friday's discussion to create a document for further consideration, although it appears unlikely that a full return to 2018 tyres will ultimately be agreed.

The meeting was the first formal discussion about the proposal to return to the thicker treaded tyres used last season that has been pushed by Red Bull Racing and Christian Horner.

All team bosses were present, along with Red Bull motorsport advisor Helmut Marko, plus Ross Brawn on behalf of the F1 organisation, the FIA's technical boss Nikolas Tombazis, and Pirelli's Mario Isola. 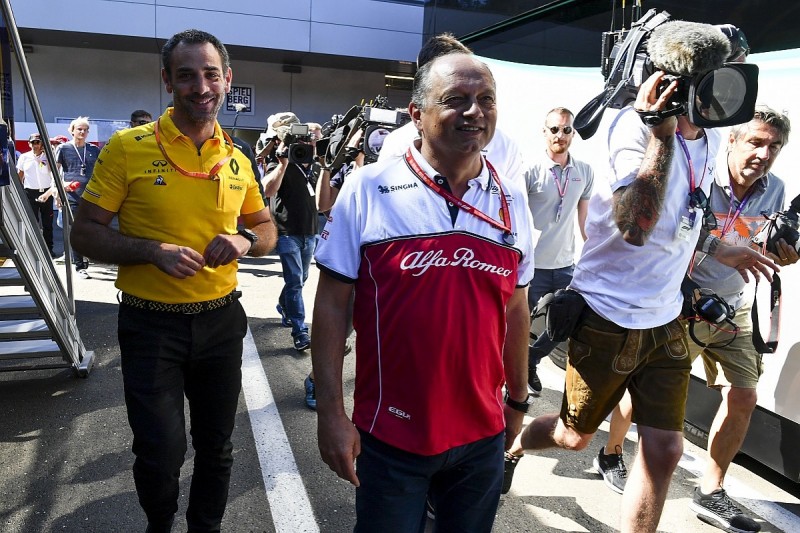 The drivers were represented by Grand Prix Drivers' Association chairman Alex Wurz, along with his fellow directors Romain Grosjean and Sebastian Vettel. Lewis Hamilton and Charles Leclerc were also present.

The discussion allowed all parties to put their views across. Pirelli stressed the safety aspects, pointing out that this year's thinner tread was introduced to stop blistering and chunking. Isola also noted that a change of tread thickness would still entail a small operating window.

Sources said that it was a generally positive discussion, with teams agreeing that a wider operating window with less degradation would be desirable, and that those with less downforce should not be penalised by an inability to get their tyres working.

In the vote on the main proposal Red Bull and Ferrari - joined by their associated teams Toro Rosso, Haas and Alfa Romeo - were in favour of a return to 2018, although some sources said Alfa team principal Fred Vasseur indicated that he did not have a clear cut view.

Mercedes, McLaren, Williams, Renault and Racing Point all voted against the change.

One suggestion was that 2020 tyres should be tested on Fridays of race weekends this year, if production schedules allowed, but no firm decisions were taken.