Renault has found more than half a second of performance from its Formula 1 power unit over the winter, according to engine chief Remi Taffin

The French manufacturer has endured a torrid time over the past two F1 seasons, suffering a multitude of performance and reliability problems with its V6 turbo hybrid.

Renault has made further refinements to the engine specification it introduced for last October's US Grand Prix, which originally disappointed Red Bull when tried it during the penultimate race in Brazil.

Taffin has set a target of halving the gap to Mercedes this year, and revealed the revamped power unit, which is now at the specification Renault will use for 2016's first race in Melbourne, has delivered a decent chunk of laptime.

"Now we've got to a point where we know we can get there," said Taffin.

"The concepts are on the table, we have some proven facts from the dynos, and we proved that bringing more than half a second over the winter is visible. We did it.

"To be fair it's very difficult to compare to Mercedes. They are hiding their games and obviously going to raise it when we get to Q3.

"I guess relatively we should be closer to them, but the gap will still be there and it's fair to say - depending on how we assess this season and the steps we can fit in - the aim is still to be starting '17 in a position to be fighting with them, if we are able to produce overall a good car.

"If we are still working with Red Bull maybe they could [also] be contenders again.

"I don't think they are going to be losing their skill in building winning cars."

Renault Sport managing director Cyril Abiteboul has confirmed the half-a-second gain to date is part of a wider target for this season.

"We are aiming to gain one second over the season engine-wise. That's the target, that's the plan," he said.

Abiteboul feels Renault has closed the gap to rivals Mercedes and Ferrari, although concedes to being in the dark when it comes to Honda.

"We've no obvious indication so far as to what the others have made. I've heard things on the grapevine, but nothing for sure," said Abiteboul.

"They are still a bit of a mystery for us." 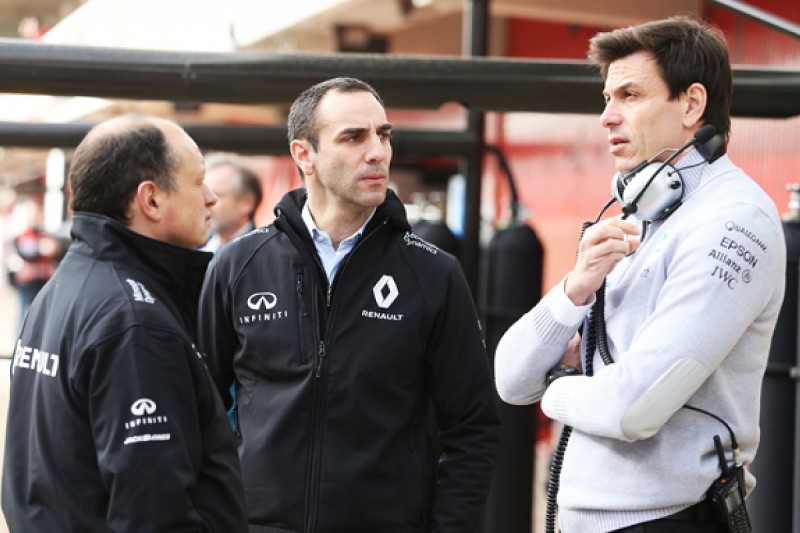