Palmer showed his strongest form of a difficult season so far at Spa, outpacing team-mate Nico Hulkenberg in practice and qualifying before suffering a suspected loss of gearbox oil pressure after reaching Q3.

That sparked a gearbox change and a grid penalty that meant Palmer started 14th on the grid, and he could only finish 13th in the race after having to start on used ultra-softs and suffering a clash with Fernando Alonso that he likened to his team-mate's tussle with Kevin Magnussen in Hungary.

Permane told Autosport: "He was like a different guy this weekend.

"I hope that race hasn't dented him and we can just go to Monza and he can carry where he left off because he was loving driving the car, he didn't really make any changes, he was happy with it all weekend.

"It was very good. It was undoubtedly his best weekend of the year.

"He's gone from being five or six tenths behind Nico to three or four tenths in front of him this weekend, up until the race, where Nico was back on top of things."

Though Permane admitted it was confusing that Palmer "seemed to go backwards in the race", the team had not completed a meaningful debrief at the time. 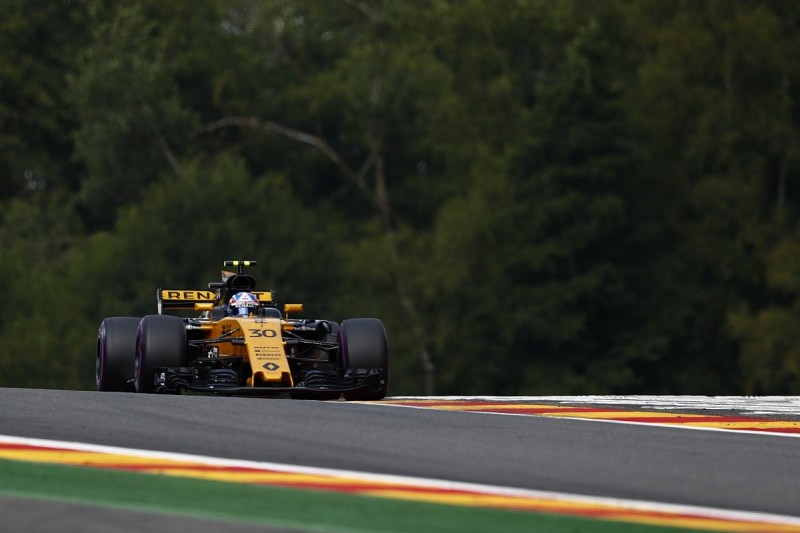 Palmer, who is still searching for his first points of the season, described it as a "'back to normal how I hoped to start the season' kind of weekend".

"I felt confidence in the car that I haven't felt all season really," he told Autosport.

"I could attack, I could push and I could chuck it around without thinking it's going to put me in the wall at some moment.

"It was a nice change compared to pretty much most of the season."

The Briton has been under intense pressure this year, and his Q3 failure means he is still yet to outqualify his team-mate in the first 12 races of the season.

Work towards Robert Kubica's potential return to F1, which included a day of testing the Renault R.S.17 in Hungary, has also added to speculation about Palmer's future.

Palmer said in the build-up to Belgium that his focus was on race-by-race performance not saving his seat for 2018, which he reiterated ahead of this weekend's Italian GP.

"I've had this pressure for a year and a half and it's always the same," said Palmer. "I'm not bothered.

"I'll do the same for Monza - turn up, try and get a great result and not even focus on Singapore, the future, the past or anything."